The competitive world has been pumping out eSports eye candy for years now. And while it’s all well and good to have new games to sink into and place a bet on, there does come a point where we become a little weary of generic shooters and predictable game modes. Luckily for us, however, a solid game does surface every once in a while — especially at eSports conventions. Just take Rocket League, for example. Did anyone see that coming? No, not really.

Booting up as a free-to-play title, Rocket League quickly rose through the ranks and established itself as a force not to be reckoned with. As a genuinely addictive title with a captivating concept to bolster it, the soccer-racer extravaganza wasn’t exactly holding back when tearing up the market. Fast-forward to the present day and the game has amassed global recognition and a whole series of competitive events to host under its belt.

Rocket League: In a Nutshell

The best way to describe Rocket League is to coincide with Psyonix’s description of the game on launch: soccer…with rocket-powered cars. That’s basically the idea behind the global hit. Six players will drop into a neon-heavy arena with an enormous ball to gain possession of. Each team has a goal which they must defend from the opposing team, and, well — you get the idea. It’s soccer with cars.

Typically, a Rocket League match will be played in a 3v3 format over a 5 minute period. Before launching each match, the players are able to choose a vehicle to use for the game along with a few customization options. However, while there is a slew of options to personalize your rocket-powered car — there isn’t a specific tool that can give you an advantage in the game. So, that basically means every player is on the same starting grounds — with no special treatment for select users, regardless of status.

The beauty of Rocket League is that it’s played on all platforms across the board. And as far as the competitive community operates, the game can be enjoyed on both console and PC. But having said that, most tournaments do tend to favor the PC port, with pre-approved controllers to play with (whether it be a DualShock or Xbox pad). To shed a little extra light on that — roughly 80% of professional players will ideally aim for a controller, whereas the remaining 20% will opt for KBM.

While Rocket League may not be as big as FIFA (or any other competitive title for that matter), there is quite a lot of interest in the platform that supports it. Of course, being a relatively young game in the eSports world, it comes as no surprise as to how small the game is when compared to other heavy-hitters. That being said, Psyonix and a whole heap of third-party hosts do aim to shovel tournaments and local competitions into the scene every once in a while, with the Rocket League Championship Series (RLCS) acting as the frontrunner.

RLCS is divided into four leagues (North America, South America, Europe, and Oceania). Each division will battle it out and ascend the ranks over the course of a season, with the top four teams from each bracket going on to the RLCS finals. Fast-forward to the end of the season, the playoffs go on to host the sixteen finalists over an all-out battle for the podium, with bragging rights and cash prizes for the best team on the block. 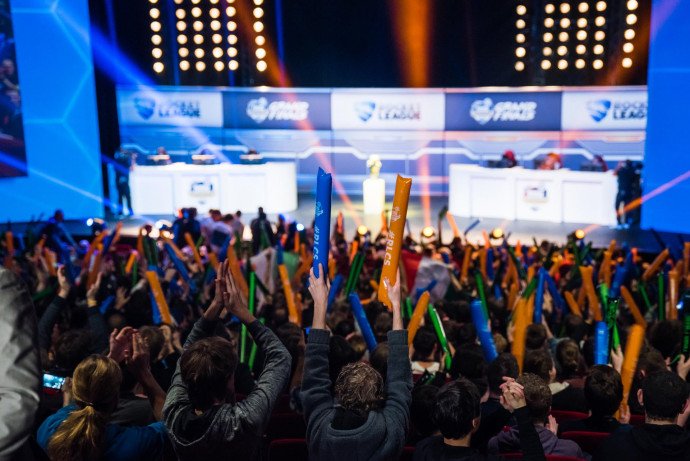 The Rocket League Championship Series hosts the best of the best from North America, South America, Europe and Oceania.

Wrapping your head around the fundamentals of Rocket League isn’t all that bad. After all, it is, in a nutshell — soccer with rocket-powered cars. The real problem lies with the actual teams and the very tactics that drive them. Of course, betting on the faction that hoards the most wins might always seem like the best way forward, but with the number of professional teams that back the platform — locating a guaranteed victor isn’t remotely possible. That’s why it’s essential to keep up to date with the newcomers and existing teams for each passing season. Sure, it can be a lengthy process — but it is a necessary one if you aim to snatch the upper hand.

As far as learning the basics go, Rocket League doesn’t require a boatload of gameplay in order for you to become the next rocket-powered whizz-kid. And so, whilst we would usually suggest tucking into the game and running a few rounds first-hand — most knowledge can be acquired through the likes of SickOdds and RLTracker. Knuckle in on a few major streams and early tournament playoffs and you’re on your way. Of course, it is worth narrowing in on the RLCS Finals, as these events do showcase the very best in the business.

Looking to place a bet? Now would be the right time to sift through the odds for the upcoming tournaments. You can delve into the statistics and latest odds here.

Had enough of Rocket League? Looking to gain an edge elsewhere? Why not take a look at one of these:

Related Topics:BettingeSportsRocket League
Up Next