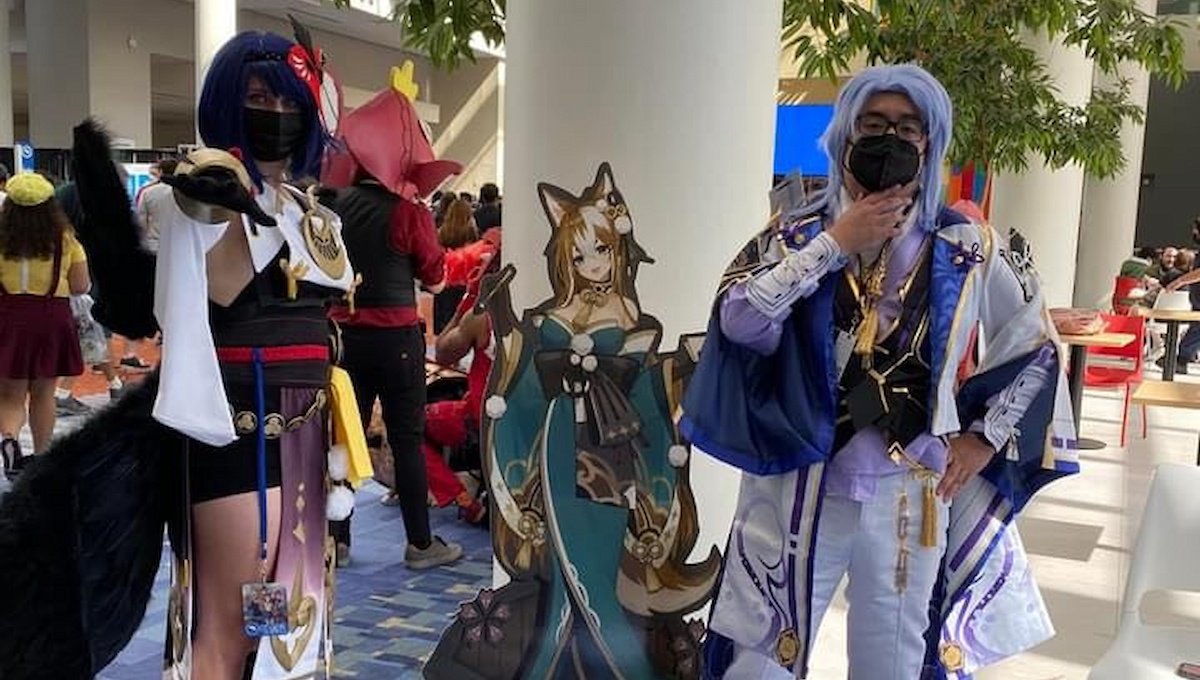 Genshin Impact has taken the world by storm, so it’s no surprise that conventions are now filled with cosplayers and props from the game. This summer, the massively popular Otakon hit over 40,000 plus attendees, including a friendly fellow named Ryne who was traveling around with the darling Ms. Hina. Ryne was kind enough to let fans of the game take pictures with the cutout, who was a replica of the end-game standee made to represent the female version of Gorou.

As fate would have it, though, on the second night of the con, Ms. Hina found herself kidnapped. Ryne quickly sprang to action and pleaded on social media for help finding the darling prop. The response from Otakon attendees was quick. The captors were tracked down, and Ms. Hina was found safe and sound. The fan reaction to finding this character was simply astounding and has attracted a lot of attention around the web.

Interview With The Owner of Ms. Hina, Ryne 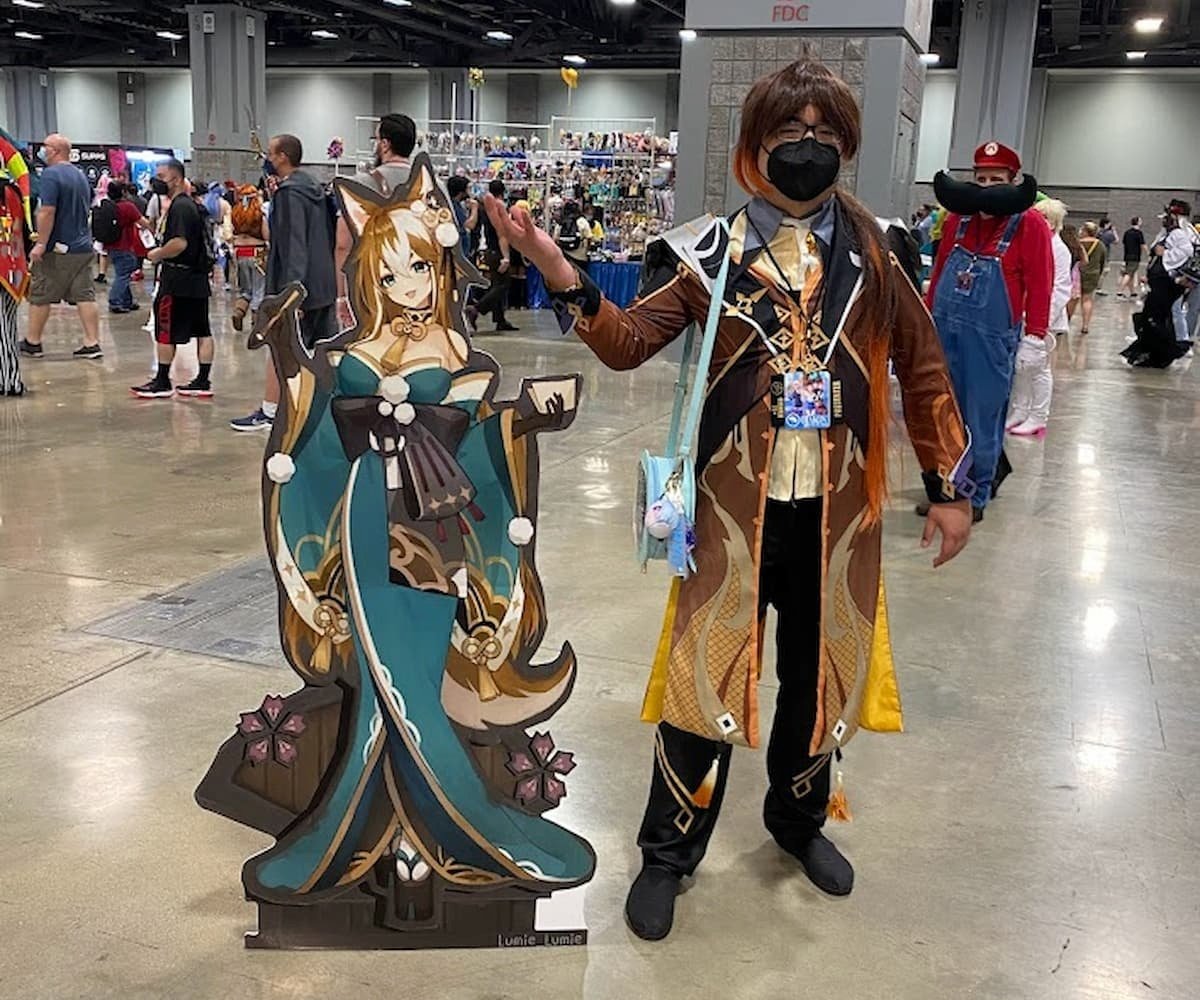 How long have you had Ms. Hina?: I had Miss Hina printed and created around the beginning of July, and it was printed and delivered to me less than one week after I ordered her. I was initially inspired by a Miss Hina that someone made and brought to Anime Central in Chicago in May, and knew that this is something I wanted to make and bring to my next convention, which was Otakon.

When did you realize she was missing?: I was carrying Miss Hina around for almost the whole weekend, starting with my Japanese Commercials panel I presented on Friday morning, and took her everywhere–the dealer’s hall, artist alley, public spaces of the convention, and even into panels. My hotel roommate, a vlogger who was cosplaying Mona on Saturday, took her for a good part of that day, too for content. Every night, I’d usually spend time at the Marriott Marquis lobby bar, where Miss Hina was very well received by people there. Saturday night, rather than going to late-night panels, me and my friends.

I decided to stick around the Marquis bar since the atmosphere was electric and everyone was having fun, especially with Miss Hina! Around 2 AM, when security was clearing out the lobby and atrium, my friend pointed out that Miss Hina was missing and nowhere to be found. Hotel security already sealed off the atrium and wouldn’t let us look for her, so I went up to my room, dejected that either someone stole Ms. Hina, or she was lost somewhere.

Did the community’s immediate response surprise you?: It did! I knew that plenty of people saw and took pictures of and with Miss Hina all weekend, especially to all the Genshin meet-ups and photoshoots, so when I put out the message that Miss Hina was missing on Facebook, Instagram, Twitter, Discord, and Reddit, a lot of people seemed sad and upset that she lost or stolen, and some even jokingly offered to try to hunt for her and her captors. Hundreds, if not thousands, of people saw her that weekend, so she definitely made an impact. Even if we didn’t get Miss Hina back, I was already happy to see that so many people cared about a silly sheet of foam board of an anime game dog girl and that she was able to give people some enjoyment during the con.

How did the return of Ms. Hina go?: On Monday morning, after many of us already left the con, I got messages and comments on Instagram and Facebook saying they spotted people with Miss Hina taking selfies with her in the lobby of one of the hotels in the area. Someone was then able to take a photo of the car and its license place that Miss Hina and her kidnappers got into. Sure, I had some sentimental attachment to Miss Hina after having her the whole weekend, but this wasn’t worth making a criminal issue or anything, and I was already prepared to have a new Miss Hina printed for next time (with an AirTag!).

Later that Monday afternoon, someone sent me screenshots and Tweets that were still up posted by Miss Hina’s captors with her in their hotel room from, I’m guessing Saturday night/Sunday morning. After conferring with an Otakon Facebook group mod and an Otakon Discord moderator, I decided to tweet back at her captors and shared the screenshots and link to the Tweets to the Otakon 21+ Facebook group. The reaction was instantaneous, and after they got dragged on Twitter and social media, I got a DM from one of her captors offering to have her returned to the Marquis front desk within an hour or two.

Luckily, I work in downtown DC, so it wasn’t a problem to stop by there after work to ransom her. I want to thank the people who stole Miss Hina for returning her in one piece and urge everyone to let it go and move on. Her captors were very apologetic and were just caught up in the fun and the moment. 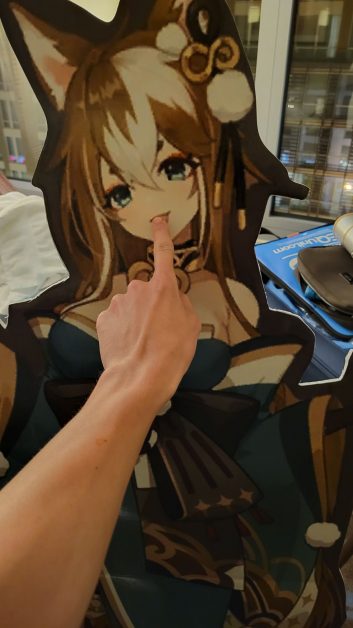 Image from Otakon 2022 by @kirakaiya 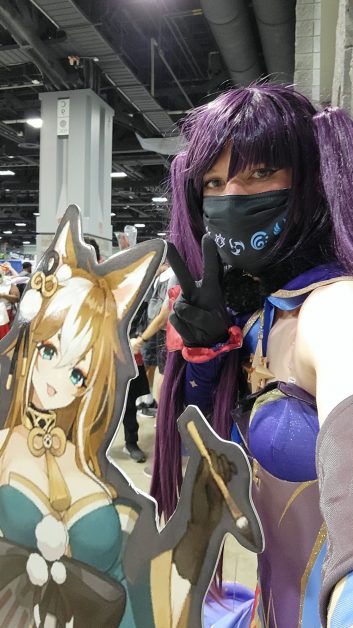 Image from Otakon 2022 by @kirakaiya by

Do you plan to continue the con circuit with Ms. Hina?: I feel like Miss Hina has now become kind of a meme now for Otakon-goers and the people on the 21+ Con Groups for MAGFest and Katsucon seem excited to see her at those cons! I actually expect more Miss Hinas to be created and show up, but I’m happy to have what I think is the first in the East Coast con circuit.

Any advice you can give to con-goers now that you’ve experienced this ordeal?: It’s easy to have a little too much fun at a con, getting caught up in the moment with or without alcohol, so I think it’s just important to have respect for other con-goers and their property. I’m also happy to see the con-going community rally around something like this and will always appreciate the brief connections and long friendships that conventions and shared fandom bring. Also, please AirTag your props, just in case.

A special thanks to @seventhsages and @kirakaiya for allowing us to use them in our cover photo and gallery photos. To learn more about Ms. Hina and Ryne’s adventures, head on over to his Twitter or Instagram.

Related Topics:Genshin Impact
Up Next

Genshin Impact: An Interview With Christina Costello The Voice of Collei