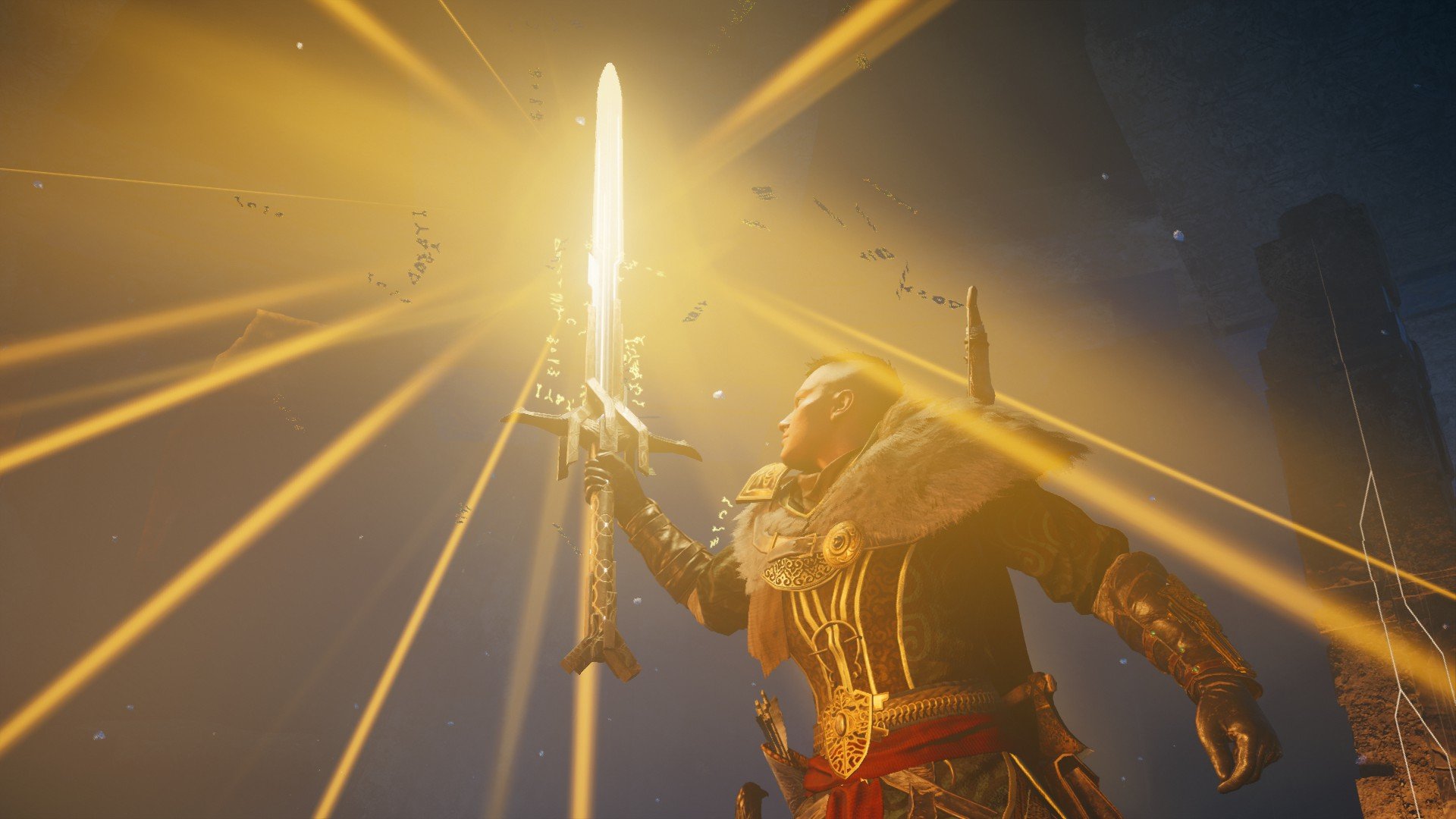 If you’re planning on conquering Britain and claiming your rightful place in Valhalla, then guess what — you’re first going to need to unlock all the best weapons in Assassin’s Creed Valhalla, and then some. Only then, once bombarded with lofty chainmail attires and diamond-crusted two-handed axes, will you be able to scrape the Viking-infused island of all its plunder and power. But as with any RPG, obtaining said legendary weapons does come loaded with a few provisos. Not that this is a problem, though, especially if you’re planning on sticking around for the long haul.

Anyway, if  you have slugged your way through the Dawn of Ragnarok DLC already, then we’ll gladly give you another quest to conquer, if only to tide you over as you gradually mop up all the final story arcs Valhalla has to offer. Saddle up, Viking — it’s time to go hunting! 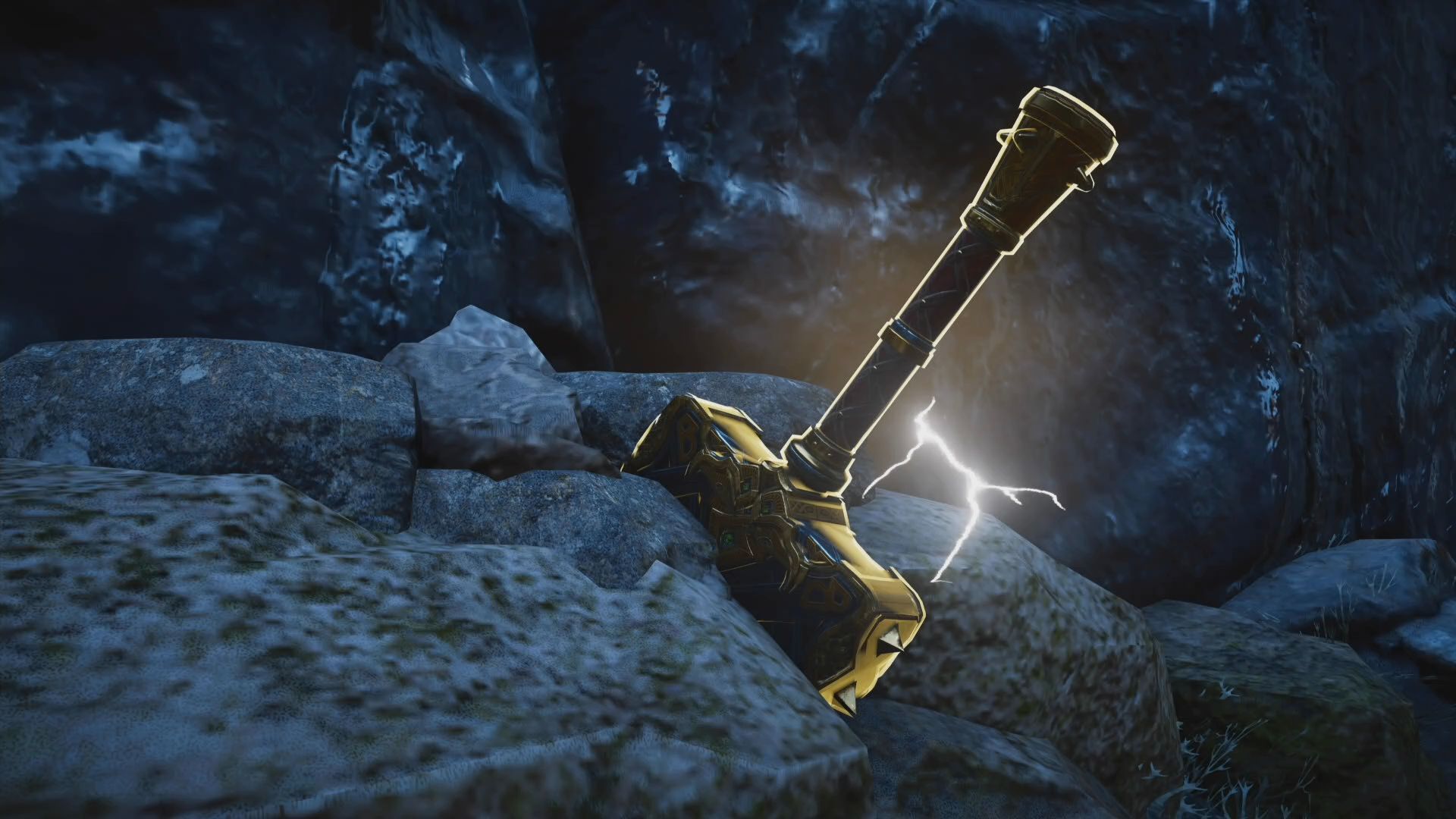 If you’ve hacked your way through most of the quests and story arcs in Valhalla, then you’ve probably eliminated your fair share of Order of the Ancients’ cult members, too. And that’s good, as dismantling the hierarchy and claiming every Templar for your burn book will not only win the favor of the brotherhood, but also net you one of the best and most powerful weapons in the game: Thor’s Hammer.

Shortly after beating the prologue, Eivor will be introduced to The Hidden One, who will present the Viking with a roster of mystery Templars that are dotted around England. If you can identify each and every one of them and remove them from the monopoly, then you’ll bag the legendary hammer, which will no doubt guarantee you a place amongst the Viking wardlords of Valhalla. Arguably the most well-known mythical greatsword in the world, Excalibur finds a place atop a small mountain Assassin’s Creed Valhalla. The problem is, contrary to popular belief, you can’t just waltz right up to it and pull it from the stone — regardless of how strong Eivor may or may not be. Unfortunately, to obtain the legendary weapon, you will need collect all 11 tablets, which can be found with members of The Order of the Ancients, and stashed away in various caverns around Britain.

Of course, it goes without saying that obtaining Excalibur automatically gives you bragging rights for all eternity. And not to mention that it also comes with a well-balanced selection of powerful perks and novelty features, too. Therefore, if you’re set on picking the bare bones of Viking England and don’t have anywhere to be, then be sure to set aside enough time to hunt down those tablets. Excalibur awaits! 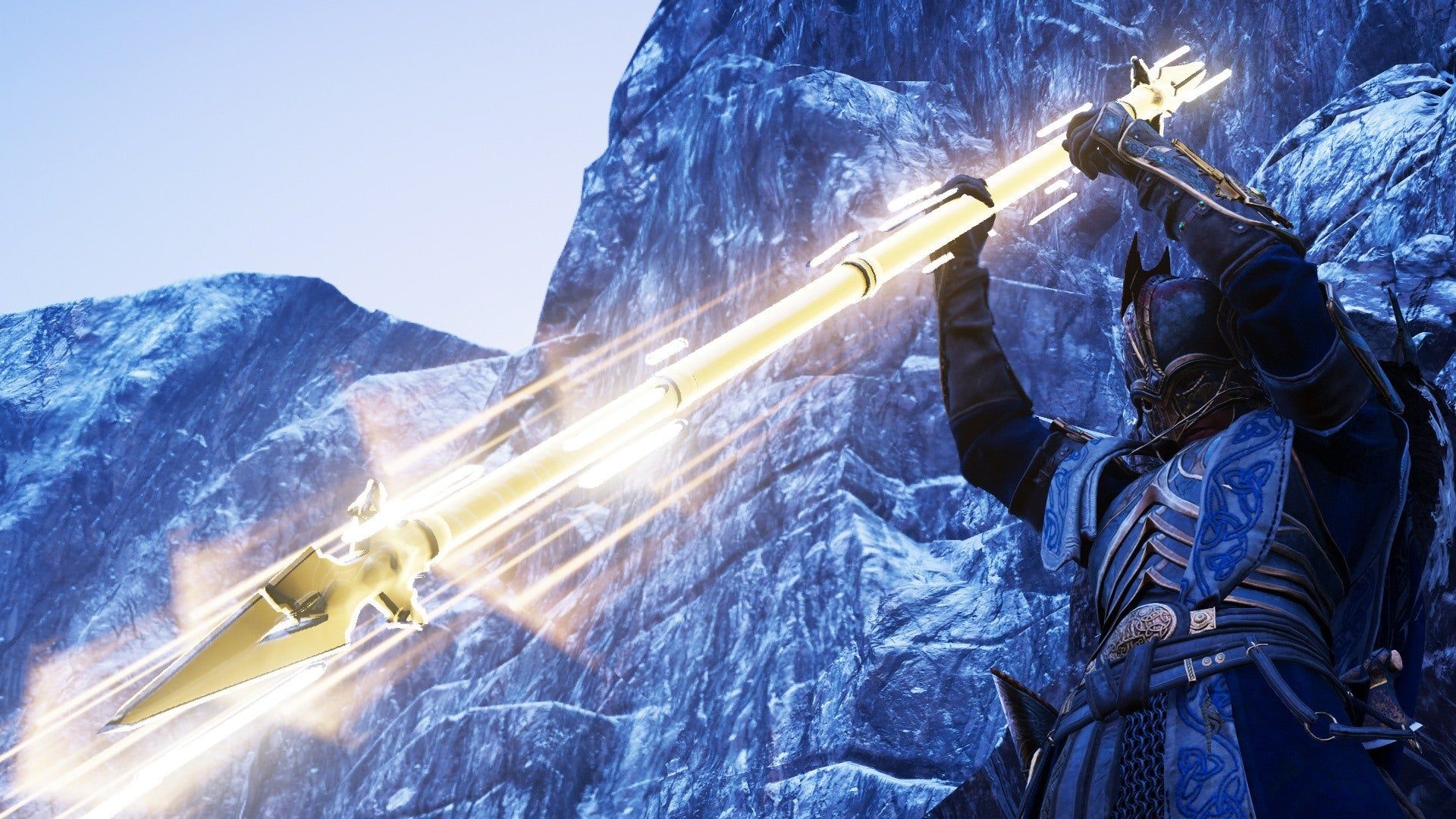 While you won’t be able to go tearing off Odin’s beard anytime soon, you will be able to acquire the next best thing: his spear, Gungnir. And while it doesn’t technically come included as part of Eivor’s initial arsenal, it can be unlocked by simply spooling through the main story quests. The problem is, you’ll have to finish every available story arc and pledge in England to get it. And even then, there are a couple of additional steps you’ll need to take.

To obtain Odin’s Spear for your loadout, begin the final story quest “A Brother’s Keeper.” Activating this quest will take you back to Norway, where you will have the choice of following Sigurd through an icy cave that branches off to the right, or taking the alternative route to the left. If you stick with the latter, you will find yourself hitting something of a dead end where, lo and behold, Odin’s Spear sits idly by in an icy wall. 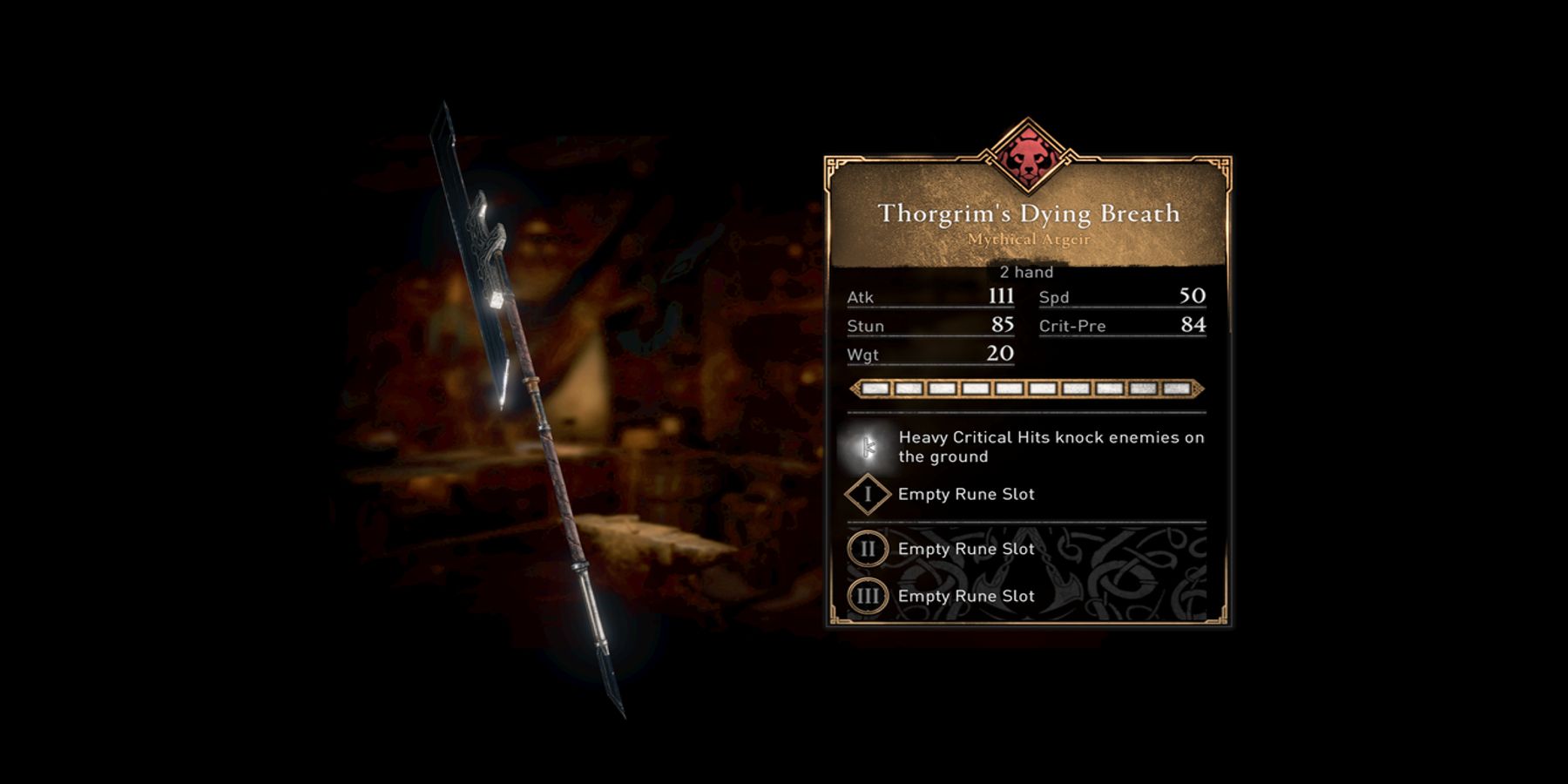 Thanks to the Dawn of Ragnarok DLC being absolutely loaded with hearty content, Eivor’s arsenal can be pushed to an entirely new level, which can essentially make your time in Britain something of a breeze. To make it as easy as it can get, though, you will need to acquire one of two legendary weapons: Thorgrim’s Dying Breath, or Fiery Warsong (which we’ll come to later), both of which come equipped with some of the best stat boosters in all of Valhalla.

Thorgrim’s Dying Breath can be found in a Wealth chest in Gapius, which is a set of waterlogged buildings to the south-west of the Midalstifla dam. To unlock the chest, you will need to obtain its key, which can also be found in the nearby buildings, to the south-west of the village. This can be done relatively early on in the campaign, so it’s definitely worth checking out. And if you happen to find yourself in the Svaladal region, especially, then you should make it an essential pitstop. 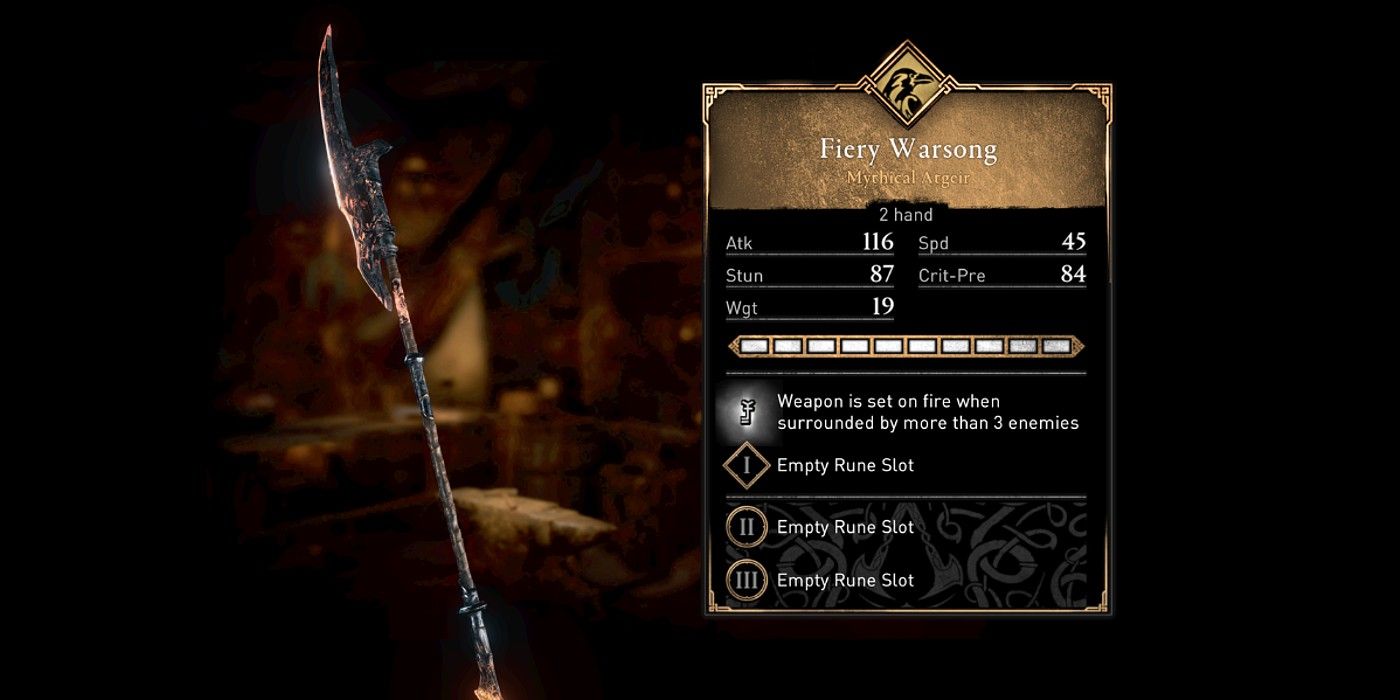 Another one of Dawn of Ragnarok’s finest weapons is the Fiery Warsong, a coveted blade that bears the power to ignite enemies when within proximity of Eivor. Knowing this, and also having it preloaded in your arsenal can, of course, give you a real upper hand in just about any battle you onboard, which can also make most, if not all featured top-shelf foes a real doddle.

To get your hands on the Fiery Warsong sword, you will need to defeat three bosses: Throttigr, Rammr, and Trawll, all of whom carry a single piece of the broken weapon. Once all three pieces have been acquired, simply visit any Dwarven Blacksmith to have it forged.

So, what’s your take? Are there any weapons you’d recommend picking up? Let us know over on our socials here or down in the comments below.

Sonic Frontiers: Everything We Know