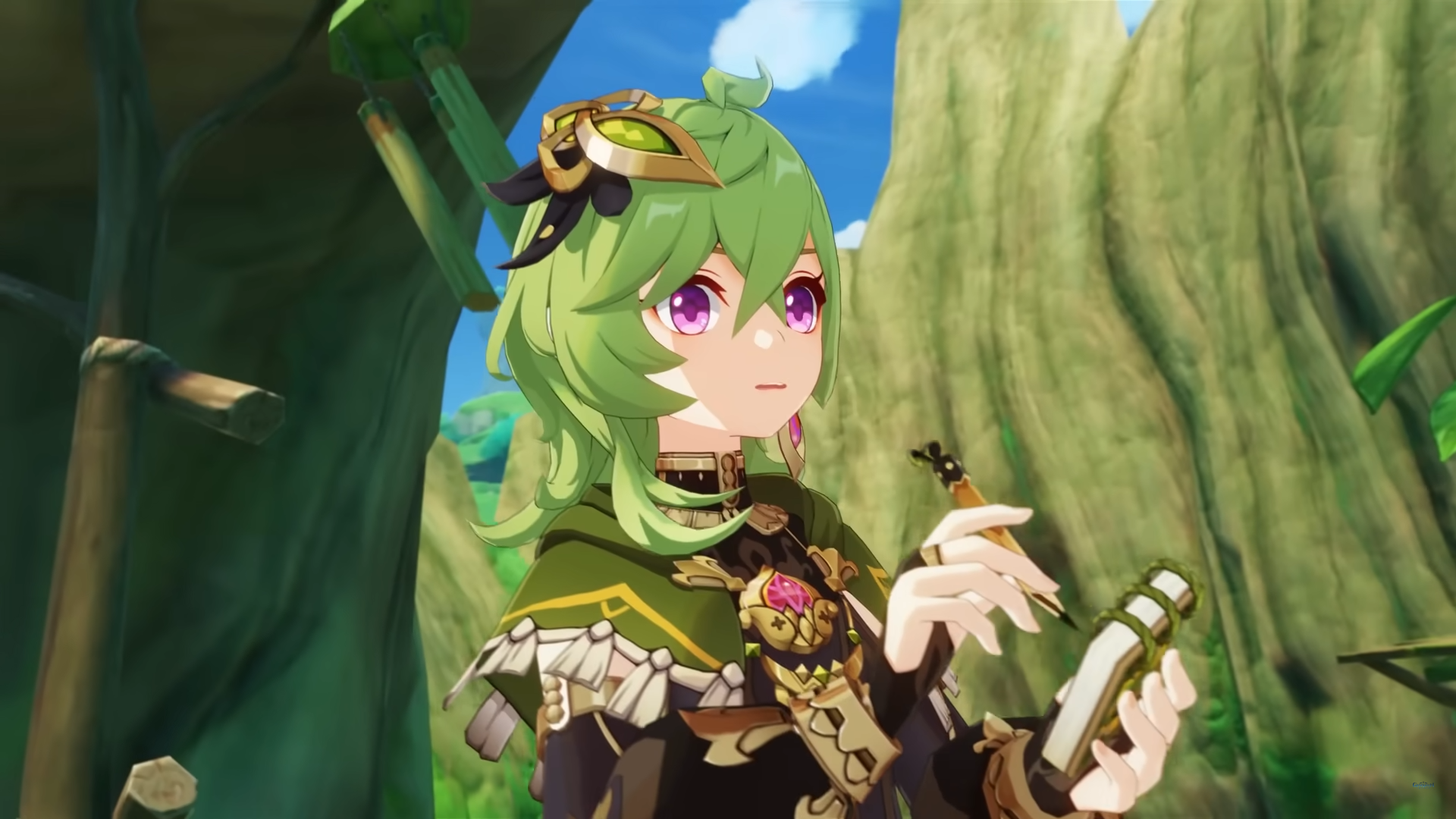 To celebrate the release of Genshin Impact’s Sumeru and the first four-star Dendro character Collei. We sat down with Christina Costello, the talented voice behind Collei, to talk about the character. Below we go over how Christina got the role, her relation to Collei’s personality, and of course, her feelings on a Collei and Amber reunion.

How Did You Get The Role For Collei?: I got an email, and it was an email for an audition I didn’t recognize. At the time, I had a Kidney Stone and almost didn’t want to audition, I did it anyway. I was told I got cast, but not for what. I walked into the session, and it was Collei.

Do You Play Genshin Impact?: So, I loved the manga so, so much that when I saw people getting cast, I decided not to play it. Because if I really liked it, and I was attached, I’d be in it. That was just my luck. So that was my theory. I avoided the game, but I read about the game. So yes, I knew about it, but in a really roundabout way.

How Does it Feel to be One of The First Dendro Characters?: Super Exciting, I did eventually start playing the game, and I have a lot of fun with the reactions. I can see the excitement that surrounds having a new type of vision holder type to add to the reactions. It’s a fun playstyle to be able to quickly swap people out. So being able to be one of the first characters to introduce those reactions and show how different and cool it can be, is super cool. Collei is a little nugget, so I’m happy to be a Dendro nugget. 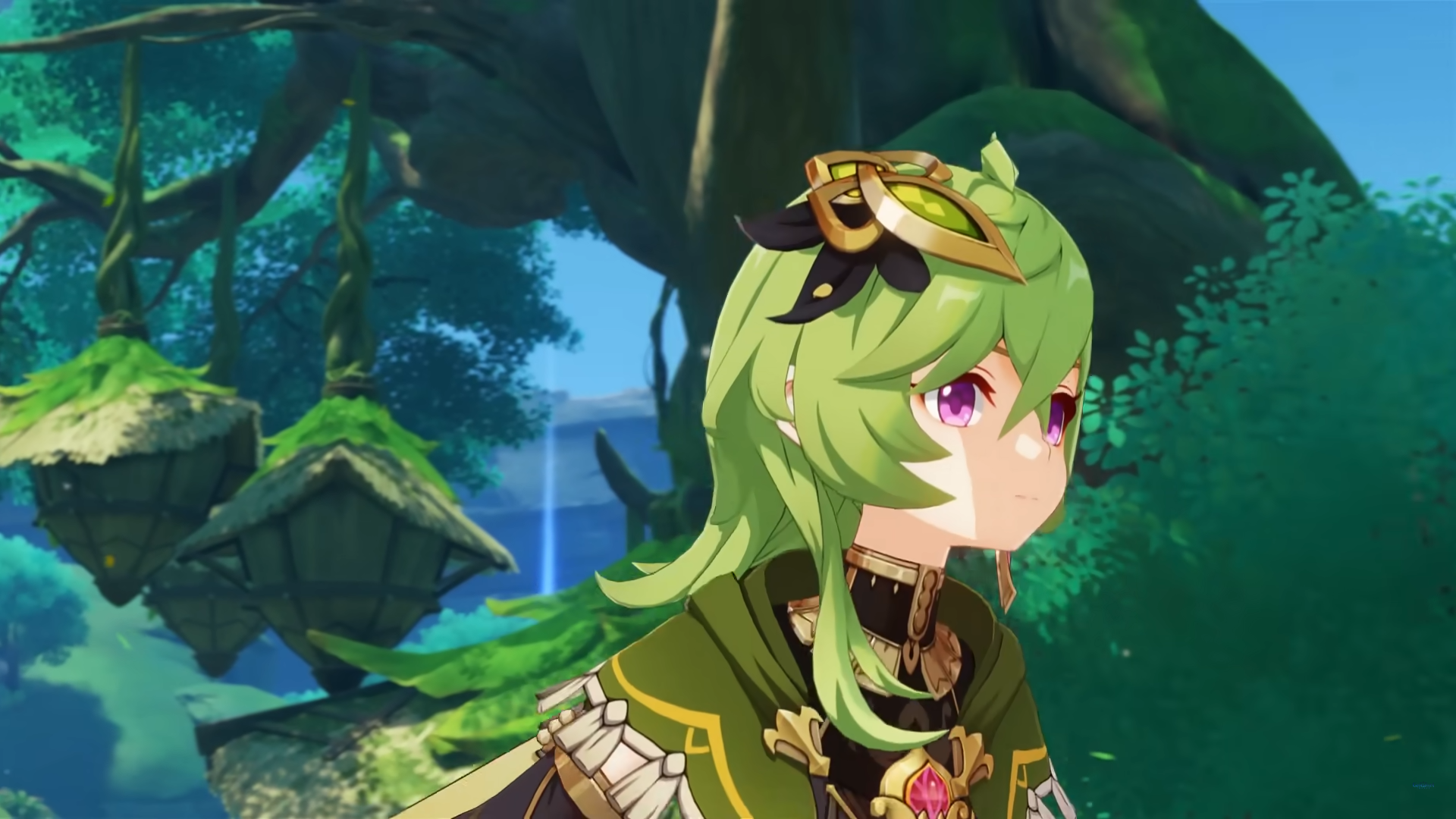 Collei is One of The Few Characters Shown in The Prequel, How Did You Feel About Her Role in The Manga and How The Character Has Grown?: I felt really sad for Collei the entire manga. I am disabled and chronically ill, and I feel like there are a lot of parallels with health being a major issue in the manga, or, I guess, a sort of experimental curse. It was really relatable to see her frustration and where she was coming from. I think that it’s just this place of, I don’t feel well, if you touch me you’re going to die, I can’t make friends. Life is not good.

It’s really nice to see her grow into a character that can interact with people. It is really nice to see the joy that comes from her being able to interact with people for the first time, or that’s at least what it feels like to me. I think that she’s doing a good job trying to be like Amber. Amber was so nice to her no matter what was wrong with her, so I think it’s really cool to see her development. I hope she gets to be happy because her life is hard.

What Are Some Things You Feel You Have in Common With Collei?: I really feel like my connection is where she has Eleazar, and it’s something that is affecting her. She doesn’t want it to hold her back. She still wants to be a forest ranger and be involved with things. I think as someone who has a rare lung disease. I think that’s something I can really relate to. Even when you don’t feel well, you really want to be involved, I think, well, how can I ignore this, or what can I do to make this problem a little bit less so I can keep enjoying life and the world?

I think that’s definitely something I relate to with her. I also went through a very emotional “life is tough I’m going to try to be a badass phase” when I was younger and didn’t like being sick. She was probably more justified than mine she was experimented on. I just didn’t feel well, and I also changed from that.

How Did You Get Into The Mindset to Play Collei?: I found it to be easy because I had gone through a lot of medical trauma. A lot of her character is remembering what happened to her but wanting to move forward. By default, my personality is very similar to Collei’s. I don’t know how much acting I did. Just because even though they are different situations when you’ve gone through something that affected you so deeply, it’s something you remember. It’s a normal human reaction to think about things that are bad. I am also super socially awkward, and so is Collei. She’s trying her best, I’m trying my best, so I feel that it was kind of being in tune with my own personality. 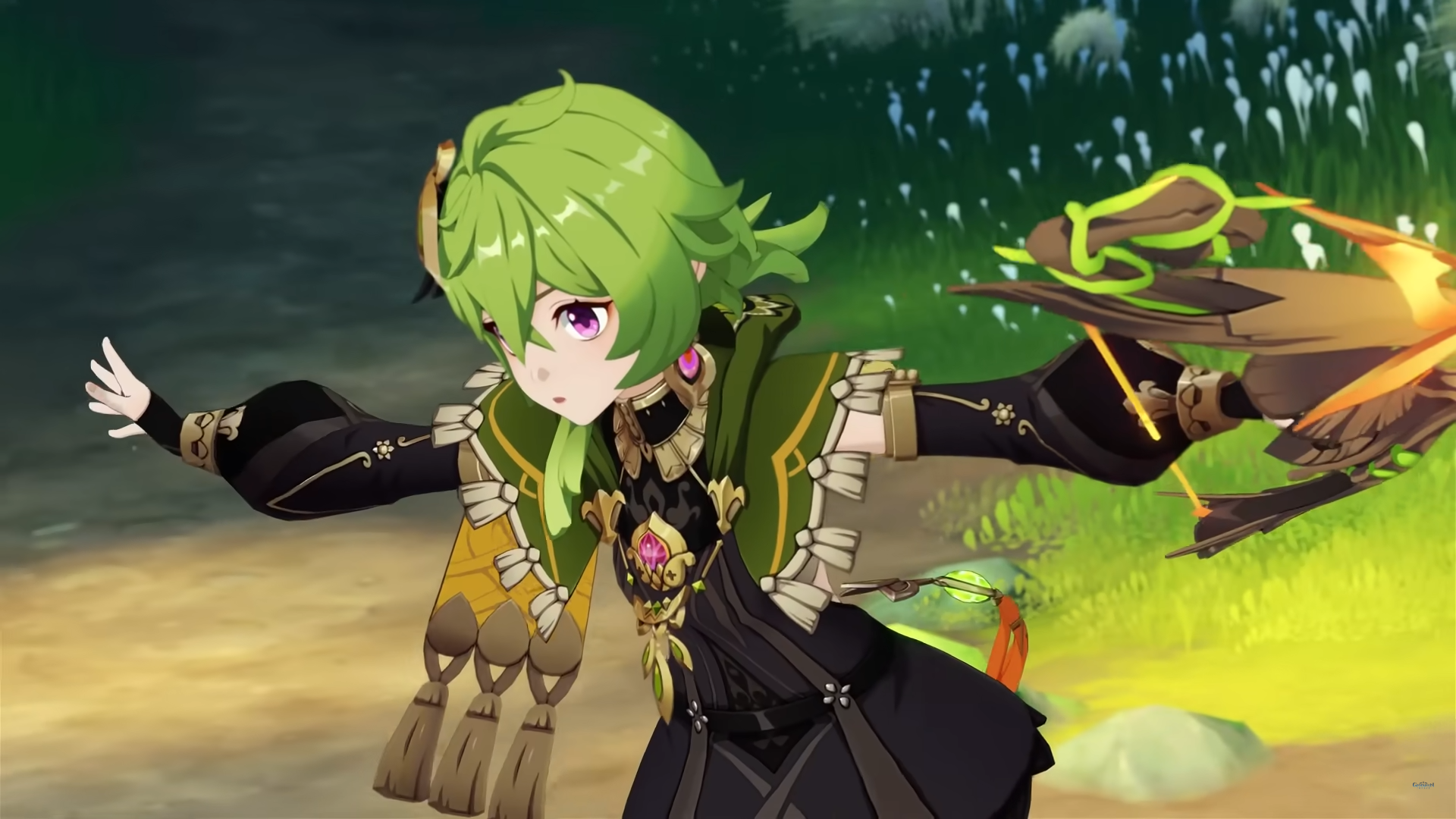 Who is On Your Team, and Do You Have a Favorite Part of The Story?: I am super behind, and I am at the end of Liyue right now. I actually ran to Sumeru to get the mushrooms for Collei and have her on my team. I have Collei and Klee, because she causes chaos. Barbara, to negate the chaos that I’m causing. I also have either Bennett or Keqing, depending on if I want more fire or to not burn everything down. It’s a super chaotic team. I really like the burning reaction, I don’t know why. I think it’s just satisfying. My team is either built around burning or bloom.

Storywise, I really liked Venti’s character arc. I think it’s because he was also in the Manga, and I was attached to him. It was really cool to see what he had been up to. It’s cool to see him be forced to take more action instead of just watching his people I really like Mondstadt, even though it’s a generic anwser.

Would You Like to See a Collei and Amber Reunion?: I wish their character interactions in the manga are so darn cute. Collei talks about in 3.0 how Amber changed her life and how she is like a warm fire that keeps everyone warm. All I can do is hope.

Is There Any Other Character You Would Have Loved to Voice?: Collei felt like the perfect match. I really relate to her and love her in the manga. It was like a dream come true. I also probably wouldn’t mind being a character like Klee because she’s so chaotic. I love the little chaotic fire, baby. She brings me a lot of joy. Someone like Bennett would also be really fun. I love voicing young boys because they’re usually so over-the-top personality-wise. Bennett is so excited about everything. I wish I had an ounce of his energy, despite his bad luck.

I would like to be Klee or Bennett, so chaos or chaos, basically. 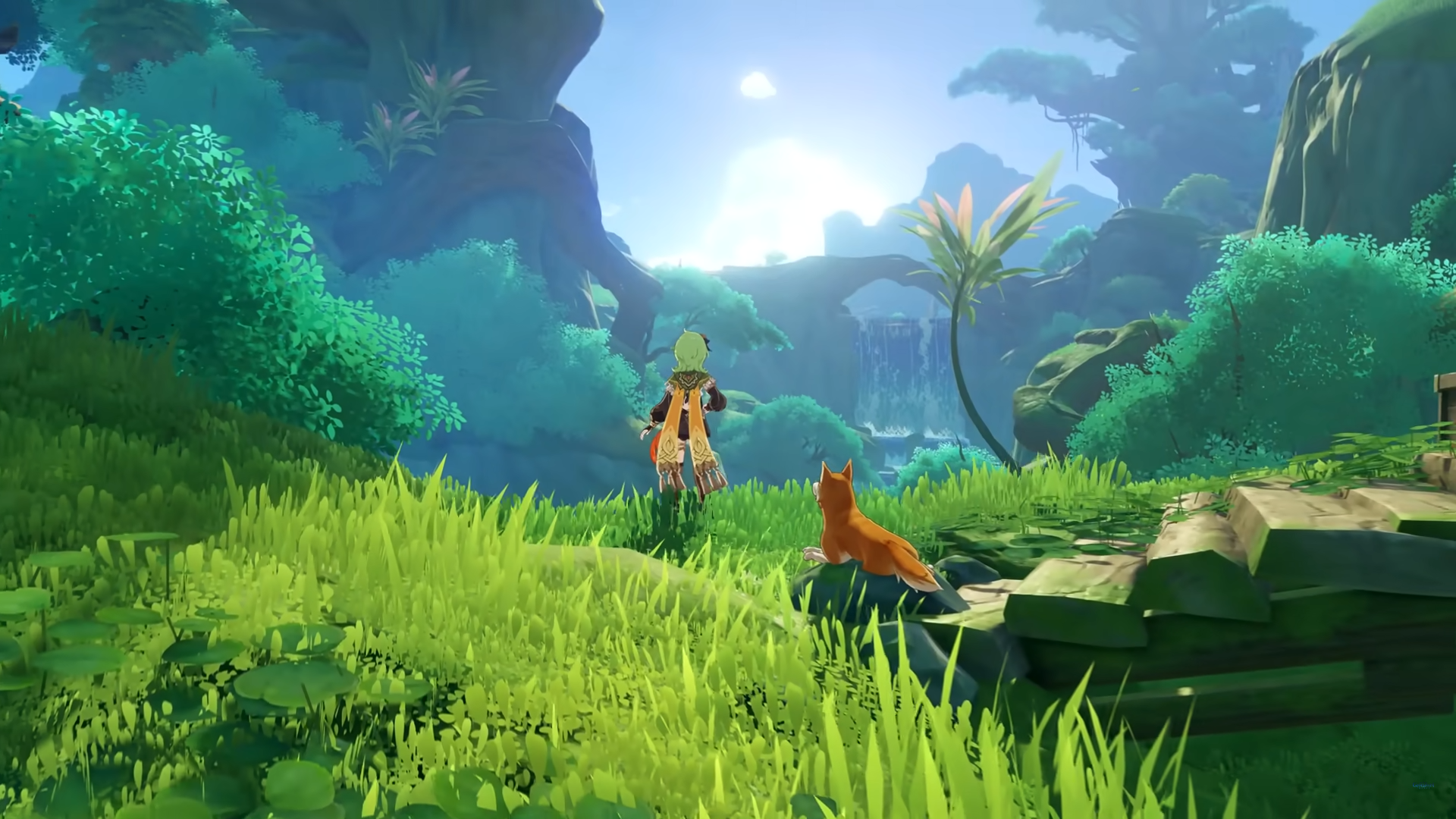 What Are Some Projects We Should Check Out From You?: I was in a fun one, Seirei Gensouki: Spirit Chronicles, on Crunchyroll as a character named Alma. She is very small and has a large hammer which brings me a lot of joy. I was in a couple of indie projects that I think are really cool. One is called Unichrom, a 1-bit Unicorn game where I am an evil unicorn, which is the aesthetic I want for my life. An evil, chaotic unicorn that sounds like Bubbles and Harley Quinn together, arguing at the same time. They are trying to get it on all platforms and are trying to release it in the next few months. It is incredibly chaotic, so if you want chaos, play this game.

I put most of the things that I do on Twitter. Right now, I have the awkward small girl with a giant hammer or a chaotic unicorn. I also am in the dub Henkei Shoujo, where my character transforms into a chef that shucks food at people, so that’s fun. It’s up to you if you want to see me as an evil unicorn, a guy with a giant hammer, or a chef throwing food at people. That’s my career.

A special thanks to Christina Costello for speaking with us. For more about Christina, check out her Twitter or her website.

Related Topics:Genshin Impact
Up Next

Otakon 2022 and the Saga of The Stolen Ms. Hina Standee