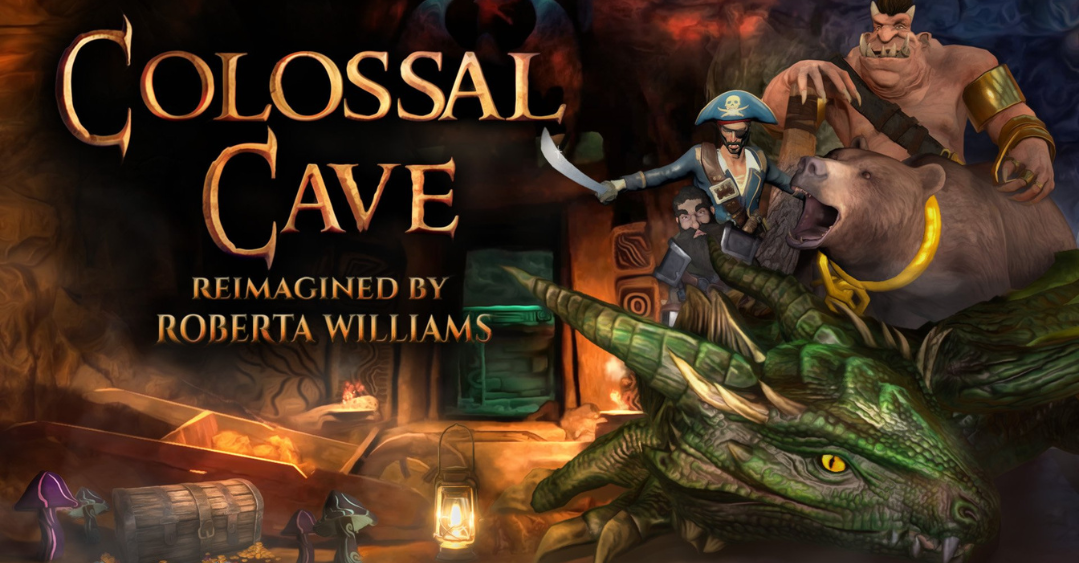 Colossal Cave feels as old as time. Maybe because it first came out when PCs were barely a thing. Dating as far back as 1976, it only took a couple of decades for Roberta Williams to contemplate, “Hey, Colossal Cave could do with a remake.” There are a good number of readers here who may not recall the first game. All you need to know is that it caused a massive stir in the gaming industry. 1976’s Colossal Cave dared to introduce player interaction with games, a concept that today, seems like an everyday thing.

Granted, Colossal Cave only got as far as using text to illustrate concepts and take in commands from players. Fortunately, 2023’s Colossal Cave remake is here to turn the tide on its predecessor. It intends to utilize the full sphere of modern technology and attempt to bring retro gaming back to life. Curious whether the new game achieves what it sets out to do? Tag along for this “good, bad, and ugly” (if any) Colossal Cave review, will you?

What is Colossal Cave?

You may already know the 1976 classic text adventure game by the same name. Or perhaps the 1980s remake that still causes a stir in gaming. But if you don’t, 2023’s Colossal Cave is yet another attempt at reincarnating the titular Colossal Cave with its meandering mazes and caverns that serve as obstacles to your progress. Along with physical barriers, Colossal Cave features enemies like trolls, bears, snakes, dwarves (seven, of course), and pirates that want you dead.

To help you on your quest, text puzzles pop up, hinting toward an item you could collect or where to locate treasures that you must return to a house at the start of the game. Overall, it’s a game that marries discovery, puzzles, and randomness into one fulfilling adventure.

Out with the Old… 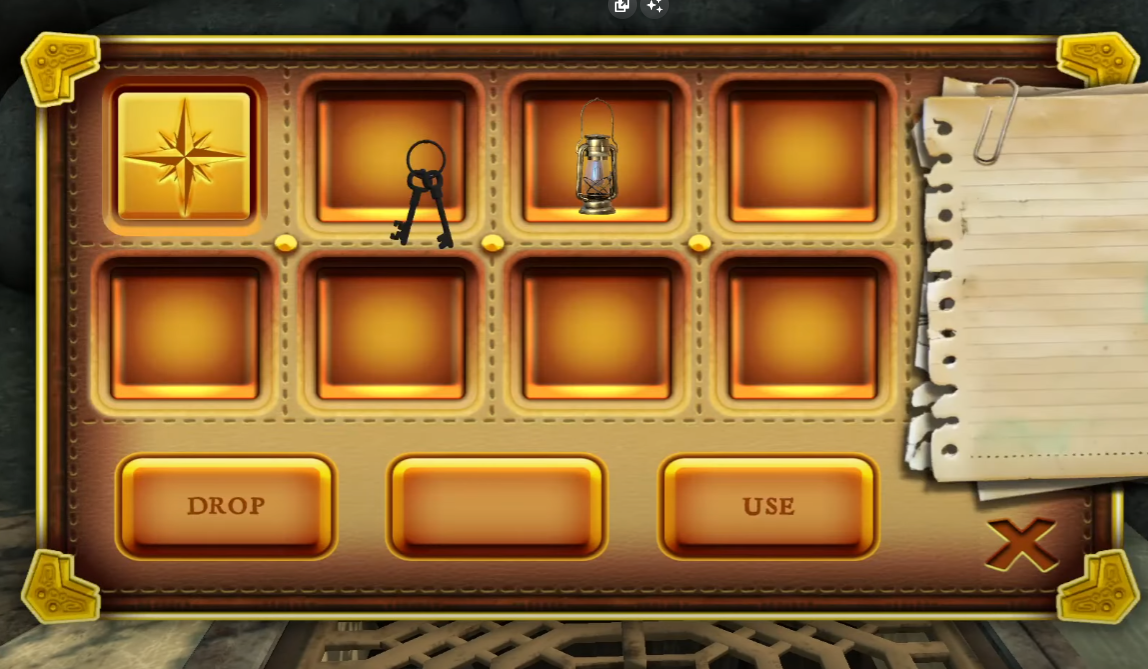 Attempting to remake an old-school classic can go either way. On one hand, gamers have outgrown the old. So many years have passed that have each catapulted gaming to new heights. Sure. You may reminisce about the old days, but it’s pretty debatable whether anyone would want to spend more than a few hours on a text-based adventure game from 1976.

Fortunately, Colossal Cave introduces up-to-date graphics to the remake. Now, that’s interesting; a graphic adventure game is the “it” thing these days. Colossal Cave is now a fully three-dimensional game. The text from before is now transformed into something you can actually see (rather than visualize).

However, let’s not kid ourselves that graphics alone will cut it. Especially when there are a ton of games right now with jaw-dropping visuals, you literally feel like you’re transported into a world different from your own. And, in that regard, Colossal Cave falls short. The graphics, though in 3D, just don’t feel at par with what today’s gaming hardware is capable of. It’s lackluster, with the low budget allocated toward the remake evidently bursting at the seams. 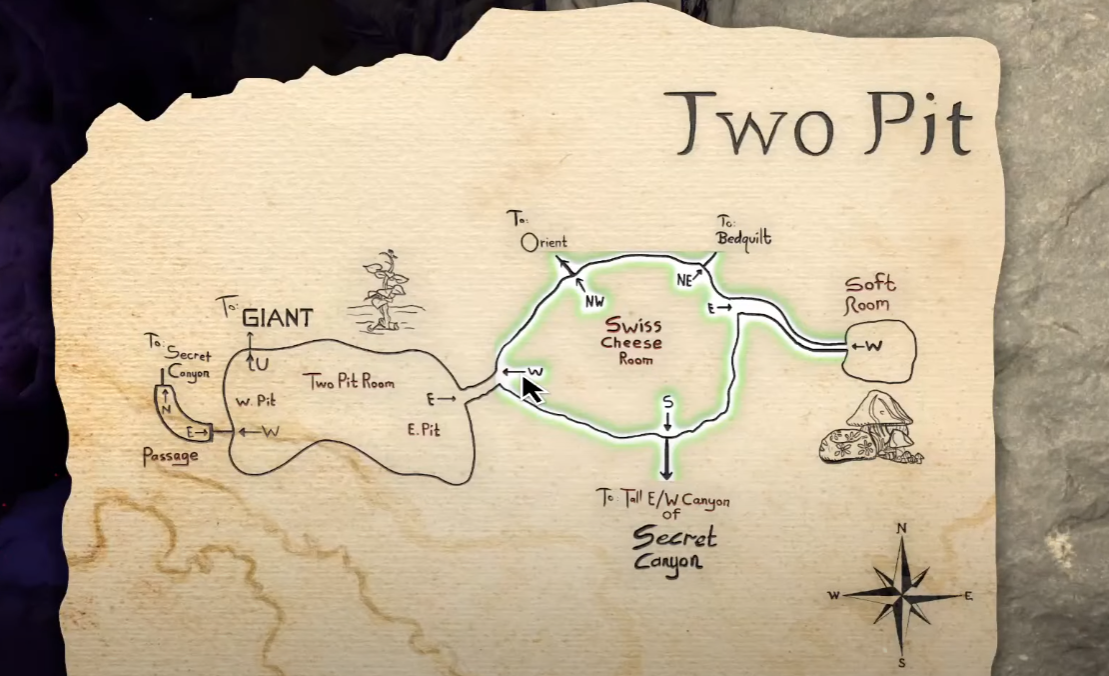 It gets worse. The only alteration the remake receives is the rendering of the original text into graphics. Otherwise, all other aspects of the original gameplay remain exactly the same.

In retrospect, the original text adventure game was so inviting and creative. So, perhaps, it makes sense to still want to have it read exactly the same by an optional narrator. However, 2023’s Colossal Cave now seems to over-rely on the original’s success.

With the only major difference being the transformation of text into graphics, it’s quite disappointing when the new environment feels difficult to navigate. It feels like you have to rely on the narration to locate certain objects or at least get a hint of where they might be.

Otherwise, merely using the visuals will get you nowhere. The visuals aren’t helpful, the background details are inaccurate, and the overall environment is nowhere near pleasing to the eye.

Word for Word, Play for Play 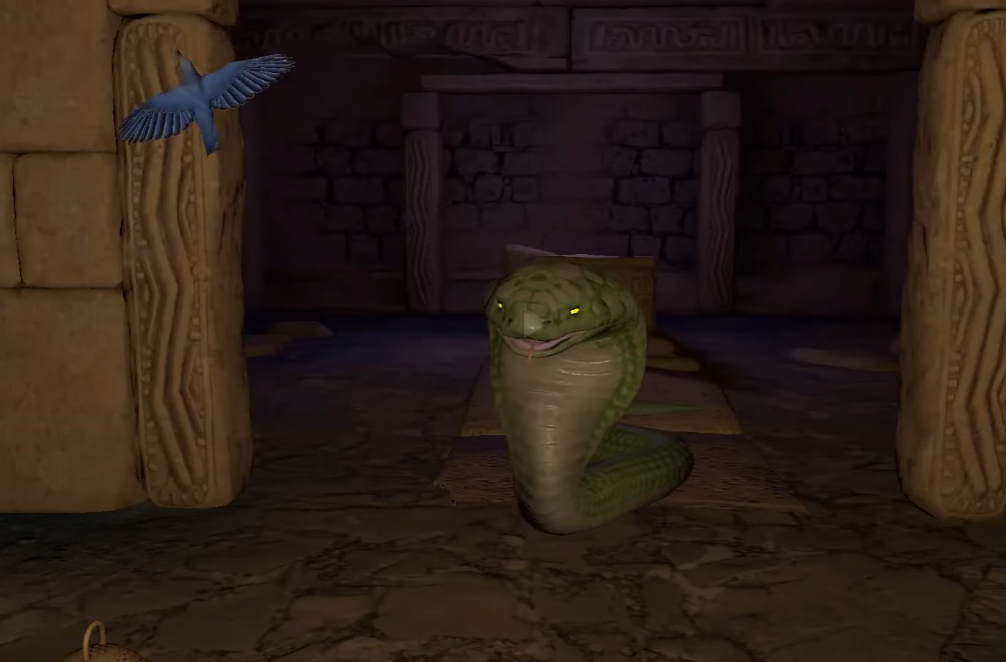 In the original, gameplay aspects like instant death and mazes-that-lead-nowhere were commonplace. This is to be expected, especially since old-school gaming was notorious for it. But times have changed.

Unless it’s a Souls-like game, in which even Souls-like games have a way out of puzzling mazes and difficult boss fights, elements like instant death and mazes-that-lead-nowhere should just be a thing of the past. Unfortunately, Colossal Cave fails to iron out some of this annoying, outdated gameplay.

You’ll find dwarves jumping out of the ground without warning and killing you. Or, frustrating mazes that, oddly enough, were pointed out by fans before the remake was made.

If it Works, it Works 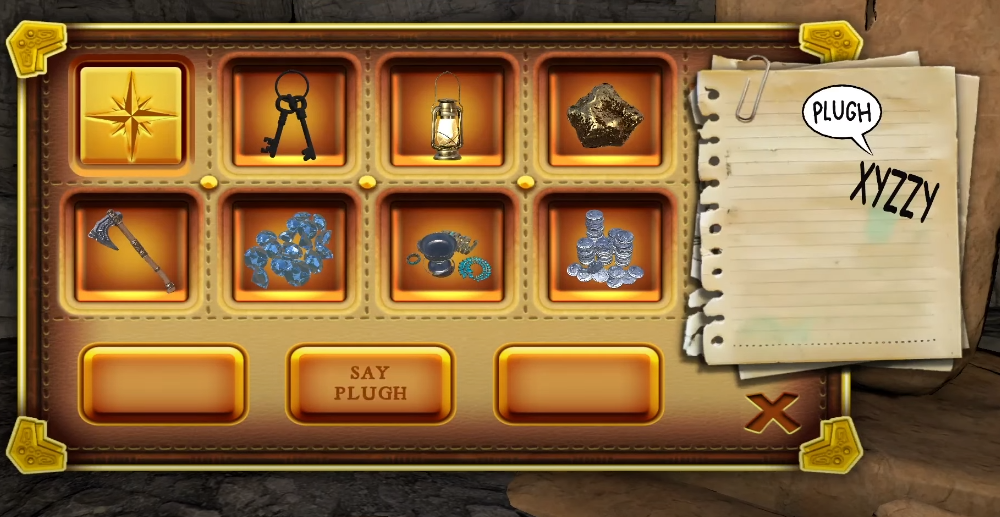 I’m not, in any way, advocating for remakes to deconstruct their predecessors and create something entirely new. Hey, if it works, it works. This is especially true for the original puzzler, which quickly rose to prominence as a key influencer in the puzzle games we know today.

Most of all, Colossal Cave masters the art of wordplay. It’s not just an instructional guide about where to go and what to do. Instead, the gameplay infuses emotion and thought into solving the puzzles, thus keeping you engaged throughout the playthrough. A neat aspect of the original is randomness and deception, case in point is the frustatingly instant death gameplay that is, in no way, your fault, but oh well.

Though let’s not forget, Colossal Cave’s recipe comes from a years-gone-by experience. It’s nothing new. Nothing we haven’t already seen. Consequently, Colossal Cave becomes its own worst enemy, with the remake struggling to find its place in 2023.

Way Down We Go 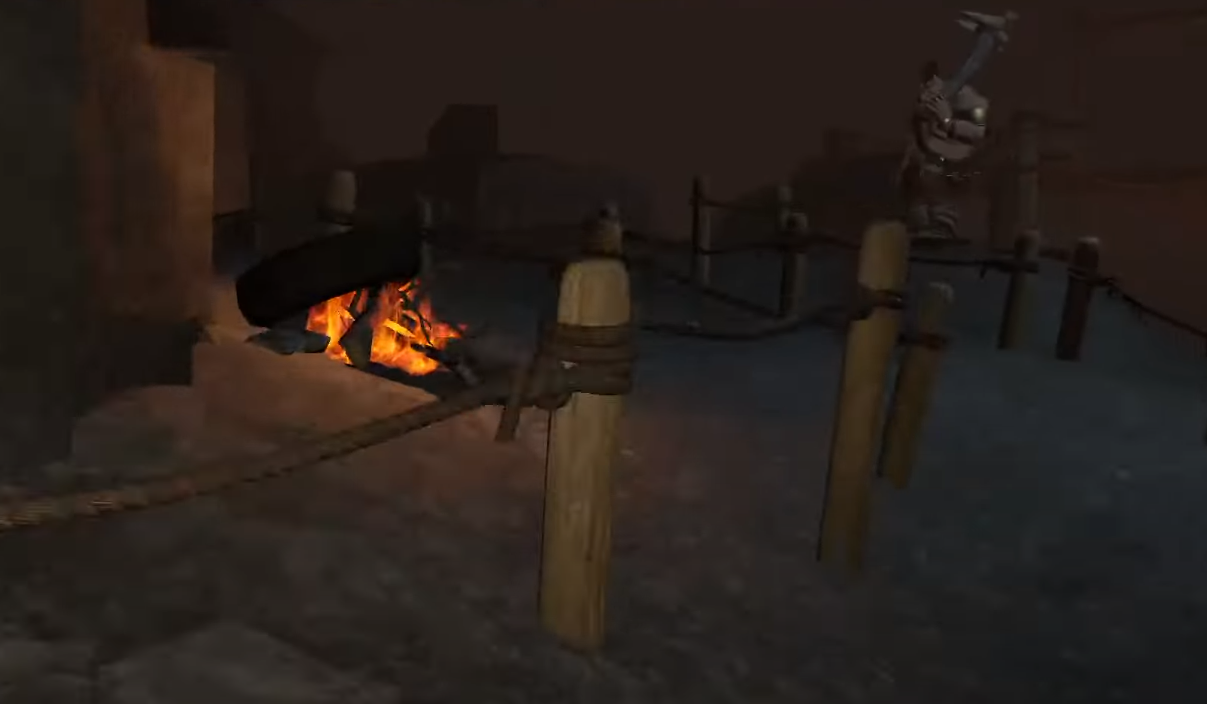 I feel that if there was more to mull over in the new game, it would have been easier to be forgiving of thwarting the graphics. But there’s more copy-paste gameplay that might just be a far worse thing to do in today’s age than lowballing the graphics. On the other hand, Roberta Williams made Colossal Cave 3D with the intent of catering to a specific crowd of gamers.

So, if you’re curious about the past, you’ll be happy to know Colossal Cave looks, feels, and plays old. It’s exactly the way to find out what puzzle adventures are like. It could be fun for some players to dive deep-dive into the prehistoric origins of puzzle adventure games. You even experience old-school gameplay elements like getting trapped somewhere with no explanation of how to get out of it. At the end of the day, what works is simply trying and trying again.

Plus, you could also find pleasure in researching Roberta William’s career journey, seeing as she was a famous developer making games like Sierra On-Line back in the 80s. 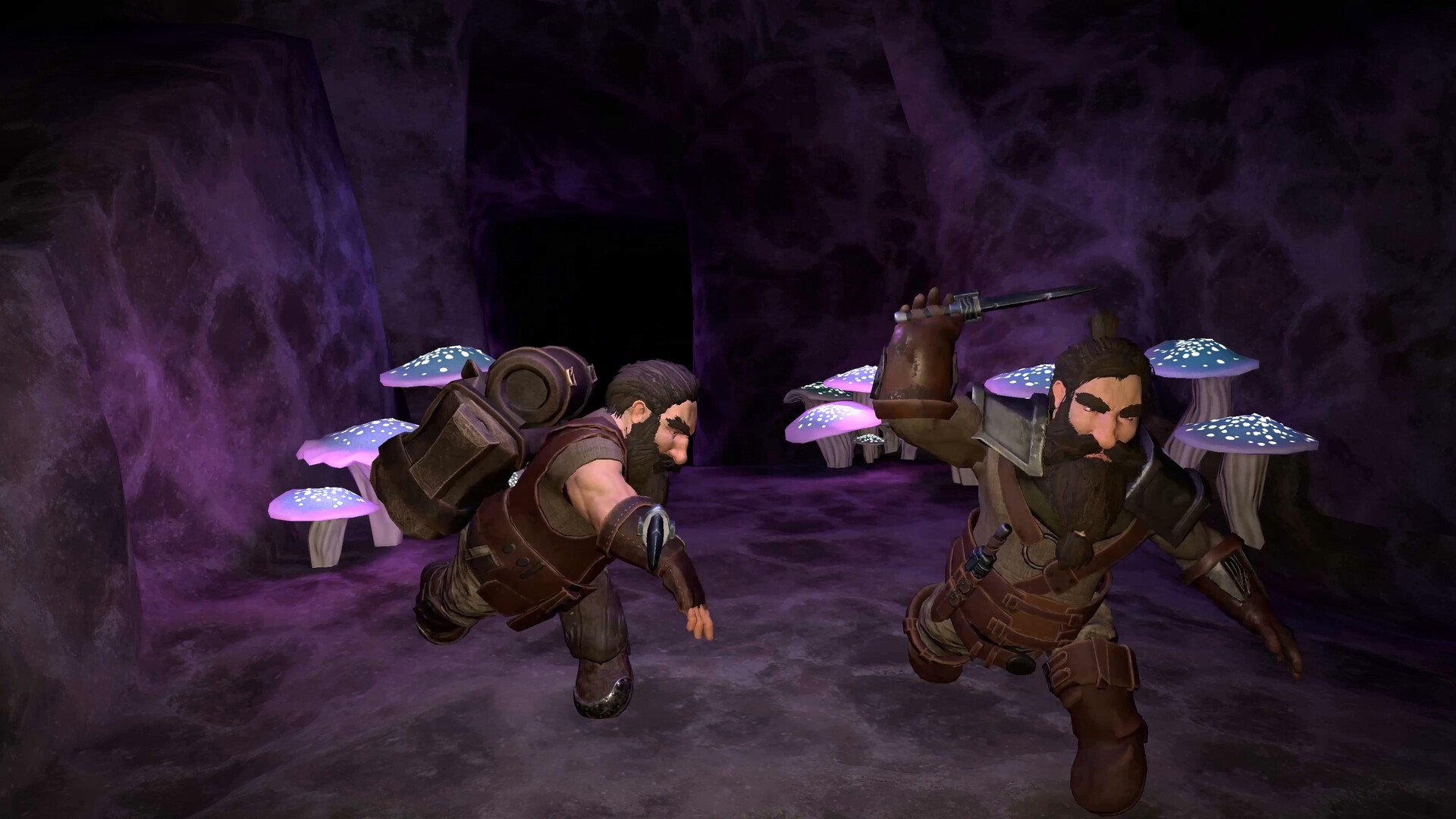 It’s no secret that Colossal Cave is a spectacular game. Simply by stemming from a classic text adventure, Colossal Cave becomes a worthwhile game to check out. However, the retro versus modern gaming debate often always ends in one way, that retro gaming is a great contender, true, but solely focused in its time.

So many years have passed since then, and technology has reached such great heights that it’s hard to sit through a game that doesn’t fully take advantage of the hardware capabilities of today. In that regard, Colossal Cave remains a great remake solely based on its predecessor’s success.

The narration is very inviting and creative. It features not only randomness but deception too. Several twists and turns show up, both literally and figuratively. Overall, it’s an in-depth puzzle adventure that goes beyond mere instructional gameplay.

However, while Colossal Cave’s gameplay innovation works in its favor, it’s also the cause of its underperformance. Randomly generated mazes are a spice of fun. But it also means running into several mazes that lead nowhere. Plus, dwarfs coming out of random areas and throwing a knife at you means instant death and aggressive gameplay that could be unjustified for some.

This is a tough one. Some will find it charming that the new game references one of the first and most successful text adventure games of all time. It’s definitely exciting to see the once-all-text narration fully rendered in 3D caves around you. However, the graphics are nowhere near modern standards.

When comparing the original to the remake, the effort put into developing either one just doesn’t match up. So, as a standalone entry, does Colossal Cave really compare to any of today’s top adventure releases? No, not even close. But as a way to reminisce about the past? Yes, very much so.

A Classic Adventure, Re-Imagined from the 1970s

I’ll break the ice and go straight to saying Colossal Cave isn’t nearly what you can expect in 2023. Rather, it’s a classic adventure re-imagined from a 1976 all-time pacesetter of the genre. It was the developer’s intention to invoke nostalgia, above all. So, the graphics will feel dated. The gameplay will feel exactly the same as in 1976’s Colossal Cave. Even some of the issues you may have experienced, like instant death and mazes-that-lead-nowhere will pop up in the remake. That’s not to say the remake is utterly useless, no. Colossal Cave 3D serves as a nostalgic reminder of how far puzzle adventures have come. And the reason why the remake feels, looks, and plays old is that it’s exactly what the developer set out to do.