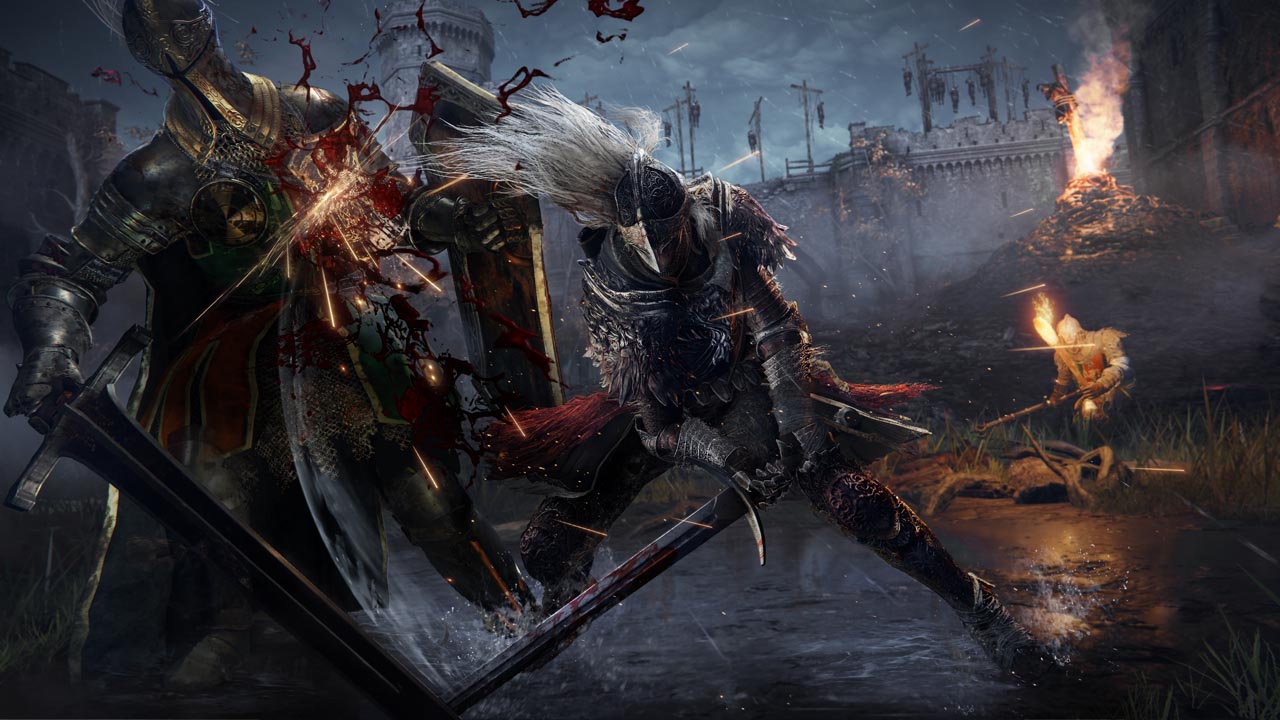 Not to rely on wishful thinking or anything, but surely we can’t be the only ones who think that boss fights in Elden Ring remain at the exact same difficulty throughout, right? They don’t, by the way. In fact, they gradually spiral into behemoth-sized monsters that can whittle your health bar down faster than you can reach for your sword. And the only way you can really counter this, of course, is to, you know, get better. Oh, and invest in some quality swords that will make your life a little less infuriating.

So, how exactly do you get a leg up on the competition in a game like Elden Ring? Well, for starters, it isn’t an easy journey, nor is it exactly littered with rainbow roads and candy-covered paving slabs with little to no hurdles whatsoever. Power through, though, and you’ll eventually grasp some of the best weapons to ever grace the Lands Between, which will also give you all the right tools to level the playing field and nudge you closer to attaining that all-powerful Elden Lord status. 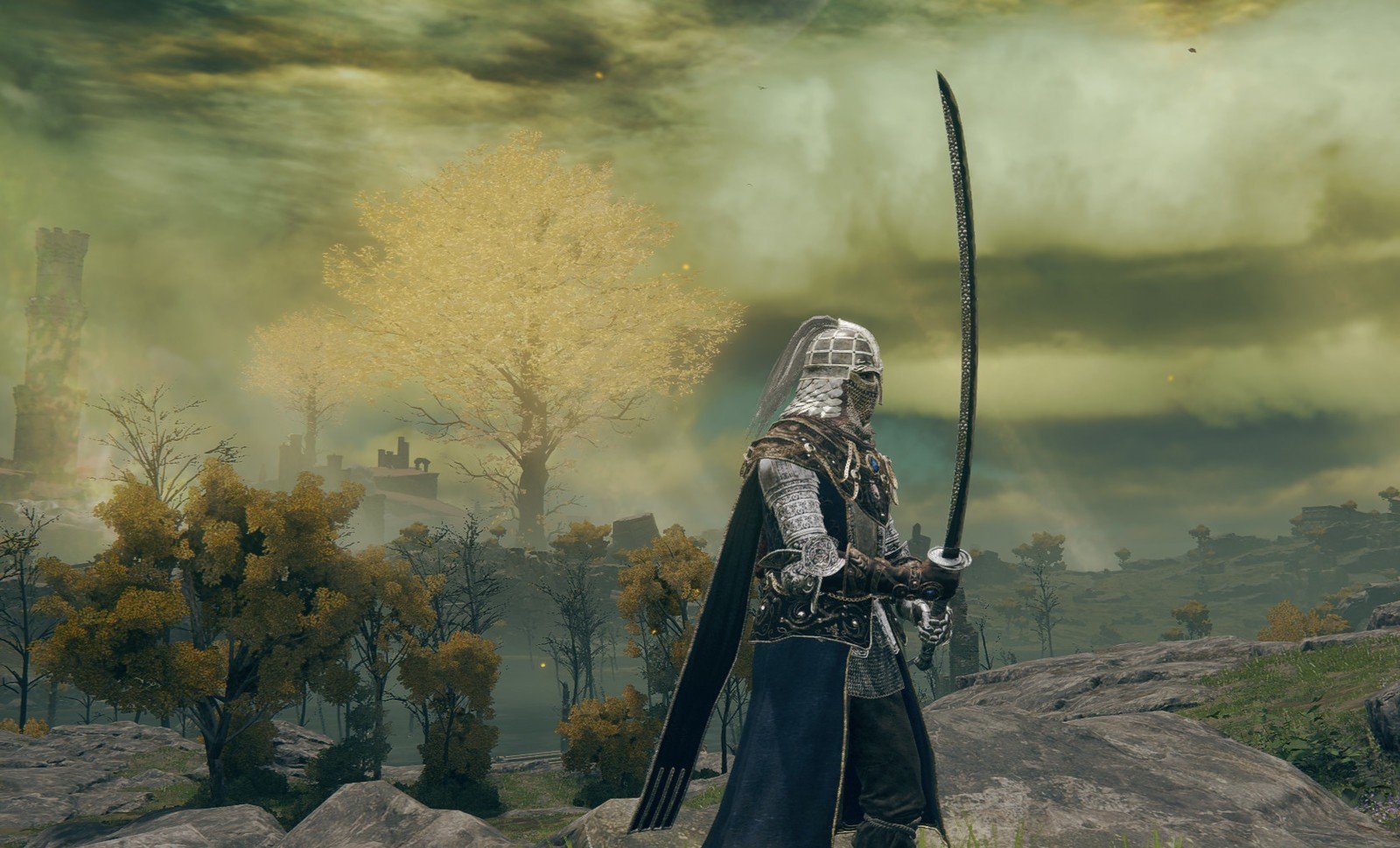 An excellent alternative to the Wing of Astel blade would perhaps be Moonveil, a katana-like weapon that not only provides a well-balanced selection of ranged attacks, but a fully functioning unique skill that bears the potential to slice through enemies without onboarding any unwanted damage. It’s a perfect all-rounder, and most definitely a solid choice for those looking to apply hard-hitting bleed damage to their loadout, for sure.

You can get your hands on Moonveil by defeating the Magma Wyrm in the Gael Tunnel. You can reach this dungeon by venturing to the border between Limgrave and the Caelid Wilds. 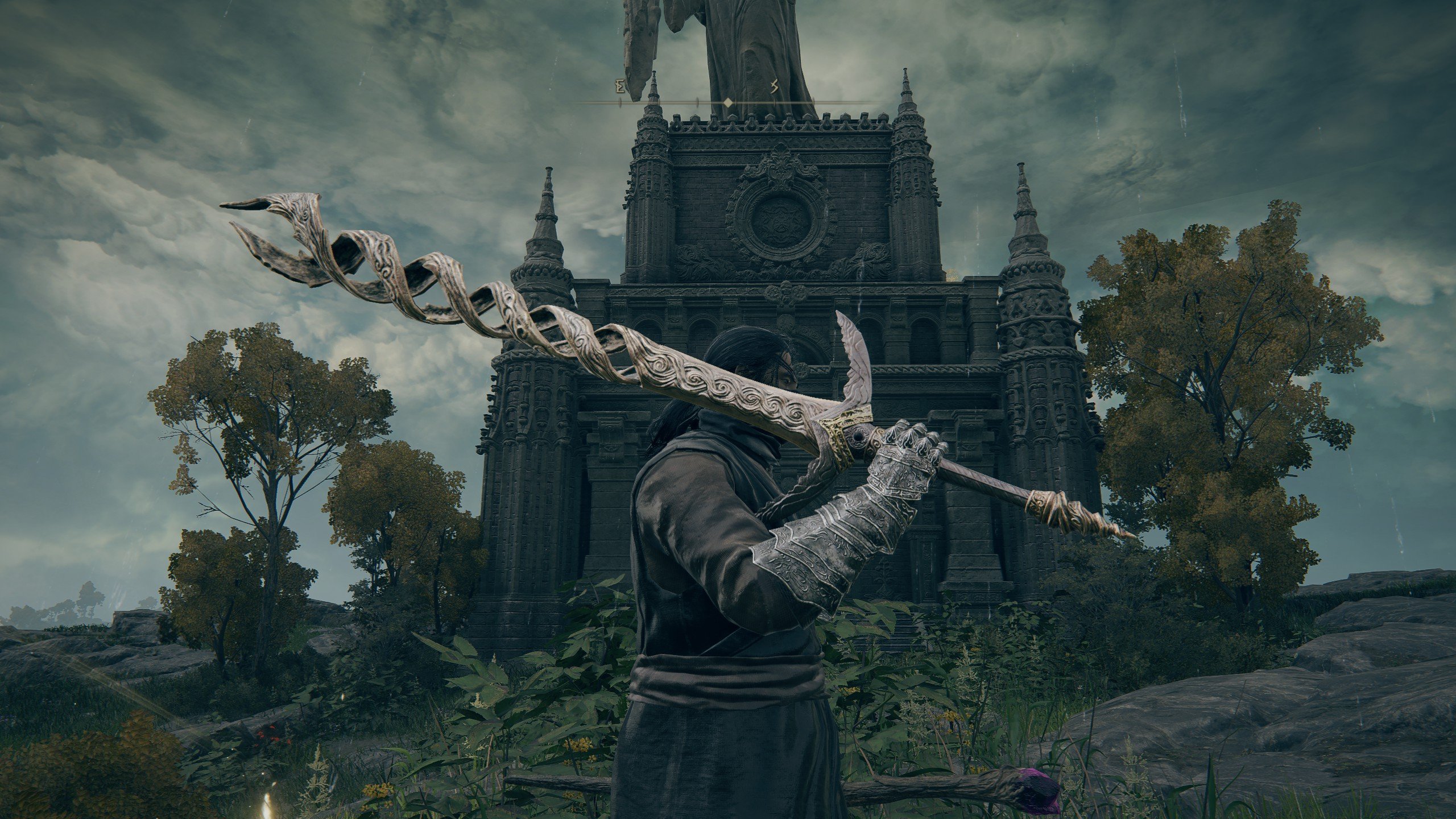 Godslayer’s Greatsword is an ideal substitute for any mixed to mediocre fire-based greatswords. A Collosal sword in itself, the epic relic scales primarily with faith and dexterity, and boasts an all-round solid damage output. The only downside to Godslayer’s Greatsword is that, well, it isn’t all that easy to obtain. It is, however, well worth the trouble—especially if you’re only partway through the game and in need dire need of a fantastic weapon to see you through the tougher tides.

In order to reap the benefits of the Colossal sword, you will first need to defeat Godskin Apostle in The Divine Tower of Caelid, which can be found in Dragonbarrow. Once bested, you will find the weapon in a chest behind the boss arena. 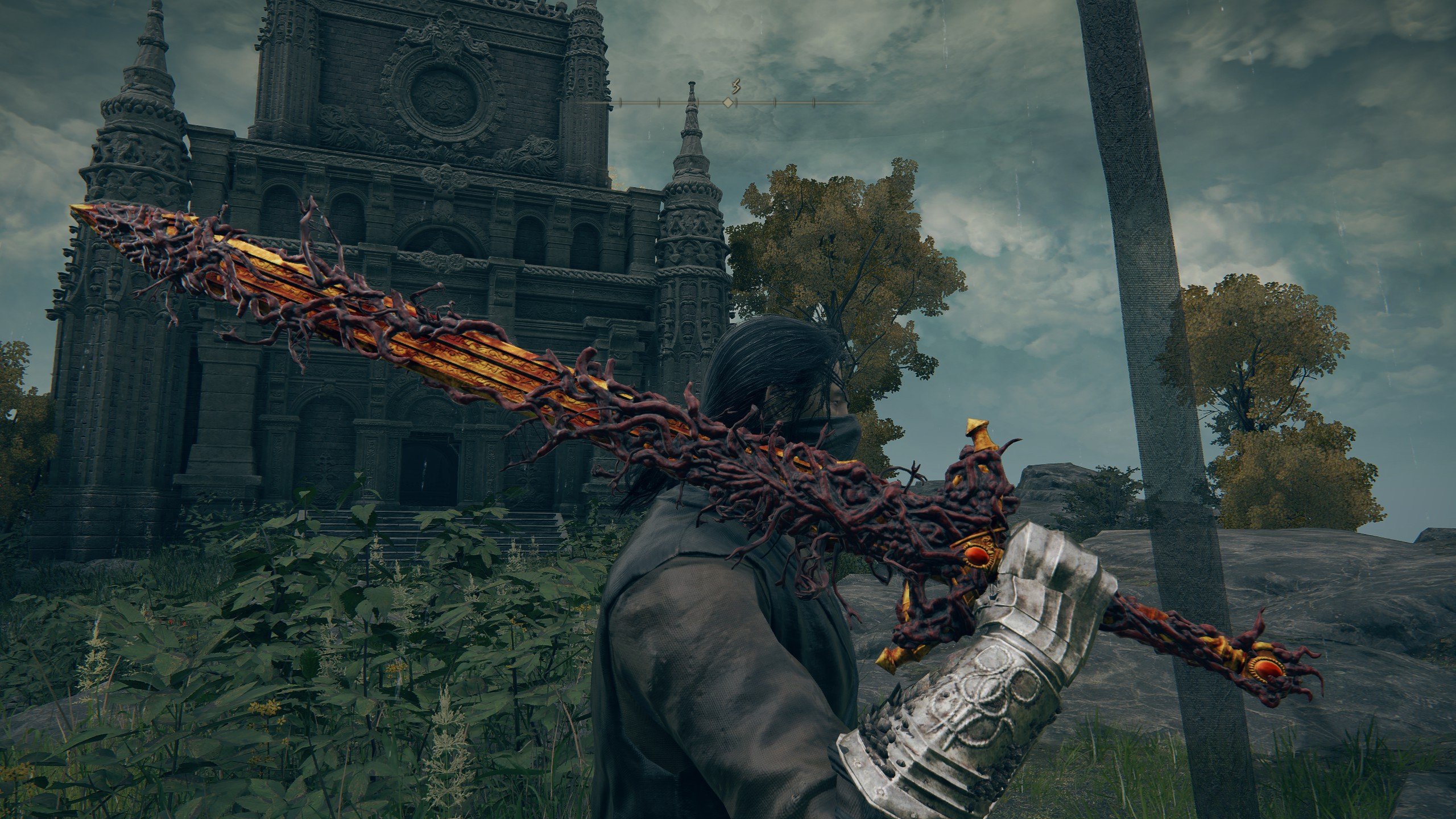 There isn’t a more stylish and elegant sword in all of the Lands Between than the legendary Blasphemous Blade. Thanks to its ability to carve up fire damage with each and every attack, it immediately becomes one of the few greatswords in all of Elden Ring to make life out in the Lands Between slightly less rage-inducing. Oh, and not to mention that it also comes preloaded with the Taker’s Flame skill, a fire-based attack that sends waves of volcanic ash at nearby enemies and consumes their HP. There’s that, too.

To acquire the near-perfect Blasphemous Blade, you will need to defeat Lord Rykard, Lord of the Volcano Manor in Mt Gelmir. After you’ve successfully bested the deadly foe, take the Remembrance of the Blasphemous back to Enia at the Roundtable Hold to collect your reward. 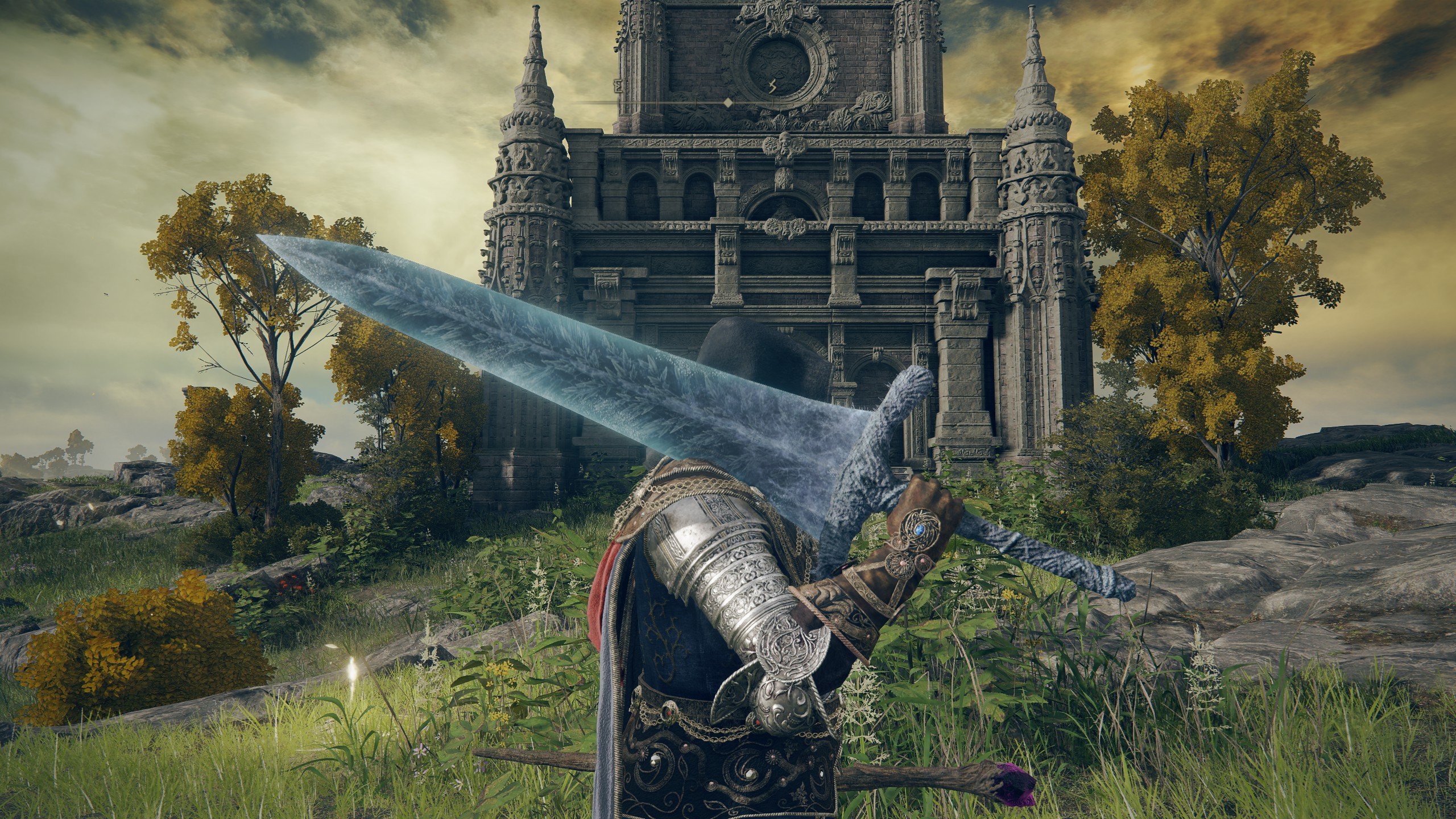 If you’re one for keeping in line with a tight pattern, then you’ll definitely want to get your hands on the Dark Moon Greatsword, a spiritual successor to the legendary Dark Souls’ weapon. Similar in style, the unique relic bears the power to inflict massive frostbite damage in waves upon waves. The only downside is, well, you’ll need to have a rather high Intelligence level to wield it. 38, to be precise.

To bag the Dark Moon Greatsword and reap the benefits that tie in with the Moonlight Greatsword skill, you will need to complete Ranni’s thread of side quests. Once completed, head on to the Moonlight Alter, and then through to the Cathedral of Manus Celes to obtain the weapon. 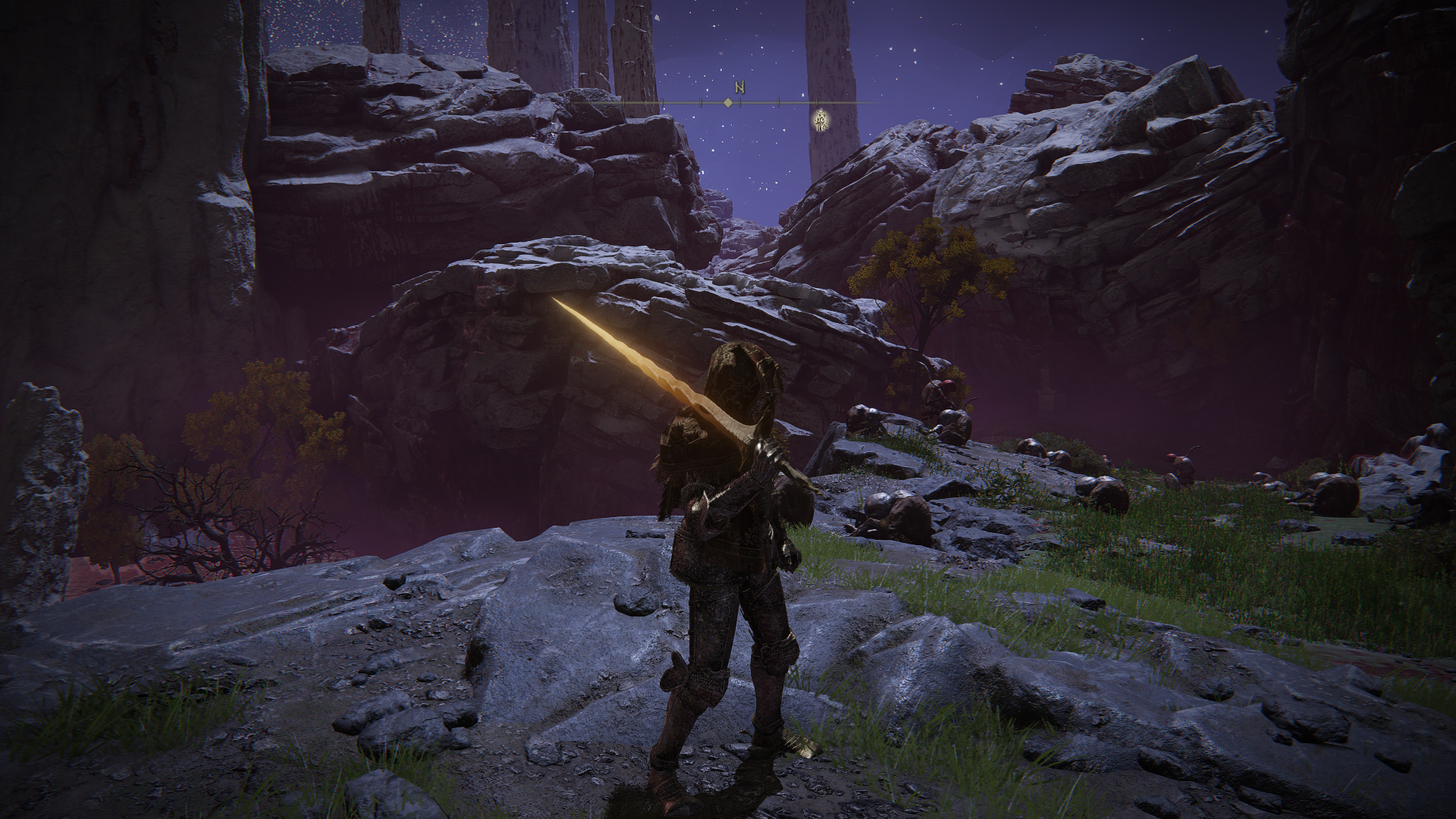 If you’ve looking for a quality incentive to keep you trucking on through Elden Ring and its countless trials and tribulations, then consider the Sacred Relic Sword, a unique relic that can only be earned by mopping up the final quest and defeating the Elden Beast. Once the notorious Best has punched its ticket, speak with Enia at the Roundtable Hold, and then trade in your Elden Remembrance.

So, is it worth the trouble? Well, to put it short — yes, yes it is. The part that gives it the platinum status, though, is its unique skill, Wave of Gold, a powerful magic-infused attack that fans out an entire golden wave and slices through any nearby enemies. Add the fact that it also goes hard on additional critical and Holy damage, and you’ve got yourself one of the most powerful Greatsword in all of Elden Ring, clear as day.

So, what’s your take? Do you agree with our top five swords? Are there any weapons in Elden Ring you’d recommend to a newcomer? Let us know over on our socials here or down in the comments below.