If you’ve been playing Grounded since its early alpha, you’ll know that it’s an exciting time for the game now that it’s been fully released. A lot, and we mean a lot, of new content came with that. Some of the best came for the weapons, with 12 new ones added to the game. We even saw the addition of staffs for those who are serious about their magic. However, now that the offensive meta has been jumbled, we’d like to look at the five best weapons for squashing bugs in Grounded.

As you may be aware, certain weapons and their effects are best suited to specific enemy types, such as Ants or Spiders. However, we want to look at the weapons we can call Ol’ Reliable for whatever nest, or hole we have to crawl our way into. And, as we see it, these five weapons in Grounded have us best-equipped for every situation. However, obtaining the best tier three weapons in the game is not an easy feat. You will most likely take a beating and sacrifice some blood if you want to start dealing it back. So, let’s see which weapons are worth paying the price for.

5. Scythe of the Blossoms 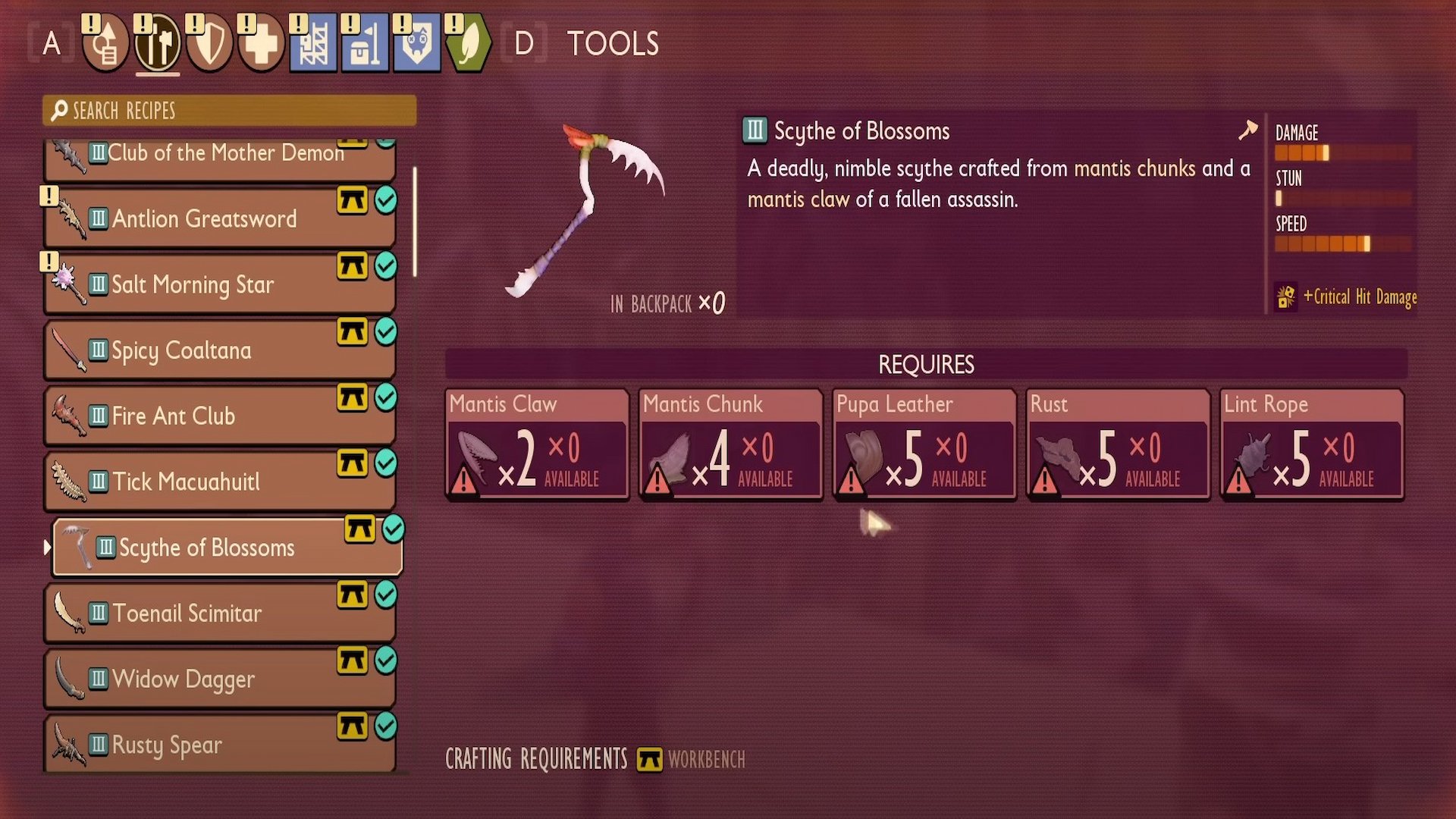 In most cases, you’ll find rocking one-handed weapons with a shield is the most effective in combat. However, that’s not to say two-handed weapons aren’t just as powerful, it’s just their speed that usually lacks. The Scythe of Blossoms, on the other hand, has a basic damage output of 4.5 but a speed of 7.5, which is equivalent to most one-handed weapons. What truly makes this two-handed weapon stand out is its critical hit damage. This can be combined with critical bonuses from armor, allowing this weapon to chunk off even more of an enemy’s health.

Evidently, that’s why the Scythe of Blossoms is one of the best weapons in Grounded, but it’s not so easily obtained. If you to wield it, you’ll need to take on the Orchid Mantis, which is a late-game boss fight, and with that, one of the toughest in the game. So it will most likely take you a handful of tries before you’ve cooked up a winning strategy against the giant Mantis. However, it’s all the more worth it once you can start slicing and dicing with the Scythe of Blossoms. 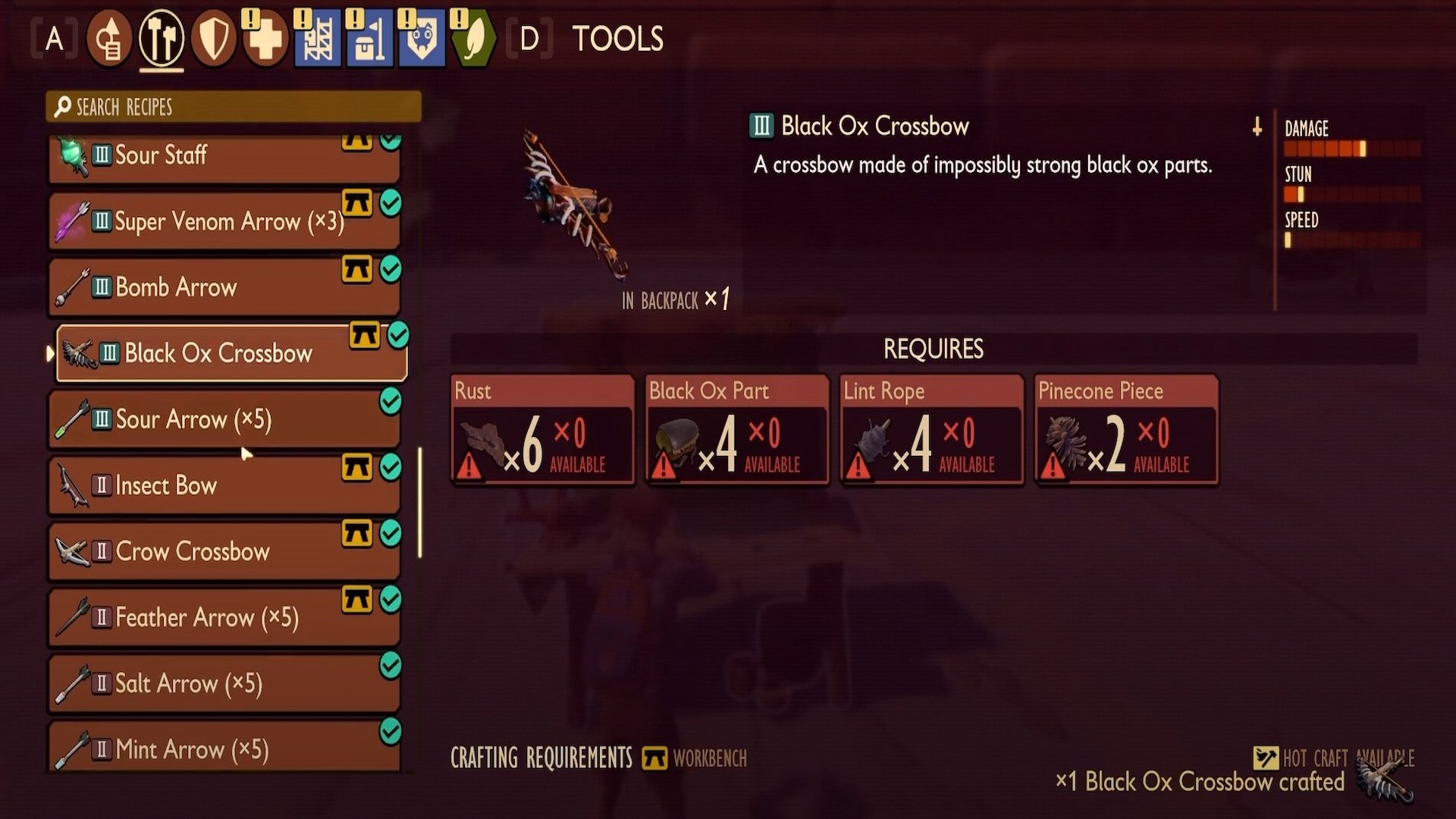 Ranged weapons have bailed us out on more than one occasion in Grounded. That’s why they shouldn’t be forgotten about because they’re perfect at giving you that final finish blow. And while we did get a few new ranged weapons with Grounded’s full release, including the editions of staffs, we didn’t get a tier three bow. Instead, we got a new tier three crossbow, called the Black Ox Crossbow. If you’re the marksmen of the group, this is the weapon you’ll want in your hands.

You get its parts by killing the Black Ox Beetle. Whose still a worthy battle, but nothing compared to others such as the Orchid Mantis. Regardless, the Black Ox Crossbow is the best-ranged weapon in Grounded because it deals the most damage of any ranged weapon, with a damage rating of six. Essentially, that’s why it’s the perfect choice for landing those final killing blows. But you won’t want to miss your shots with this weapon, as its reload time is its downfall. 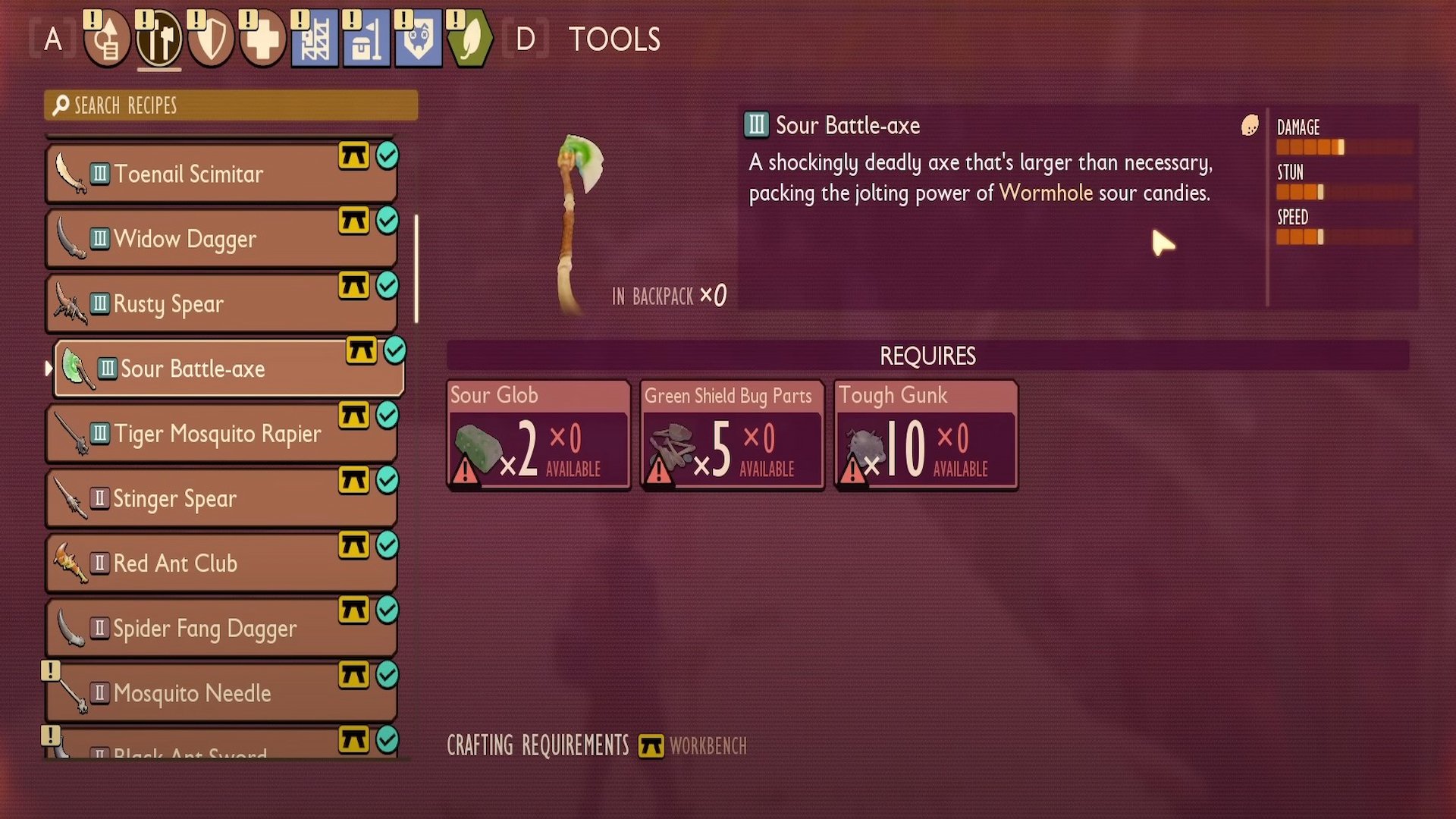 The Sour Battle-Axe is another new two-handed weapon added with Grounded’s full release. And it’s not only one of the best weapons in the game, but in our opinion, also one of the coolest looking. The axe of the weapon is made out of Wormhole sour candies, which also deal out sour damage. Making it great against enemies with little or no sour resistance. However, unlike the Scythe of the Blossoms, the Sour Battle-Axe comes equipped with stun at an output of 3.5.

Combine that stun, with a 3.5 attack speed and five damage output, and you’re looking at a really well-rounded weapon. If you want a weapon that has you equipped for any battle, you can’t go wrong with the Sour Battle-axe. Not to mention it’s one of the more cool weapons to wield and play within the game, with its signature three-hit combo.

The mint mace has been in Grounded for quite some time, and even with the new weapon lineup, it remains one of the best in the game. That’s because of two factors, it’s 5.5 damage output and 6 points for stun. That makes the Mint Mace a really hard-hitting weapon. The falter is its speed, which merely sits at .5, which means you’ll have to learn how to effectively time your attacks. However, with every blow you have a chance at landing a stun, thus granting you another hit.

That’s why the Mint Mace, when used effectively is easily one of the best weapons in Grounded. Needless to say, it packs a punch. Even though you don’t have to kill a life-threatening boss to get it, it’s still not easily acquired. It’s a late-game weapon, which means getting the resources to build it is a lengthy process. However, it’s well worth the payoff once you take it into battle and can truly see its might in action.

1. Club of the Mother Demon 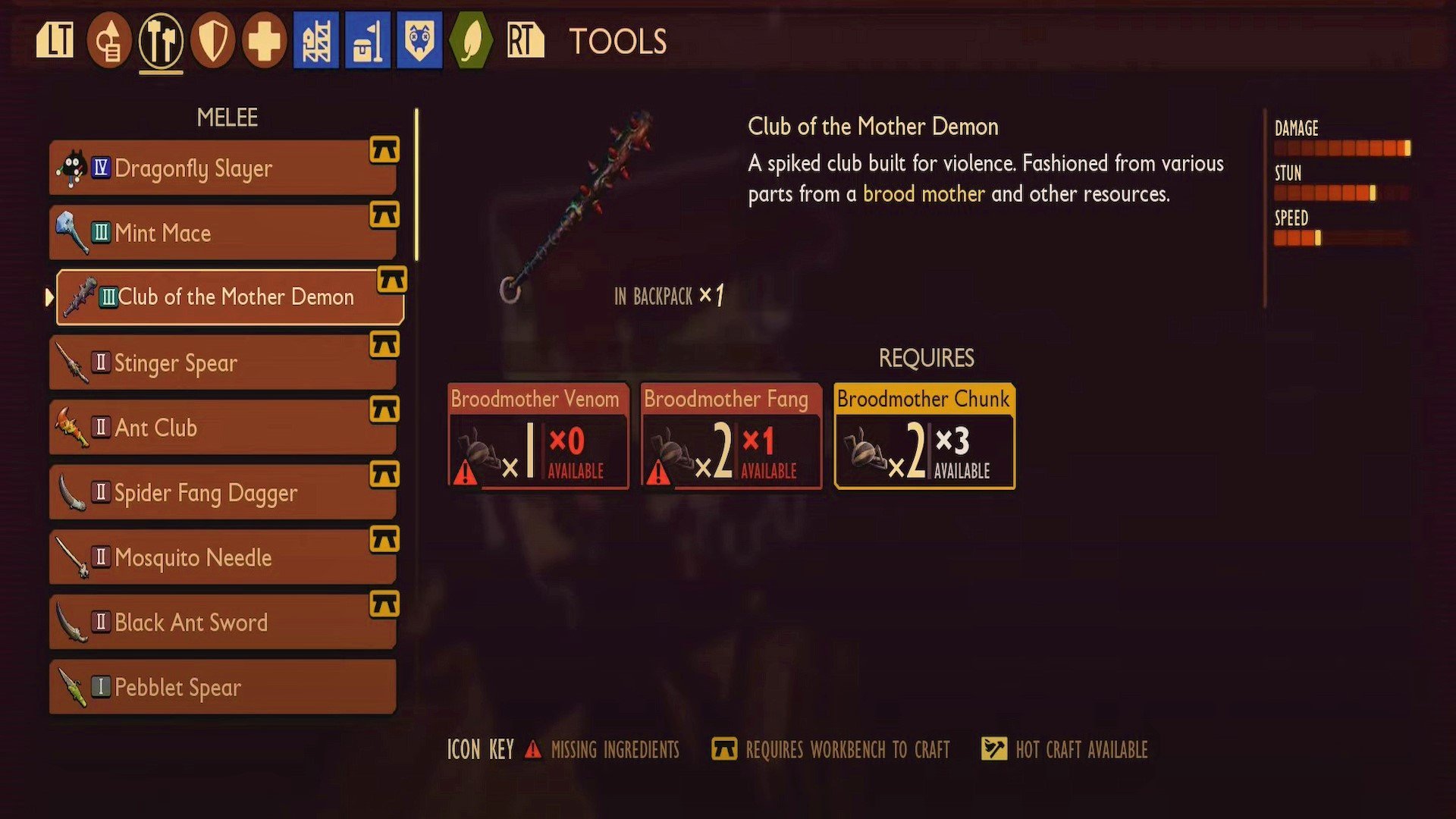 If you’ve been playing Grounded for some time, you’ll know the Club of the Mother Demon is the ultimate insect-killing weapon. It has no special effects granted and to be honest if it had one it would be overpowered. The Club of the Mother Demon it’s just slightly above the Mint Mace, with a starting damage and stun of 6. It lacks in its base speed at .5 but that won’t make a difference as long as you’re landing your blows.

Consequently, being the best weapon in Grounded, it’s also the hardest to get. If you want the parts to make it, you’ll need to kill the Hedge Broodmother. Who’s name is doing justice to just how threatening and intimidating the boss actually is. Without a doubt, this is one of the most challenging boss fights in the game, but you’re fairly rewarded once you’re on the winning side. Because once you have the Club of the Mother Demon, no insect can stop you in your path. That’s why the Club of the Mother Demon is the best weapon in Grounded.

So, what’s your take? Do you agree with our top five? Are there other best weapons in Grounded that we should know about? Let us know in the comments below or over on our socials here!

Related Topics:Best Weapons in GroundedGrounded
Up Next