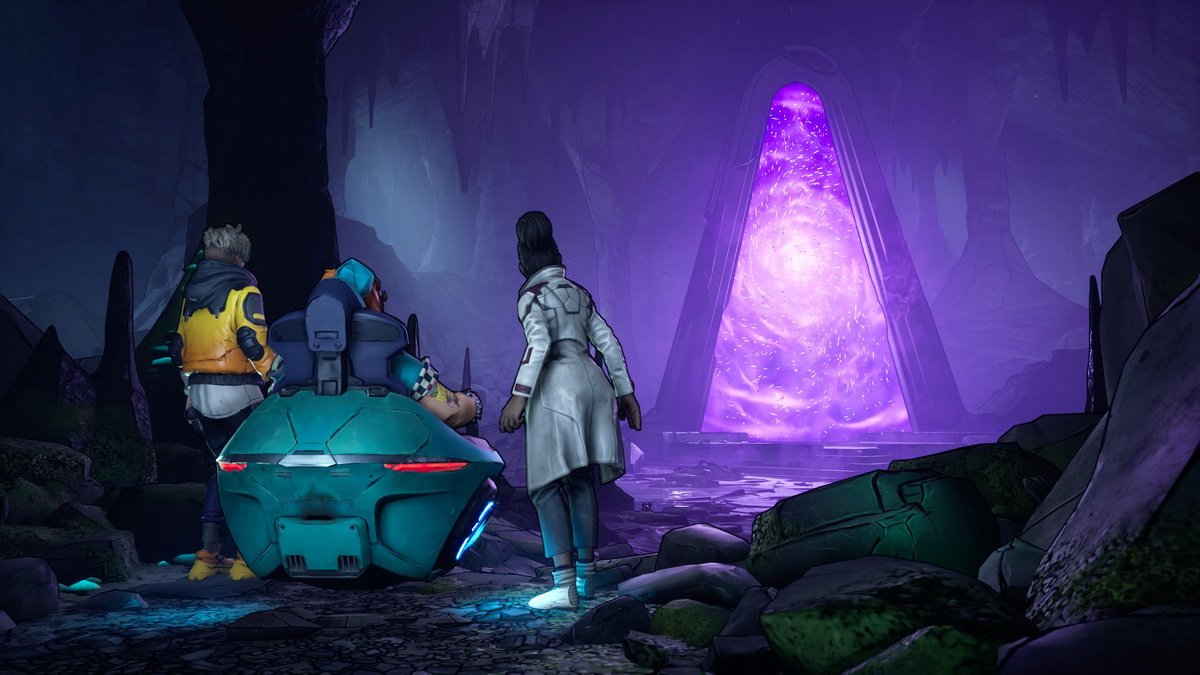 Like you, I also shared my doubts when I found out Telltale Games wouldn’t be piloting the sequel to Tales from the Borderlands. Having already spent countless hours badgering the studio to develop it, it hit twice as hard seeing Gearbox Software discarding the notion altogether. Needless to say, in spite of all the ranting, raving, kicking and screaming, they only went and developed it anyway, which went on to spark something of a divide between two families:  Borderlands, and Telltale Games. And honestly, I’ll be the first to admit that, in spite of all the memories that Handsome Jack gave me, I was definitely rooting for the latter to pick up the contract to develop the sequel.

Still, the intrigue was alive and kicking — something that eventually coerced me into a last-minute purchase at the dead of night when the only thing left to conquer was the ambivalence that plagued my Telltale-loving mind. Question is, did it keep the previous flame alight, or did it simply stub it out without so much as a care in the world? 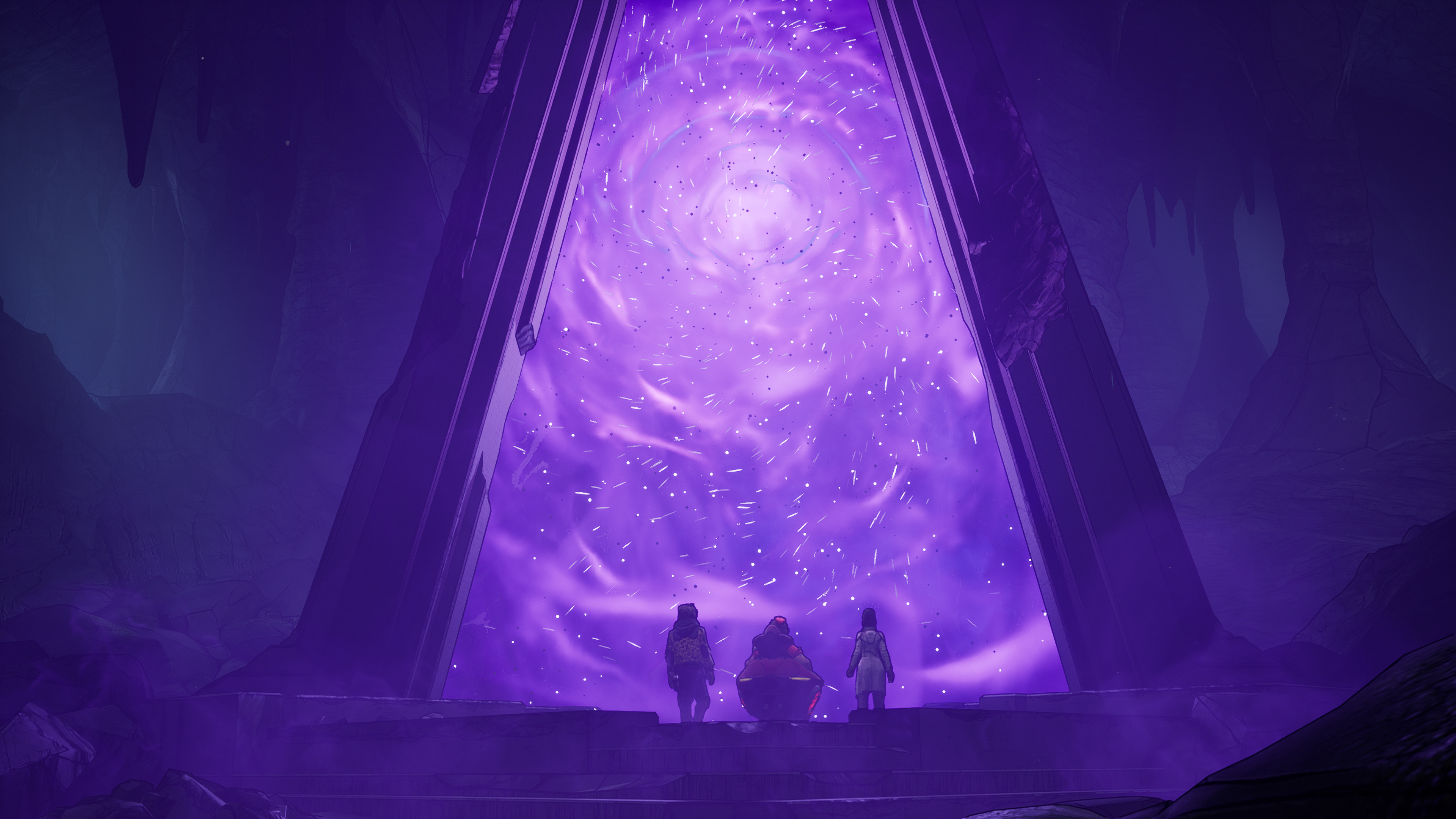 You know what they say: if you’ve played one Borderlands game, you’ve probably played ’em all. Unfortunately, there’s no real difference here, other than the fact there’s a new squad in town, and a new planet-and-Vault combo to launch yourself into. At its heart, though, New Tales from the Borderlands still hosts the same old story, only with a fresh lick of paint lathered over the top. There’s a Vault, and there are three budding Vault Hunters looking to unearth its inner treasures for the sake of aiding their home planet. Sound familiar? Of course it does — it’s basically Borderlands 1, 2, and 3, but with less in-your-face face action, and more story-based QTEs and consequential conversations.

New Tales from the Borderlands takes place on Promethea, a backwater planet that is highly reminiscent of Pandora. The story, which follows three protagonists: Anu, an ex-Atlas employee who’s goal is to create the next big thing; Octavio, a wannabe fame seeker who’s ultimately hell-bent on amassing everlasting wealth and stardom; and Fran, a yogurt shop owner who’s sole purpose is to keep a lid on her rage as she goes by the nine-to-five routine. Each of these characters, although polar opposites, are put together when rival weapons company Tediore invades the planet of Promethea. With Atlas and Tediore both searching for a Vault to gain the upper hand against one another, the unlikely trio must step in and play their parts.

Tales from the Borderlands comes in just five episodes, with each one lasting roughly 90 minutes. In each chapter, you alternate between the three heroes as the world of Promethea adapts to the choices you make. With three characters to work with, you must build friendships, unlikely alliances, and collectively work to carve a new age for Promethea. 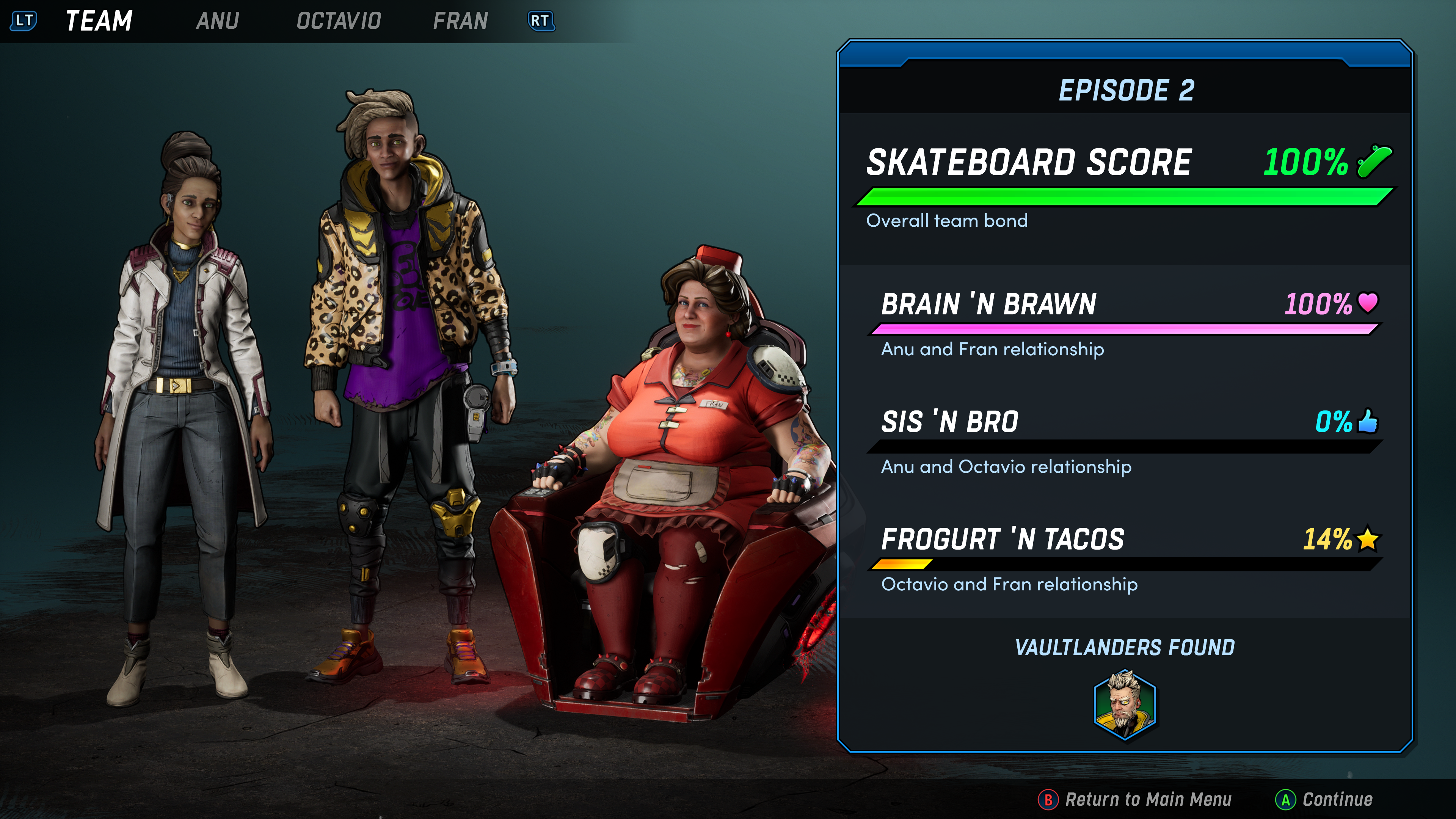 Keeping a firm hold of Telltale Games’ formula, New Tales from the Borderlands doesn’t aim to be all that technical. If anything, it opts to be more cinematic, and it asks only that you play your part by hitting the odd QTE, dialogue option, or button prompt. That said, there are a few moments that have you briefly exploring a certain area and scanning objects to help you progress deeper into the story. But at its heart, it’s a story-driven episodic journey that goes hard on the button mashing, and that’s about it.

The good news is, you don’t need to be a die-hard gamer to be able to slug your way through Gearbox Software’s sequel. Heck, you don’t even need to know the history of the Borderlands IP to get the gist of the story or the world it’s set in. It’s very much beginner-oriented, and it’s effortlessly accessible for both frequent players and fish-out-of-water newcomers who can’t tell a bumper from a trigger. Through that, there’s no real challenges to slug through here, which makes New Tales from the Borderlands far more of a lazy Sunday afternoon type of gig than an unbearably high-octane festival of brutality.

Of course, Gearbox Software did go on to incorporate other gameplay elements that didn’t quite make it into the original: Vaultlanders, a collectible-based 1v1 arena-style brawler mini-game, and Friendship Levels, a tiered system that evolves depending on the choices you and your team make in each episode. Although not essential to beating the story, they do add a bit of extra meat to the bone, as well as open up new doorways for you to return to in a second, or maybe even a third play through.

“I Will Probably Remember This…” 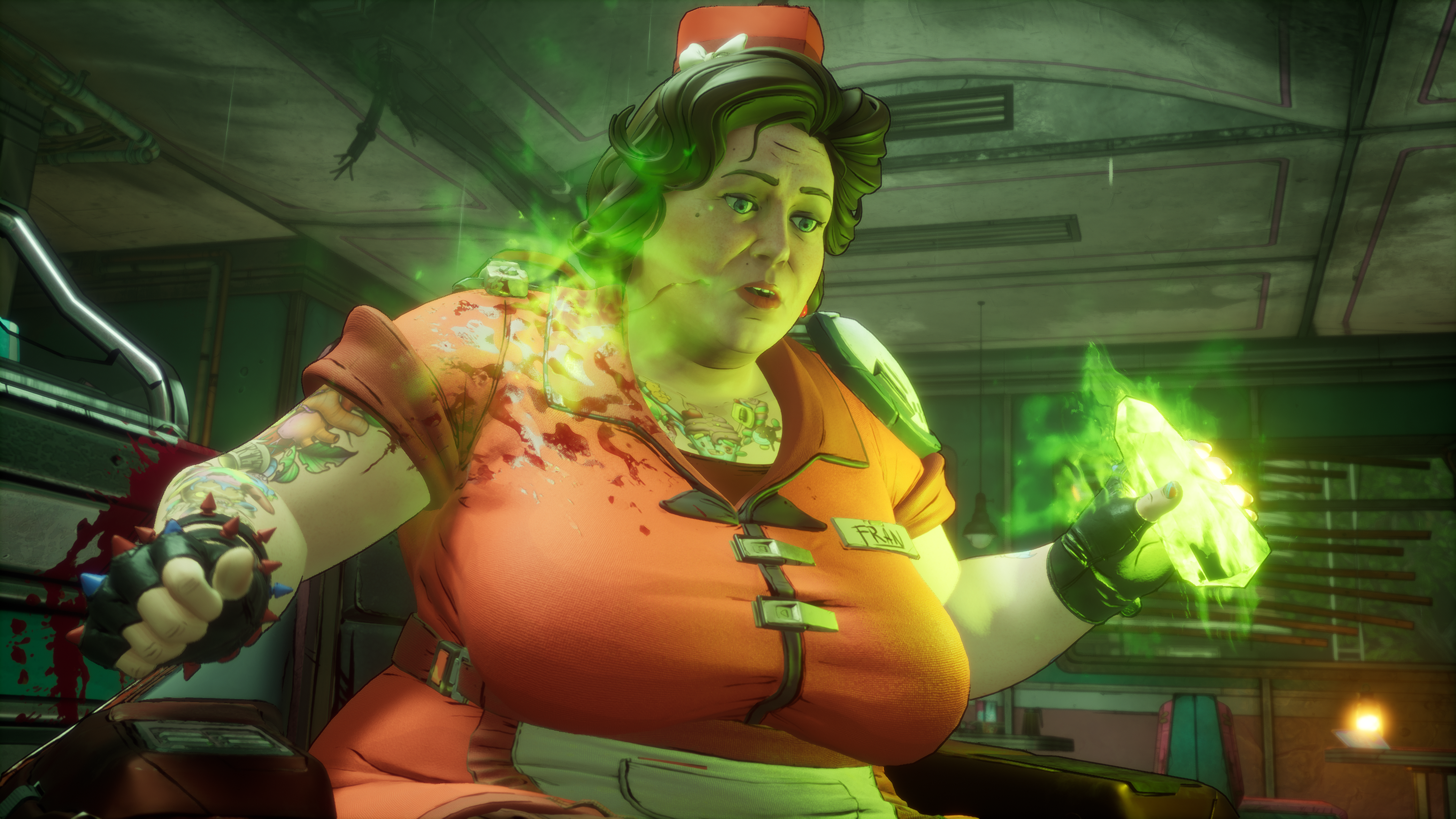 Playing through New Tales from the Borderlands is a lot like getting a spiritual reading: every once in a while you’ll receive a set amount of cards to choose from, all of which will already have their own futures embroidered within the ink. As a spectator to the reading, you don’t have a lot to do besides select which card you’d like to slide forward. And that’s about it, for upwards of ten hours until the curtain finally closes and the fortune teller urges you to sling your hook and hurls you out to dry. But it’s the significance of those cards, mind you, that compel you to keep listening, in spite of the complete lack of control.

Unlike Telltale’s spin on the IP, choices don’t necessarily impact your characters in New Tales from the Borderlands. Or at least, they don’t feel all that consequential, to the point of making you want to critically analyze every single crossroad, anyway. And while the original would’ve given you a slight heads up to tell you if you’ve made a major decision or not, this isn’t really the case here. Instead, your choices impact only the here and now, and if you happen to make a mistake when selecting a dialogue option, it doesn’t really matter, as the general flow of the narrative will continue as it would’ve done anyway — without your input.

The Chemistry Is Great, Though 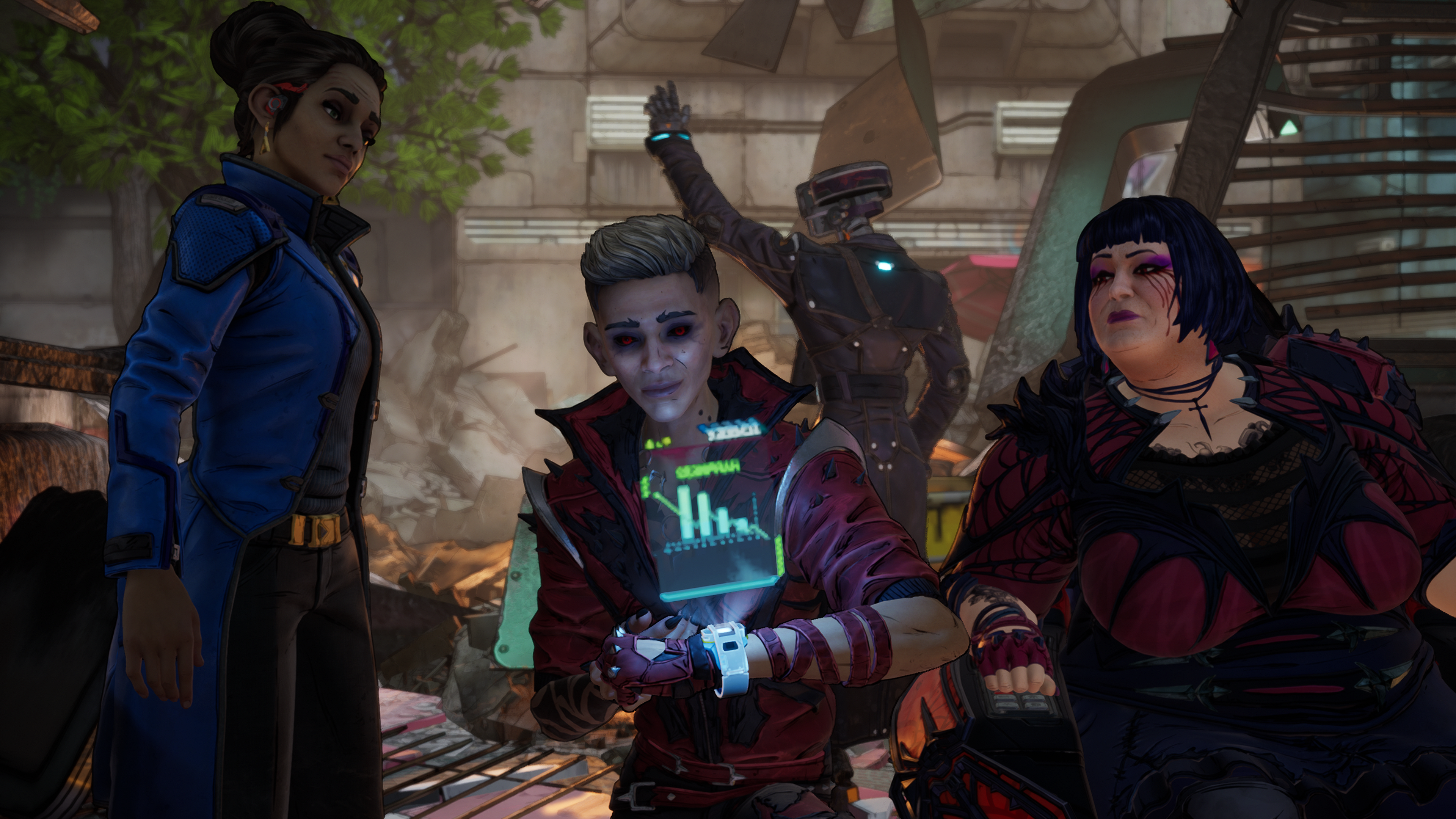 In spite of all this, New Tales from the Borderlands still boasts a hell of a good time, and its script is perhaps one of the best to ever grace the Borderlands platform. Add the fact that the chemistry between the characters is well-orchestrated and original, and you’ve got all the familiar qualities of a classic Gearbox game.

Of course, anyone who’s even the slightest bit versed in Borderlands lore will know that the series has its collection of weird and wonderful characters, something that Gearbox has kept since the series’ 2009 debut. New Tales from the Borderlands is equally rife with great characters, both old and new — and not one of them falls short on personality, either. From Brock, a sarcastic gun with a god complex, to Stapleface, a screaming sociopath with a head for mindless vandalism — New Tales from the Borderlands brings just about every flavor of character to one enormous roster. And to be honest, these are the bread and butter elements that make the game what it is. But what is it, in a nutshell? 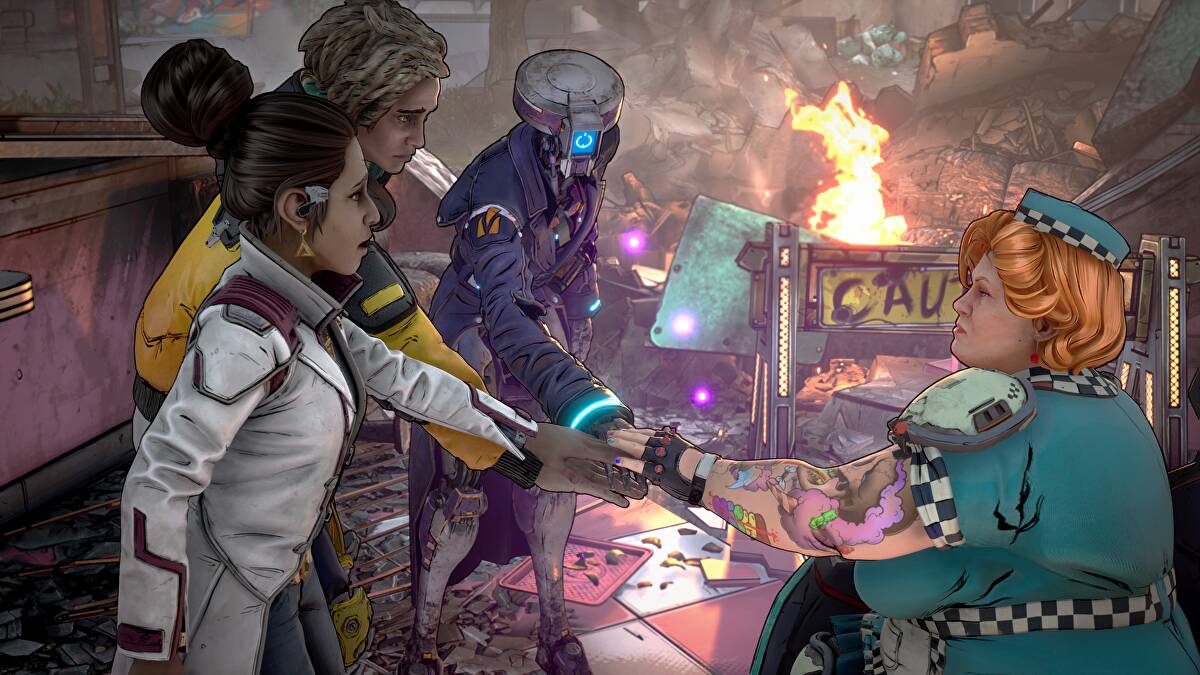 New Tales from the Borderlands brings a sturdy composition of genuinely likable, albeit slightly unorthodox characters to a familiar yet evidently outdated world. That said, in spite of the episodic journey being somewhat forgettable, its ever-evolving roster of unruly Gearbox-heavy side characters make it a tale worth holding out for. And while anyone could quite easily argue that Gearbox has squeezed just about every drop of life from the decade-old franchise by now, we do have to acknowledge the fact that, you know — there is still a bit more left in the tank, and New Tales from the Borderlands has proven this surprisingly well.

It’s no secret that the latest episodic adventure harbors more humor than actual gameplay, similar to what Telltale Games did the first time around. And while there are also a couple of QTEs and moments to explore, scan, and interact with the environment, the bulk of the game is mostly laden with back-to-back cutaways, witty humor, and high-octane chase sequences: three core ingredients that make up just about every great interactive movie. And that’s very much what this is: an interactive drama, and one that asks only that you contribute in small bursts.

Like I said, I had my doubts when I first heard Telltale wasn’t piloting the sequel. And yet, to my utmost surprise, Gearbox carried the torch remarkably well, and actually wound up presenting a tale that was worthy of our time, after all. And although its plot isn’t strewn with novelty twists and turns and what have you, it does feature a loveable cast and its signature humor which, when all’s said and done, is kind of what Borderlands is all about. With that in mind, it’s incredibly hard to sweep this one under the rug.

I Will Remember This

In spite of the borderline offensive decision to drop Telltale Games from the pilot’s seat, Gearbox Software actually wound up developing a genuinely likable sequel with all the mindless mayhem and action to boot. It isn’t quite on par with Telltale, and yet, to my surprise, I will remember this.