In a year that has been predominantly ravaged by back-to-back online multiplayer games and in-your-face meta jargon, Asobo Studio has managed to stay loyal to its roots and deliver one of the most ambitious single-player campaigns we’ve seen in years: A Plague Tale: Requiem, the long-awaited sequel to the multi-award-winning debut, A Plague Tale: Innocence.

Announced back in 2019, the 14th century-based action-adventure game went on to snag rewards for Best Game, Best Sound Design, and a multitude of other accolades over a series of gaming expos and awards shows. To not only capitalize on the success of the first game, but also conclude the award-winning tale of the beloved De Rune siblings, Asobo Studio developed Requiem, a follow-up chapter that made way for Xbox Series X|S, PlayStation 5, and PC on October 18th of this year.

Anyway, it wasn’t long before we ourselves dug our claws into it, not only to satisfy that hint of intrigue pinching at the back of our necks, but to also delve into something that wasn’t hell-bent on being online and strewn with lofty microtransactions. Question is, did it satisfy that everlasting hunger for a compelling single-player game? Or better yet, was it enough to put Asobo Studio front and center for yet another Game of the Year award? 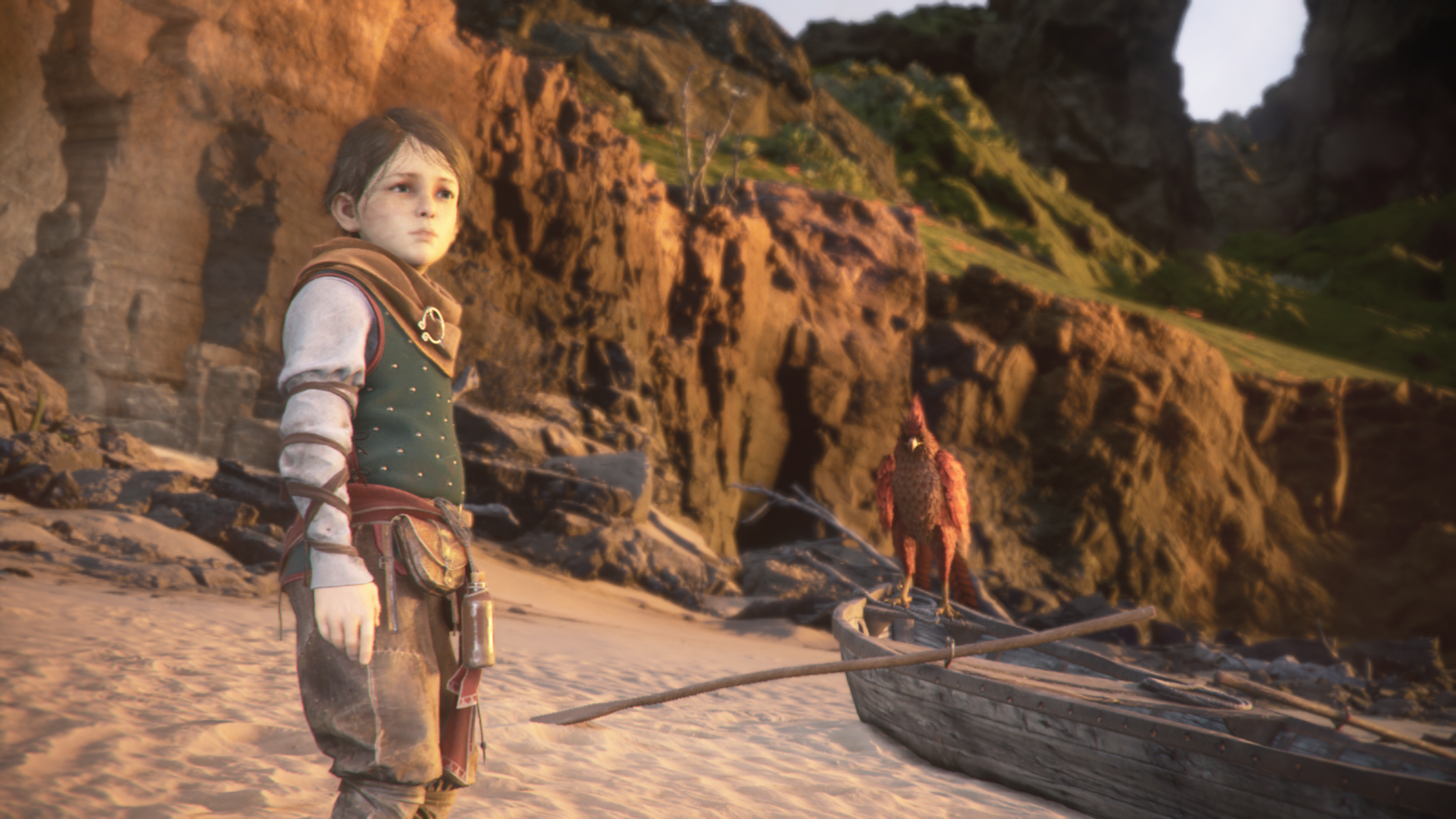 A Plague Tale: Requiem picks up with Amicia and Hugo De Rune during the aftermath of the Aquitaine incident, in which Amicia defeated the Grand Inquisitor of France and fled the province with Hugo, Lucas, and Beatrice in search of a new life. With no sign of the rats in tow, Requiem initially spreads the foundations for a tale of promise and new beginnings. This is, of course, until the prologue transpires, from which point the world plummets back into its usual dismal self.

Lumbered with Hugo’s ever-evolving curse on her shoulders, Amicia sets out on a breadcrumb trail in search of a life-long cure. However, with Beatrice and Lucas favoring the art of alchemy to banish the curse, and Hugo leaning towards a fantasized island that holds the power to revitalize the broken-hearted, Amicia must choose between pursuing science, or risking it all for the sake of granting Hugo his one and only dying wish.

Similar to Innocence, Requiem revolves around stealth, close-quarters combat, and a whole lot of chase sequences. Granted, the sequel opts for the former over all else, but never exactly to the point of putting it on par with Splinter Cell or, I don’t know — Hitman. Don’t get me wrong, the story itself is laden with stealth, but it also incorporates a generous amount of action, exploration, and crafting, which of course makes the experience a little less one-sided and flat.

The good news is, Requiem runs like a hot knife through butter: it flows remarkably well, both during potting around and when going toe-to-toe with the Inquisition. Combat-wise, the game gives you all the same tools as before, which includes the iconic sling, and an all-new crossbow to swagger around. Again, the way you go about tackling both the rats and the soldiers depends on the elixirs you concoct for your weapons. To this end, not a lot has changed. That said, Requiem definitely gets a little grittier than its predecessor, in the fact that death is more universally accepted than it was before. By that, I mean Amicia no longer cowers for her life when in danger. Instead, she forages for knives, and uses them almost as if her entire life hangs on the balance.

Given how common it is to see a launch title plagued by mechanical errors in this day and age, I have to say, Requiem is definitely the breath of fresh air I myself, along with a whole bunch of others, truly needed. It’s evidently fluid, clean-cut, and slicker than a barrel of spilt tar — which is precisely the standard we come to expect from next-gen consoles. And on that note, it’s hard to complain.

A Requiem For Asobo Studio 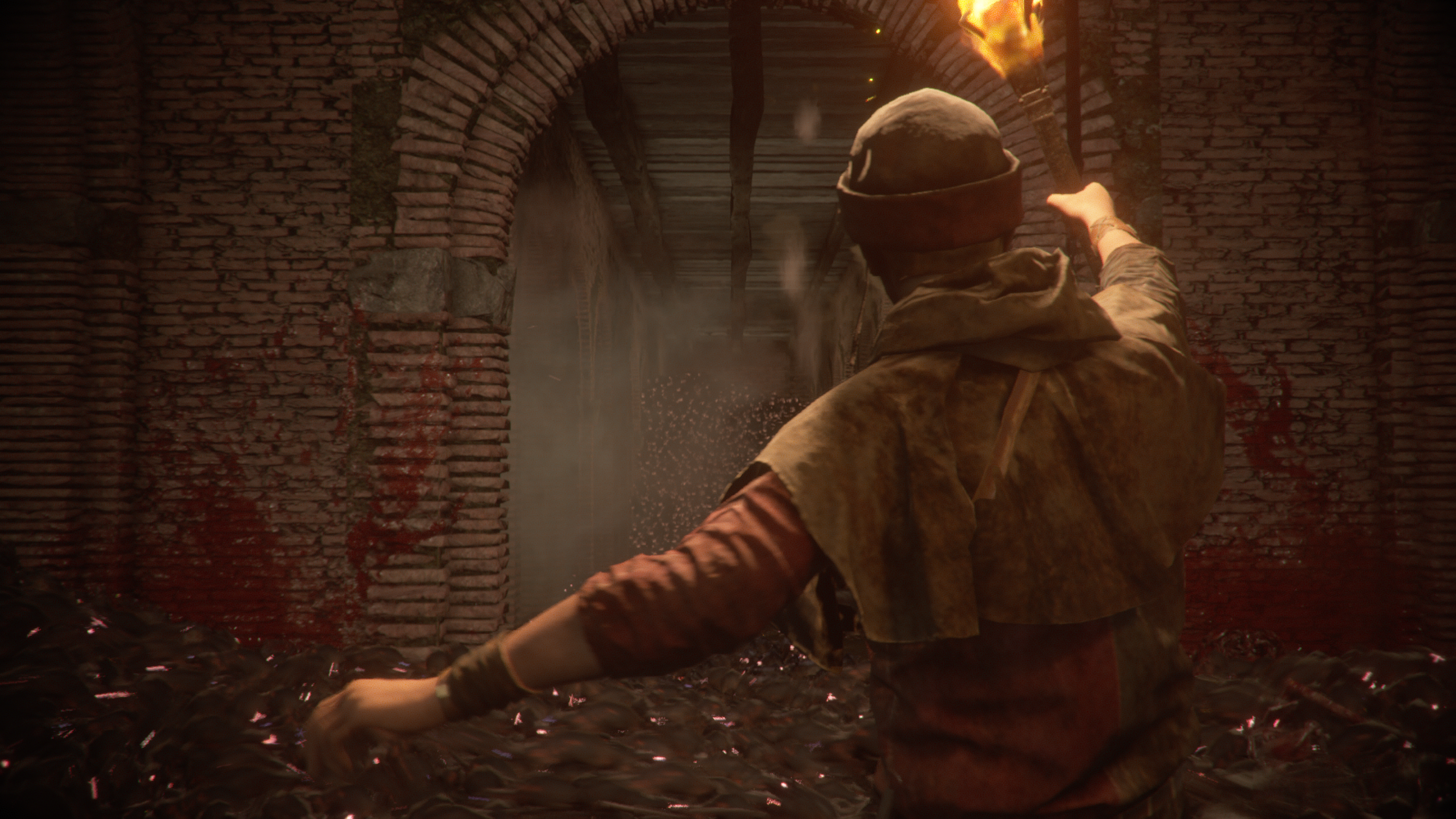 A Plague Tale: Requiem sets a tone similar to that of Innocence: opaque, melancholic, and yet oh so intriguing. Like an oil painting embellished with pastel rats and quaint architectural designs, its world serves as a wondrous, albeit chaotically poetic masterpiece in motion, and it somehow manages to merge the polar opposites together in a textbook fashion.

In spite of its blatantly sinister theme and inexcusable knack for prying on your false optimism, Requiem also finds time to pour hints of colour onto the canvas, which, when mixed together, creates a cocktail with copious amounts of flavors that not even the most palatable connoisseurs can comprehend. And if there’s anything we can say about the taste of Requiem — it’s that it doesn’t exactly come up short on flavors to keep the taste buds ignited.

Of course, Requiem is a lot like a fever dream: it puts you in and out of consciousness, and you’re never entirely sure which parts of it are based on fantasy, and which parts are conjured from your deepest, darkest fears. In what can feel like a mere moment, happiness can translate into sadness, joy into anger, and so on and so forth. This is, at least for all the while you’re playing through its fifteen-hour story, the exact mismatched pattern you’re hurled through. There is no structure, nor is there any telling what waits for you on the other end of each door. And it’s because of this that I, for one, couldn’t help but endure the cards as they came. Intrigued, and slightly perplexed, I persisted until there was nothing left to reveal.

The Chemistry Is Phenomenal 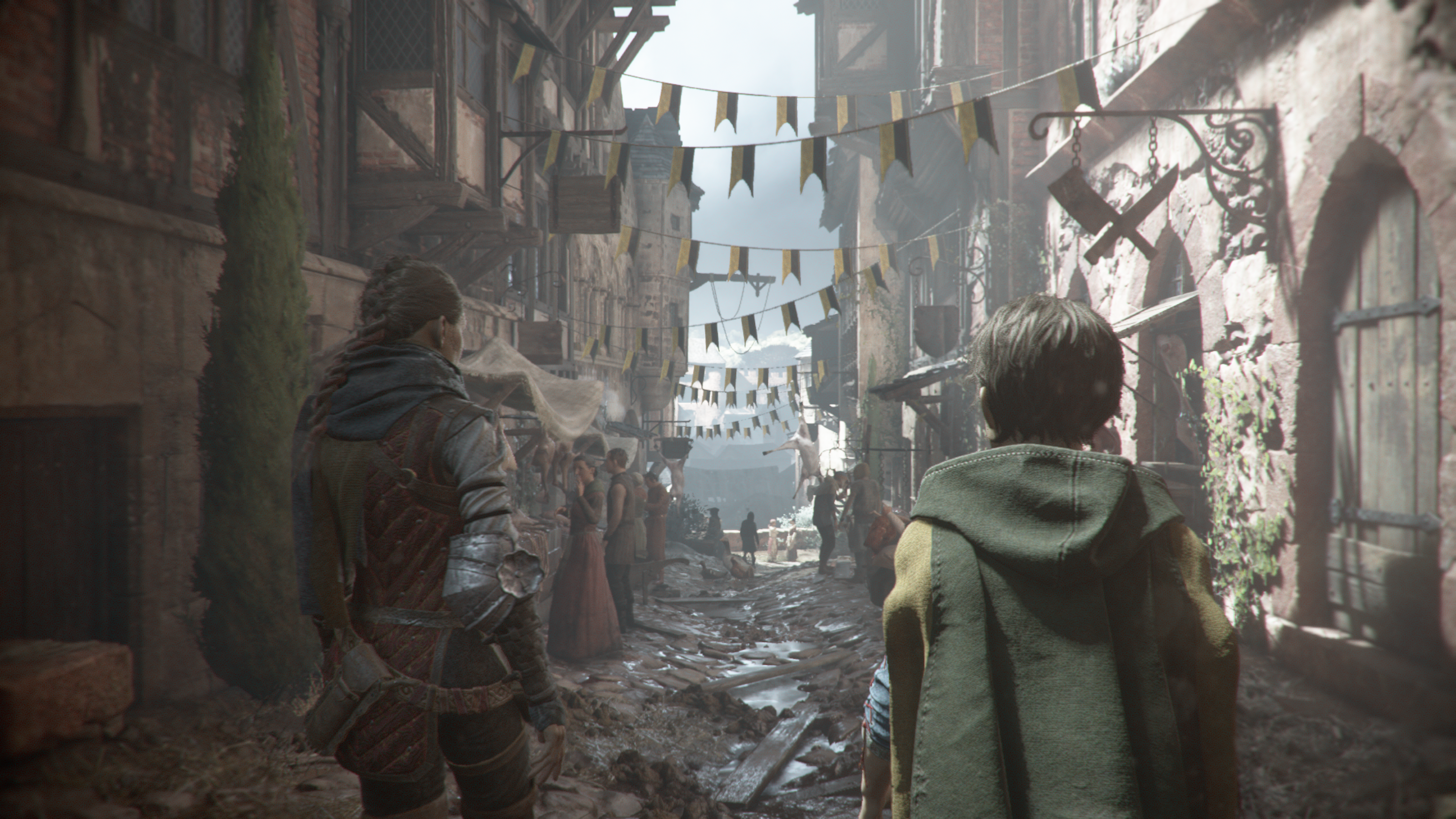 Looking back, Requiem had me from the moment in turned a run-of-the-mill escort mission into a well-orchestrated adventure that didn’t rely on all the cliches that made the likes of Resident Evil 4 the bombshell that it was. Thanks to Asobo channeling its efforts into developing two likable protagonists and a myriad of quality character story arcs, the game itself was never made to feel like a chore. And while Hugo may have adopted the familiar “woe is me” attitude that plagued his mortality in the first game, it was—at least in part—a little less pushy in Requiem.

Of course, a game without chemistry is no different from an electric box without the fuses: if there’s no connection, then there’s no spark. And if there’s no spark, then you ought to just remove yourself from the situation altogether. But fortunately for Requiem, chemistry isn’t the issue, nor is it something that I even thought to question at any point during my conquest over the rat-riddled French countryside.

Requiem’s cast is incredibly close-knit, which is precisely why it’s so special. By having four strong characters with remarkably diverse personalities and purposes, the story itself didn’t need to flesh out the roster with lackluster bodies or questionably placed NPCs. Amicia, Hugo, Lucas, and Beatrice: four incredibly well-balanced protagonists who, when put in a collective, formed a textbook quartet with all the qualities needed to chronicle an immersive story.

A Score For Days

I’m calling it now: A Plague Tale: Requiem will win this year’s Best Sound Design and Best Original Soundtrack awards. Why? Because for fifteen hours straight, I could’ve sworn I was sat at the front row to a full-blown rendition of George R.R. Martin’s Game of Thrones’ soundtrack. And I kid you not — Requiem captured just about every emotion in the book, be it fear, paranoia, or complete and utter ecstasy.

From the light-hearted sounds of a festival in motion, to the spontaneous undertones of an orchestral movement itching for a crescendo— Requiem takes you on a journey that satisfies the senses in just about every way. And honestly, if the game suffered from any technical or graphical errors (which it didn’t, by the way), it wouldn’t have been an issue, providing the score was still there to keep it afloat. 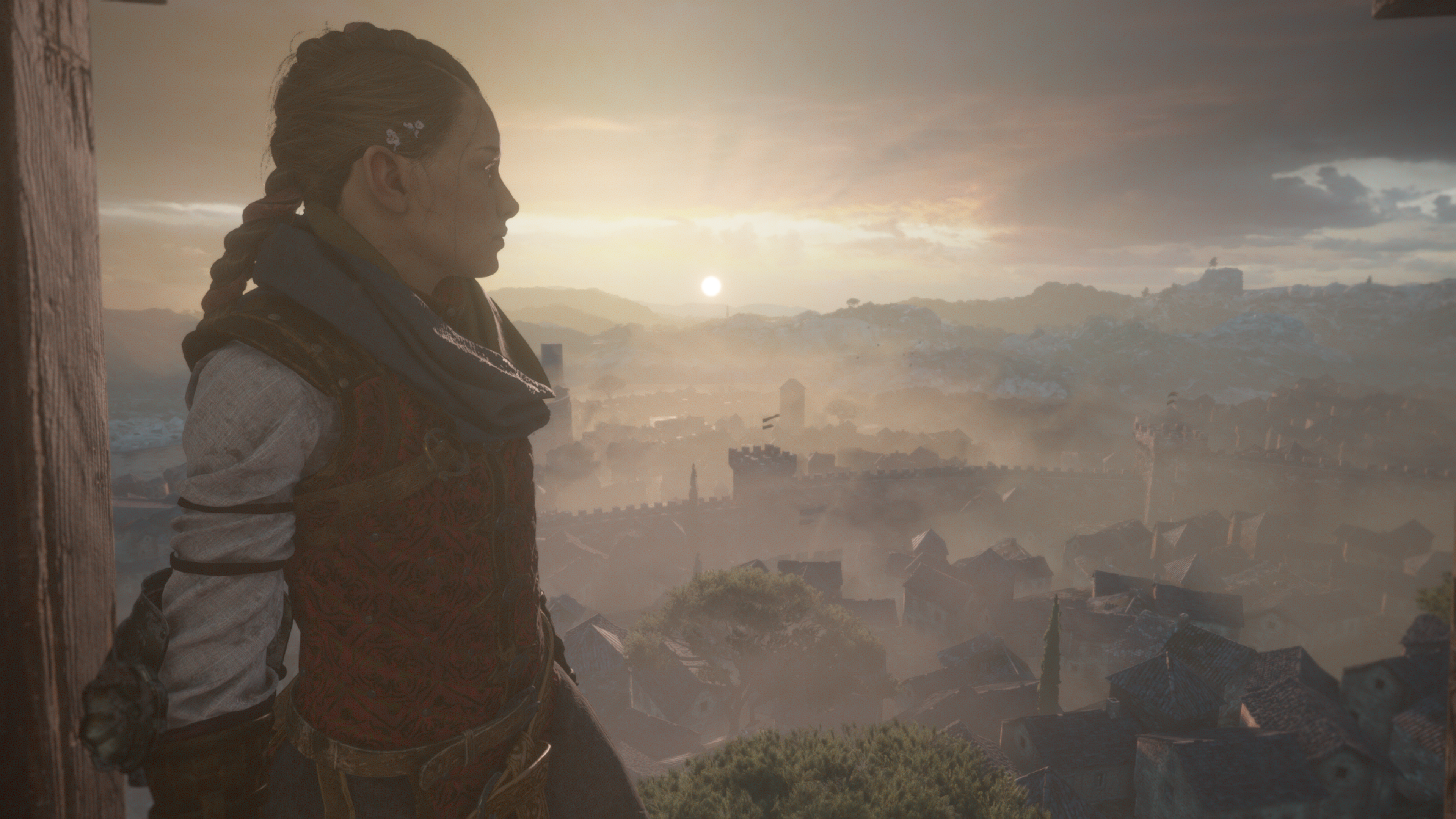 A Plague Tale: Requiem serves as a perfect reminder as to why we still adore single-player games, especially when—like the title suggests—the bulk of the modern market is very much plagued by one-note gachas and motionless live-service models with little to no heart or vigor to call their own.

Visually, Requiem is bang on the money, and perhaps one of the cleanest, most breathtakingly beautiful works of art to release since the dawn of the new console generation. And the same goes for its impeccable sound design, too, which, in all honesty, should be deserving of every accolade in the book just for being able to synthesize every emotion without fail. And honestly, this is barely scratching the surface to the whole world that it encapsulates so remarkably well.

Requiem is many things — and not one of them is bad. In spite of the odd technical error which, in all honesty, barely made a difference to the overall experience, Asobo’s follow-up chapter is an absolute triumph on all accounts. Visually, mechanically, and narratively, it checks all the boxes, and it when all’s said and done, we’ve come to expect nothing less from Asobo’s newly recruited poster child of adventure. A Plague Tale 3, anyone? Please.

You can pick up A Plague Tale: Requiem on Xbox Series X|S, PlayStation 5 and PC. For more updates on the game, be sure to follow the official social handle here.

You Had Me at Hello

Visually, mechanically, and aurally, A Plague Tale: Requiem strikes all the right boxes, which makes it exceedingly difficult for us to pick holes in. The fact is, it won us over, and I’ll be damned if it doesn’t get put forward for a treasure trove of awards come year’s end.