Today’s interview is with Brazilian Counter Strike Global Offensive player, Raphael “exit” Lacerda. He is currently playing for the line-up of the Portuguese organization Sharks Esports. The athlete is 23 years old and will tell a little of his story in Counter Strike. Raphael told us about his beginning in Counter Strike, the most remarkable moment until which player he has as the greatest inspiration in the game. 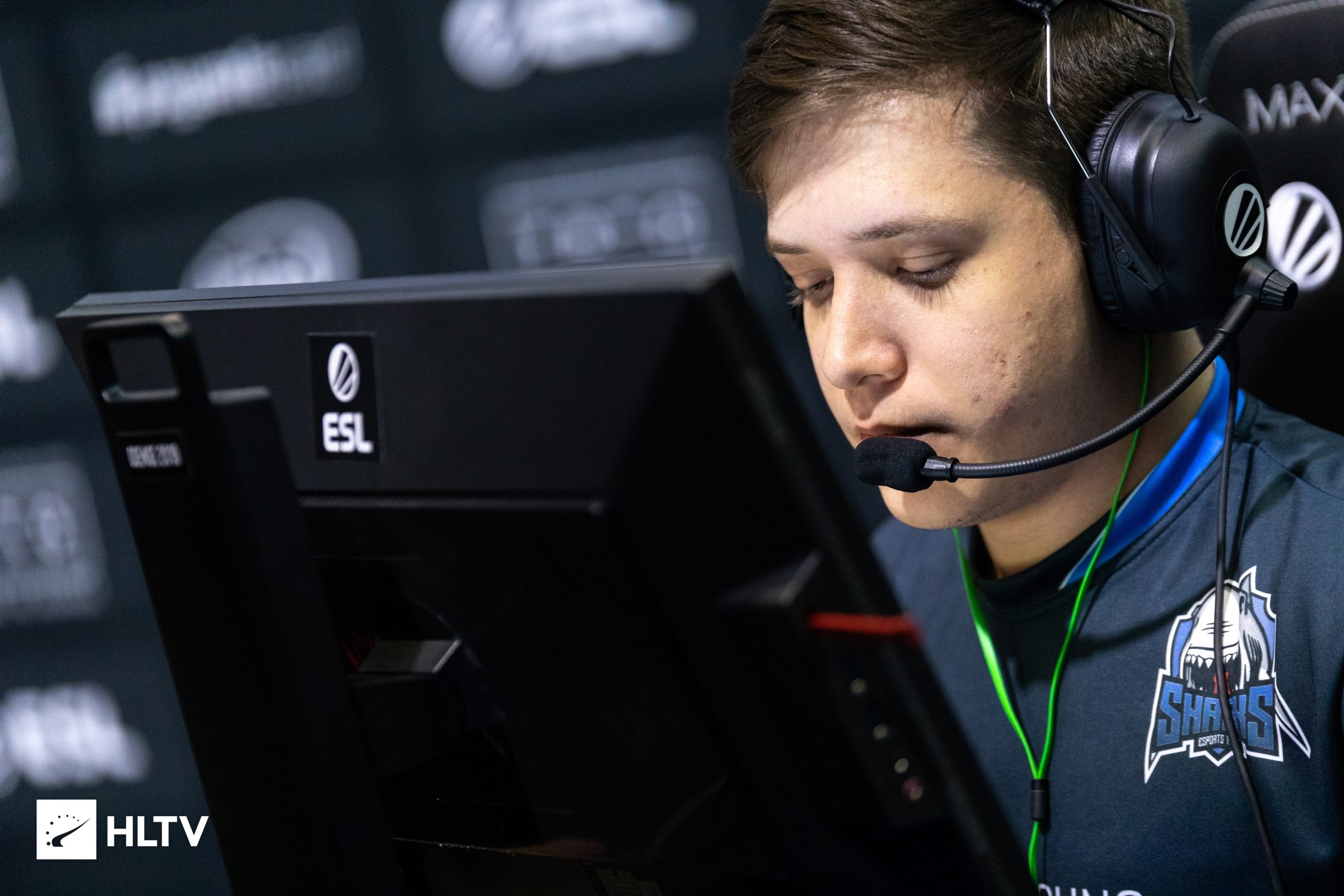 Today the Sharks Esports line-up is made up of the players Raphael “exit” Lacerda, Leonardo “leo_druNky” Oliveira, Jhonatan “jnt” Silva, Luca “Luken” Nadotti and Olavo “heat” Marcelo. The Coach is Hélder “coachi” Sancho. Check out the conversation we had with Raphael:

How did you start on Counter Strike until you became a professional player?

I started playing Counter-Strike in 2008, when I won my first computer. I was very young, I was 12 at the time, and I played with friends I met on the internet more to play with. Even because my mom wouldn’t let me go to the lan house. After that, when 1.6 died, in 2011 or so, I stopped playing and came back (already at CS: GO), in 2015. In the same footprint, with friends and more to have fun. I was playing some championships and realizing that I had potential and I started to take the game more seriously, until opportunities appeared for me

What was the most remarkable moment in your career as a CS athlete so far?

I think 2 moments were very remarkable in my career. The first was the victory of LaLeague Season 1, against FURIA. The second, victory against North at the ProLeague Finals in Odense, in 2018. These are two moments that I will never forget in my life.

Have you ever thought about giving up being a professional player? Did you try your career in some other modality?

I believe not, since 2015 that I’ve been taking the game seriously, giving up was never an option. But I can say that I already doubted my potential at times, I thought I would never be a player who could make a difference or win the big championships, and I think that this LaLeague S1 that I said above was a game changer for me, I proved to myself that I could do it.

Unfortunately Sharks will not participate in the ESL Pro League 11 due to the Coronavirus aiming at the health of the athletes, what is your opinion about this difficult decision?

It was a difficult decision but I believe that it is totally correct. The health and well-being of the players must always come first, and I am grateful to Sharks and ESL for having managed to reach a consensus that would benefit everyone.

How is the routine at the Gaming Office in Portugal? How many hours a day do you practice?

Unfortunately you were not successful in the Closed Qualifier of the Americas for ESL One Rio, even so, what was the expectation of playing a Major in Brazil?

The expectation was the highest possible. We hit the post on the last Berlin Minor and that left us with a bitter taste. For me it was even more special because I’m from Rio de Janeiro, besides everything I would have the possibility to have all my family members present, I would play in my state. But unfortunately we did not deserve the vacancy and now it is time to move on to the next one.

Psychology Applied to Games today is normal in Esports teams, do you work with a psychologist to improve performance within the game?

Yes, we work with the psychologist Carlos, an excellent professional that Sharks hired to help us. He is very important in our growth. I believe that the mental part is one of the fundamental parts for the esports competitive, mainly at a high level.

Which CS: GO player do you have as your inspiration?

I don’t usually get inspired by other players, i just try to do my best and always evolve. Try to be a better player every day and help my teammates. But one player I always liked to watch was autimatic, who now plays for Gen.G.

As mentioned above in a question to the player, Sharks Esports was preparing for the ESL Pro League dispute, but due to the Coronavirus Covid-19 the team asked not to be part of the competition. As much as the ESL’s decision was that the games were played online, the travel restrictions in Europe, the health and safety of the players, made it impossible to participate in the championship. The club reached an agreement with the organization not to join the championship with the guarantee of returning next season. The announcement was made in Portuguese on Sharks’ official Twitter.