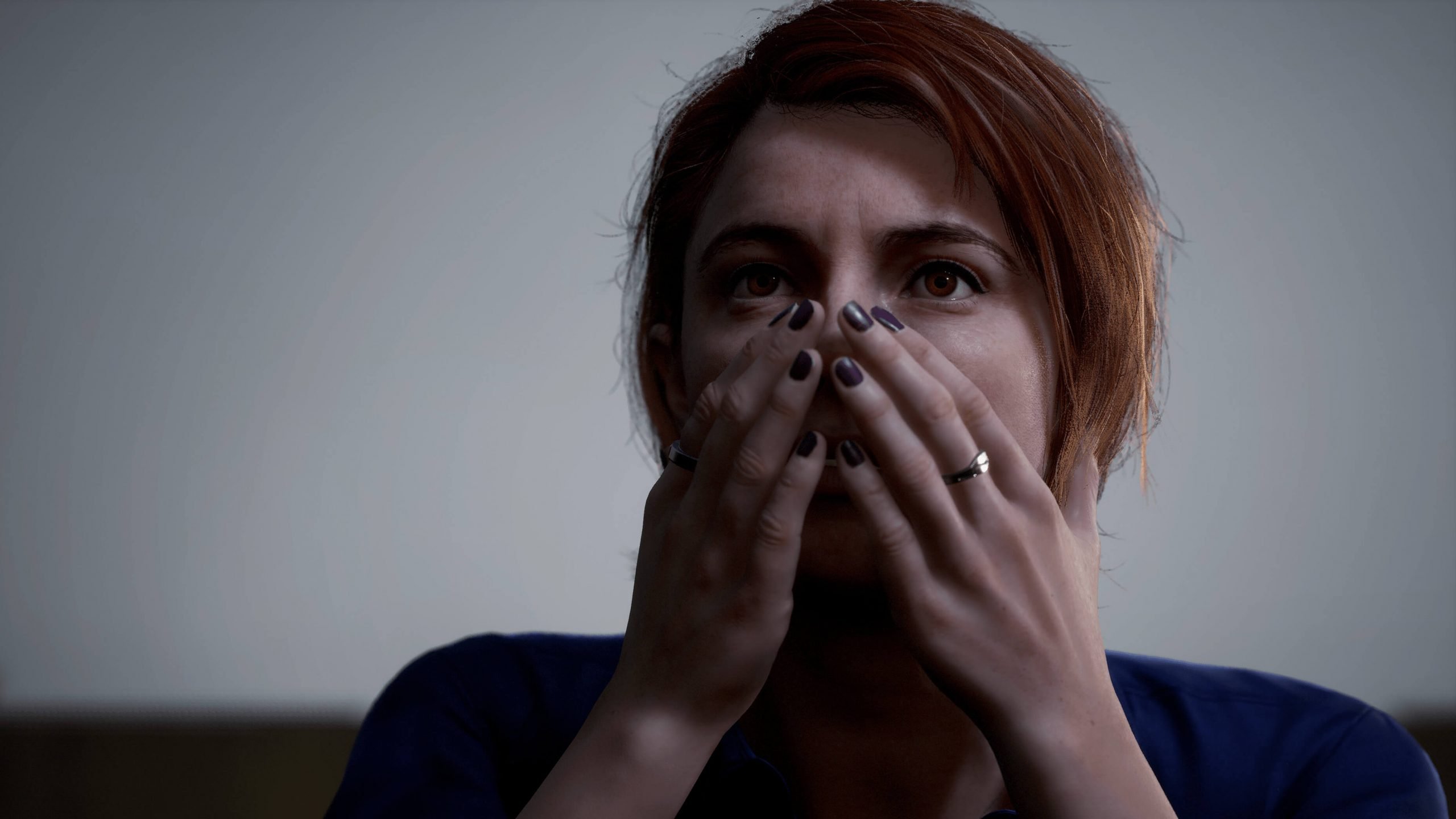 The Devil in Me signals the end of an era for Supermassive Games’ much-loved survival horror anthology. Question is, has it set the scene for another series of noteworthy books, or has its ink become a little worse for wear after curating just four tales?

The Dark Pictures Anthology has finally, after four feature-length chapters, closed the book, and has left only a few fragments of what’s to come in the forthcoming second season. And what better way to draw the curtain on the first than to rustle up a slightly twisted, albeit irresistibly replayable story, right?

The Devil in Me marks the fourth and final entry to the choice-based story-driven saga, and just so happens to set the stage perfectly for Directive 8020, Supermassive Games’ next link in the survival horror series. Rounding back to The Devil in Me, though — what did we think of it? Did it serve as a hearty farewell to the pilot season, or was it disappointing enough to hammer the final nail in the coffin for the four-piece anthology? 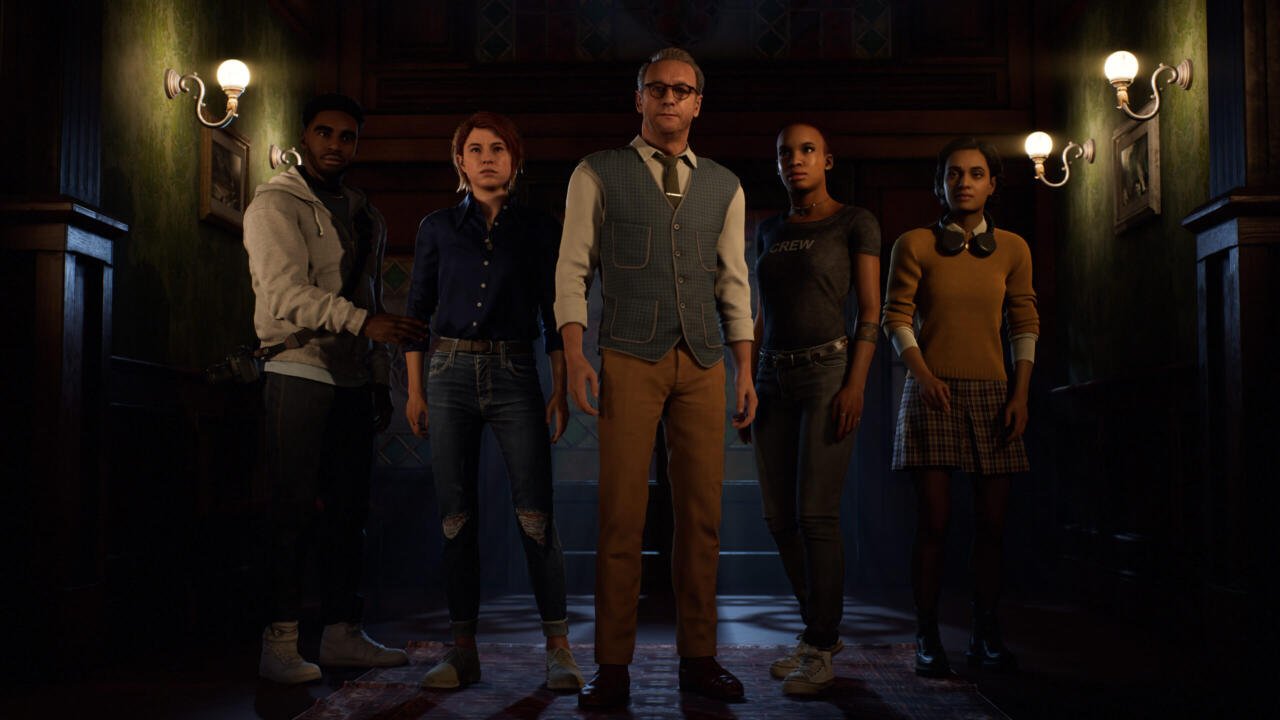 The Devil in Me places you in the world of five investigative journalists, who, collectively, strive to provide a deeper insight into the twisted world of H.H. Holmes, a prolific killer who, once upon a time, monopolized the World’s Fair Hotel, a quaint but woefully barbaric labyrinth strewn with trap doors and mechanical mannequins.

Your journey starts off with the classic survival horror buildup: a thick layer of fog, an oddly distant but intriguing caretaker, and the remnants of a forsaken tomb that’s under the guise of a charming island hotel. As a crew of five, you must enter its hidden world of horrors and document the monstrosities that H.H. Holmes left behind and, weirdly enough, still continues to unravel long after being sentenced to death.

The question you’re forced to answer is this: who is the puppeteer impersonating H.H. Holmes? And, why is the World’s Fair Hotel being made to recapture the nightmares that once consumed it? Every choice you make tailors a new narrative, and it’s entirely up to you to formulate a plausible conclusion, either alone, or with your entire crew alive and kicking. 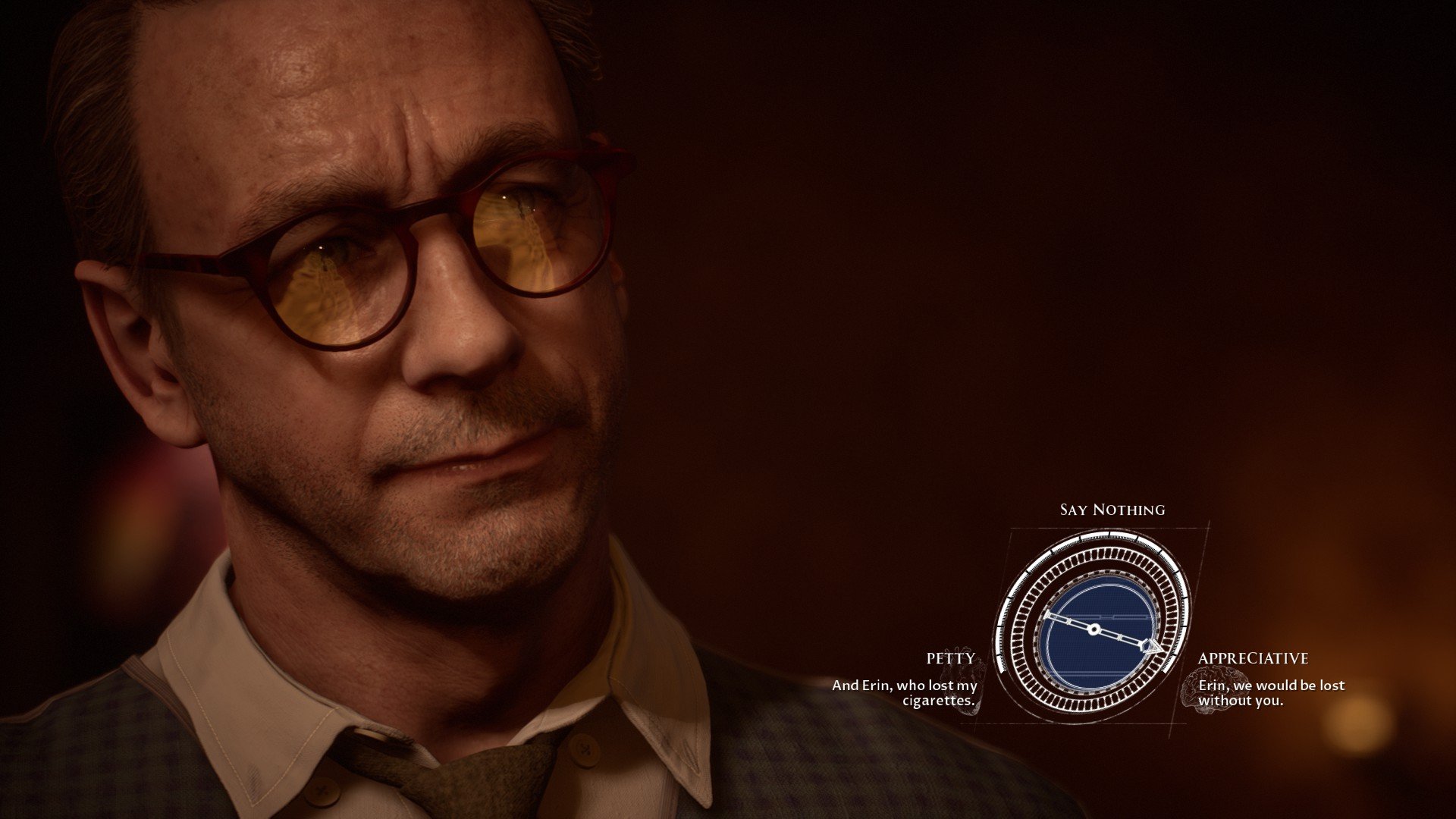 There’s this old saying: if you’ve played one of Supermassive Games’ horror titles, then you’ve probably played ’em all. And unfortunately, even four turns in, The Devil in Me retains the same old formula. This isn’t to say that the one-two blueprint isn’t effective, though. It’s just that, well, we’ve seen it plenty of times before — to the point of making us question whether or not Supermassive Games even has any other tricks up its sleeve, or if it’s simply hellbent on squeezing the same old cash cow till it’s dead and buried.

The Devil in Me brings the same elements to the table: choices, casualties, and consequences. Exploration and interactivity is minimal, as we have come to expect from the story-driven saga, though it does make a slight effort to add more than previous chapters. And by that, I’m talking about a puzzle here or there, a smidgen of climbing, and some good old fashioned sneaking sequences to help whet the whistle. Apart from that, though, the story is already laid out for you — and your only goal, really, is to go along with it until you’ve either said the wrong thing and burnt a friendship bridge, or failed a QTE and gotten one of your characters brutally murdered.

Of course, adding a few additional bits and pieces to increase player interaction is a big step up for The Dark Pictures. And yet, a lot of it is surprisingly clunky and somewhat restricted. The point there is that, unlike previous games that had a certain fluidity, The Devil in Me isn’t all that smooth, and actually makes you feel slightly nauseous from the excessive amount of shoulder-hugging camera angles in enclosed spaces. 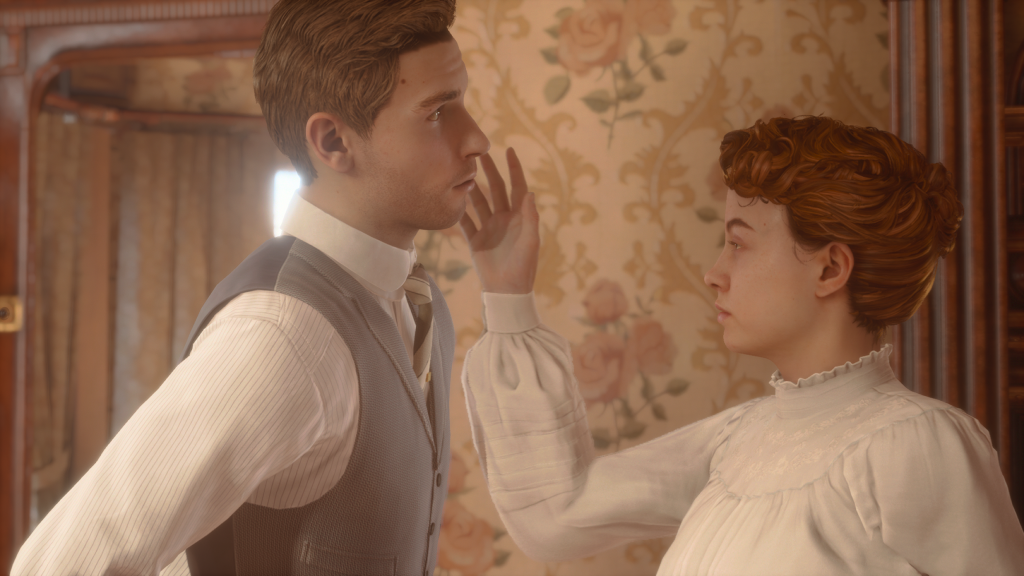 Given the fact that The Devil in Me stems from the same studio that developed The Quarry—one of the most visually impressive games of 2022—it does come as a surprise to see the latest instalment laced with questionably bad graphics — to the point of making it appear as nothing more than a double ex-gen exclusive. What went wrong is another question, as Supermassive Games definitely has the mocap technology to produce fantastic visuals. The Devil in Me, however, is in receipt of some of the worst graphics in the series to date. And that’s disappointing, truly.

Don’t get me wrong, some of the visuals are evidently clean — Charles Lonnit, especially. But that’s one character out of a pretty extensive roster, and it definitely spoils the immersion when only one protagonist bears all the qualities to be considered a genuine person of interest. Characters like Jamie and Mark, on the other hand, clearly received the short end of the stick, as I couldn’t quite tell whether their scenes, in particular, were unintentionally bad, or just poorly designed, in general.

Lip synchronization, also, was a bit hit-and-miss — to the point of it being almost irritatingly laughable. Besides Charles Lonnit who, again, had all the right TLC from Supermassive Games, the rest of the cast received only a pittance, and not as much attention to detail as anything else in the scene. To put it short, the visuals were on par with Man of Medan at best, a game that launched just shy of three years ago. Has a lot changed since then? Surprisingly not, and it shows. 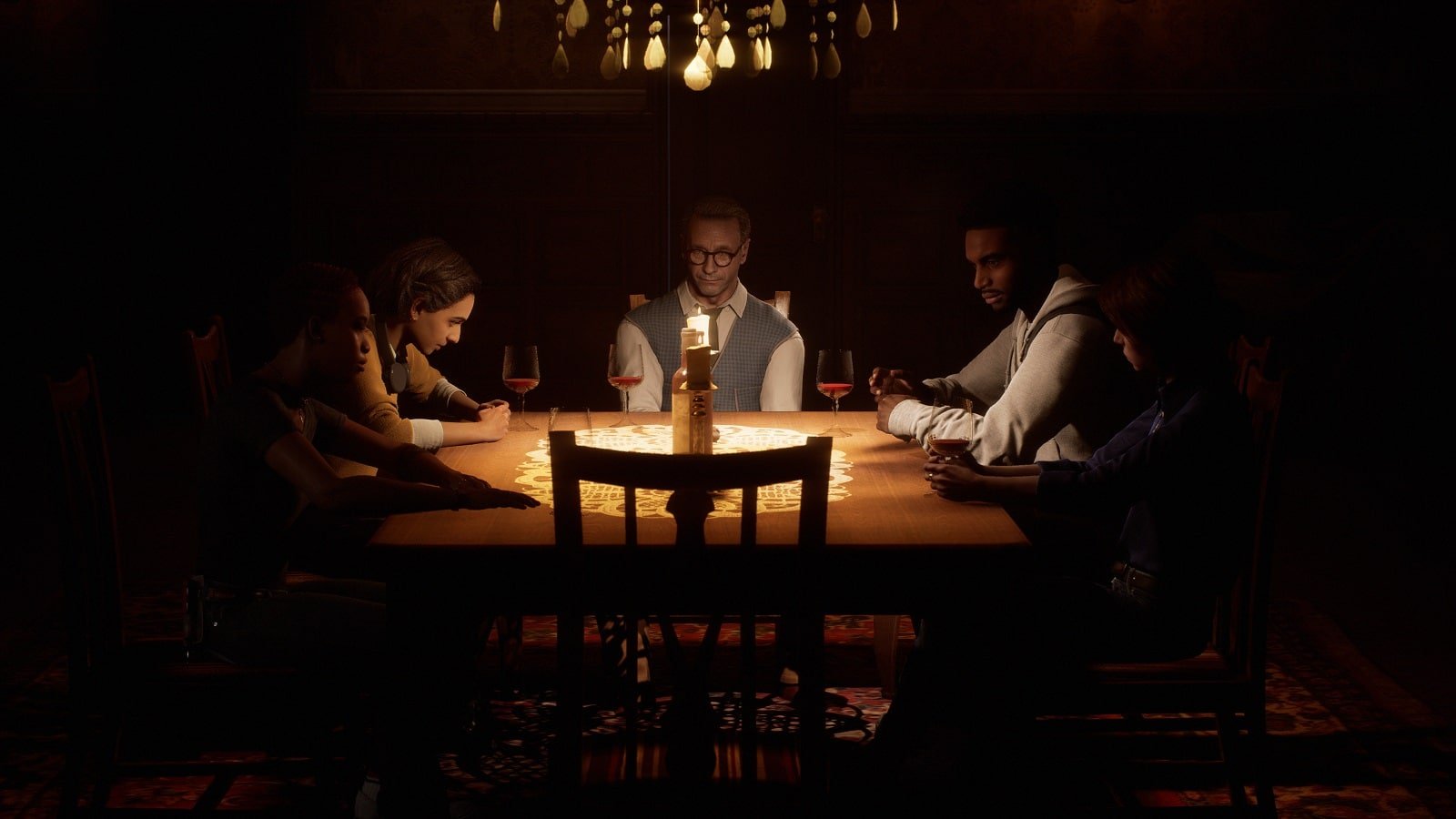 They say you can’t teach an old dog new tricks. And you know, I’m inclined to agree on this occasion, especially if we’re talking about The Devil in Me’s spontaneous approach to adding a number of features that, in all honesty, don’t quite sit on par with games of today’s standards. On one hand, we have to give kudos to its developer for trying to add spice to a stale mix, but when all’s said and done — they kind of had it right the first time. And honestly, there was nothing wrong with games like Little Hope and House of Ashes.

The point I’m trying to make is, things were good. Yes, they were a little predictable, but we knew what we were getting — and it was good. And so, Supermassive Games’ sudden shift in direction at the last hurdle is strange, to say the least. Will it improve in the second season? Who knows. At this point, though, there are quite a few kinks to iron out, and until they’re smooth and silky, The Devil in Me will continue to be nothing more than a broken capsule infused with half-baked novelties.

The thing that rings the death knell for The Devil in Me is its overall clunkiness. It’s bad, and it’s wooden enough to break whatever atmosphere the setting occasionally rustles up. Butter it up a little and, who knows, there could be a pretty great experience somewhere here. Until then, though, it’s hard to recommend it to anyone outside of the Dark Pictures’ super fan club. 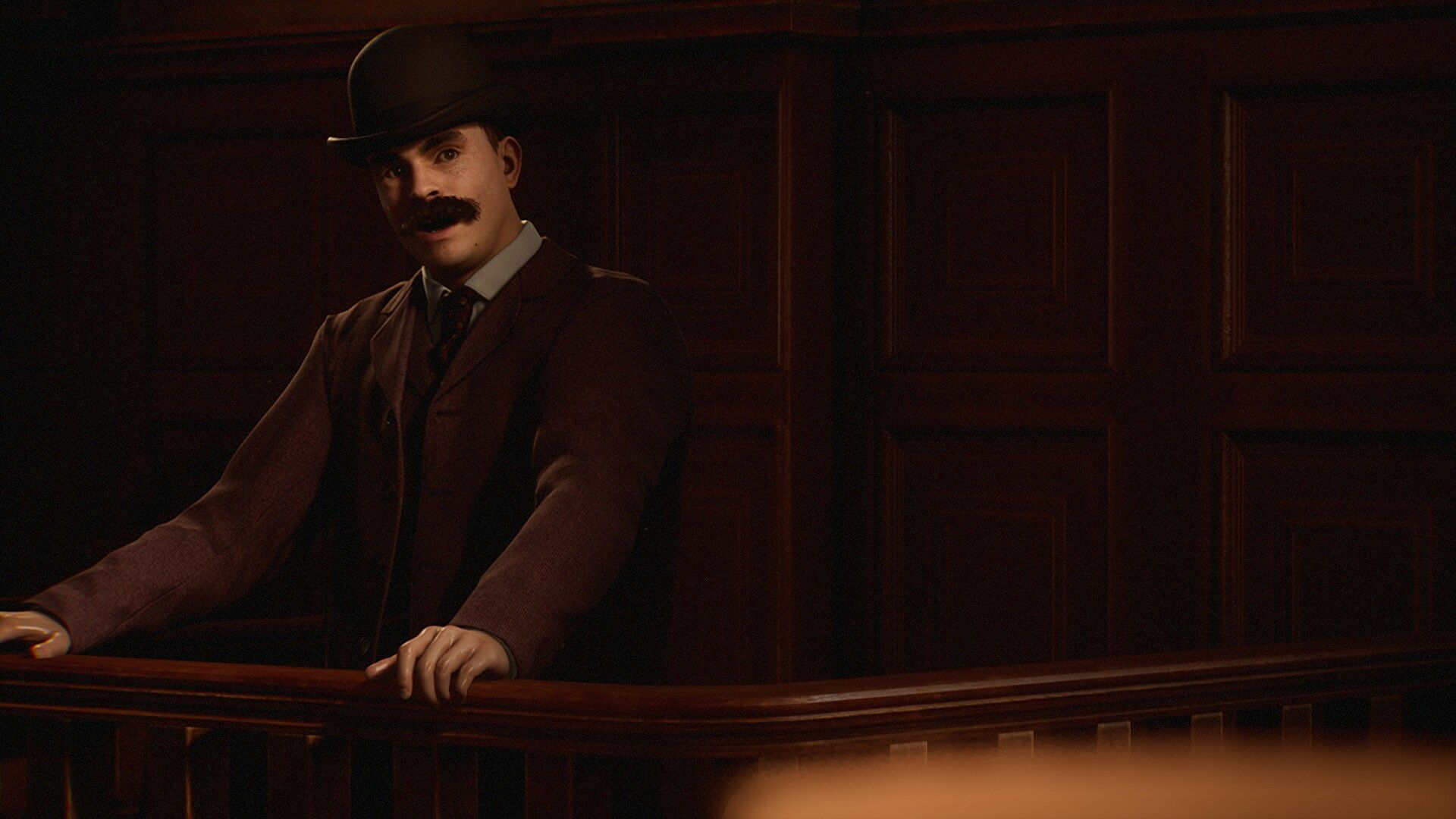 On the surface, The Devil in Me has all the right ingredients to conjure a fantastic survival horror game. Unfortunately, the questionably poor and absurdly janky graphics and mechanics make for a pretty lame excuse for a final chapter to an otherwise great series. There are moments, of course, that make you want to travel much deeper through the rabbit hole — as any supposedly haunted hotel would. Problem is, the immersion is often disrupted by Supermassive Games’ overall laziness when it comes to sanding down the finer details. Yes, there’s this annual deadline that the team long to meet with each passing instalment — but a bit of extra TLC would’ve definitely gone a long way with this one. Heck, even a delay or two, if only to grease the wheels a little more before serving it up.

Don’t get me wrong, World’s Fair Hotel is an excellent choice of location for a horror game. In spite of the game wanting you to replay the same story over and over again, though, I couldn’t help but feel ready to check out after a one-night stay in the most haunted room it had available. Shame, really, as there’s clearly a lot of potential here. As it stands, though, until Supermassive Games can fix one or two technical errors and give the characters a complete overhaul — it just isn’t worth the price of admission. Does it have the potential to be great? Yes. Will Supermassive devote enough time to making it so? Who knows. Here’s hoping, anyway.

One Night Is Enough, Thanks

On the surface, The Devil in Me has all the right ingredients to conjure an excellent survival horror game. Its slew of technical errors and questionably lazy choices, however, make it pretty darn forgettable and, sadly, a disappointing ending to The Dark Pictures’ first season.