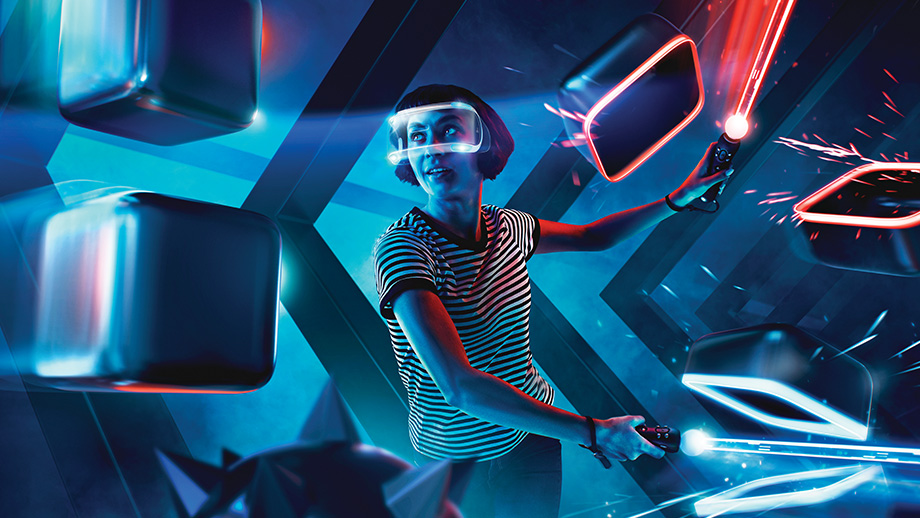 In spite of the countless games and experiences that already flesh out its library, the world of virtual reality is still very much considered to be in its infancy. And while its progress as a platform marches on to crush new and exciting heights, few titles still retain a foothold in its ascension, particularly games that are classed as timeless works of art. Like, Beat Saber, for example.

Beat Saber is everything you’d expect it to be: rhythmic, action-packed, and effortlessly stylish. Its goals are to the point and its gameplay is, without a doubt, easy to comprehend and even master with a bit of practice. Question is, are there any games that come as close to acquiring all the same original qualities as it? Well, yes, and no. If we had to put a pin on five of the closest lookalikes in VR gaming, then we’d favor these over the alternatives.

It’s no secret that Harmonix came hot off the press with instant best-selling rhythm sagas such as Rock Band and Dance Central VR. Well, in a bid to keep this stream of success alive and kicking, the studio went on to develop Audica, an all-new VR rhythm-based shooter that put players front and center to an EDM opera of beats, bass, and ballistics. Like Beat Saber, you could say, but with more pistol-whipping than saber-slashing.

At its core, Audica is a total love letter to the world of rhythm and all things neon. Remove a few of its layers, however, and it’s also a pretty fantastic fitness game, with countless tracks and modes packed full of bullet-sweating routines and optimal beats. Beat Saber it most certainly is not, but when its Harmonix piloting the ship, it doesn’t exactly need to be, either. In this instance, the studio’s reputation just sort of speaks for itself.

Where you’d usually find a solid wrist workout with the likes of Beat Saber, Synth Riders fills in the gaps by incorporating the rest of your body movements to complete its levels. Whatever it is you’d prefer to do—dance or flail—the game is entirely in your hands to assemble, so long as you link up your movements with the choreography and give it your absolute all.

The good news is, the concept is mostly the same as its rhythmic alternatives: you thrash out your best moves to a volley of neon pink and white nodes as they fire at you over a high-powered EDM soundtrack. That’s really all there is to it, and it’s because of its simplicity that it satisfies one of the largest demographics in the world, both in gaming and in fitness.

While on the subject of Harmonix’s long line of highly successful rhythm-based franchises, it seems only right that we throw in Dance Central VR to this list for good measure. And it’s safe to assume that, from the way you probably searched for rhythmic games that go hard on the fitness routines like Beat Saber, then you’re open to the idea of going in for a full body workout.

Fortunately, Dance Central VR brings just about every element of old and new and envelopes them all into one humongous collection of flavored beats, themes, and routines. It’s the same old Dance Central game you probably fell in love with years ago, but with a major mechanical overhaul and a fresh batch of updates tracks and challenges. And so, if you’re keen to jump back into those old boots, then be sure to reignite the dancefloor with Harmonix’s 2019 classic.

OhShape is one of the best VR alternatives to Beat Saber on the market, a status which it has held onto pretty tightly since its late-2019 launch. Its idea is highly reminiscent of the British game show “Hole in the Wall,” which is a local adaptation of “Human Tetris,” a Japanese original that puts players against a series of walls with various human cutouts on them.

Anyway, OhShape cruises along the same line as both TV game shows, which means you can know what to expect when booting up its virtual world.  Bottom line is this: if you can morph your body into all sorts of different shapes and sizes, then you’ll probably get a good laugh out of OhShape. And again, if you’re looking for a full body workout that’s also pretty relaxed and stylishly entertaining, then it’s a total win-win, straight up.

Similar to Beat Saber’s neon palette of sparkling nodes and rhythm-infused rails, Audioshield has you carrying out all the same motions, only with two glowing shields instead of sabers. With a generous selection of original soundtracks and a whole library of customizable beats to boot, this all-in-one rock-and-rhythm world jolts to life as an absolute powerhouse of a VR entry.

If it’s an adrenaline-fueled fitness regimen you’re after, then you’ve only gone and found it here, buried between the dozens of Beat Saber lookalikes that bulk out the market. Or if it’s a dubstep-heavy sludge through the smash hits that you’re interested in embarking on, then hey, you’ve just found that, too.

So, what’s your take? Will you be picking up any of the above five this week? Let us know over on our socials here or down in the comments below.

The Day Before: Everything We Know

Bramble: The Mountain King — Everything We Know