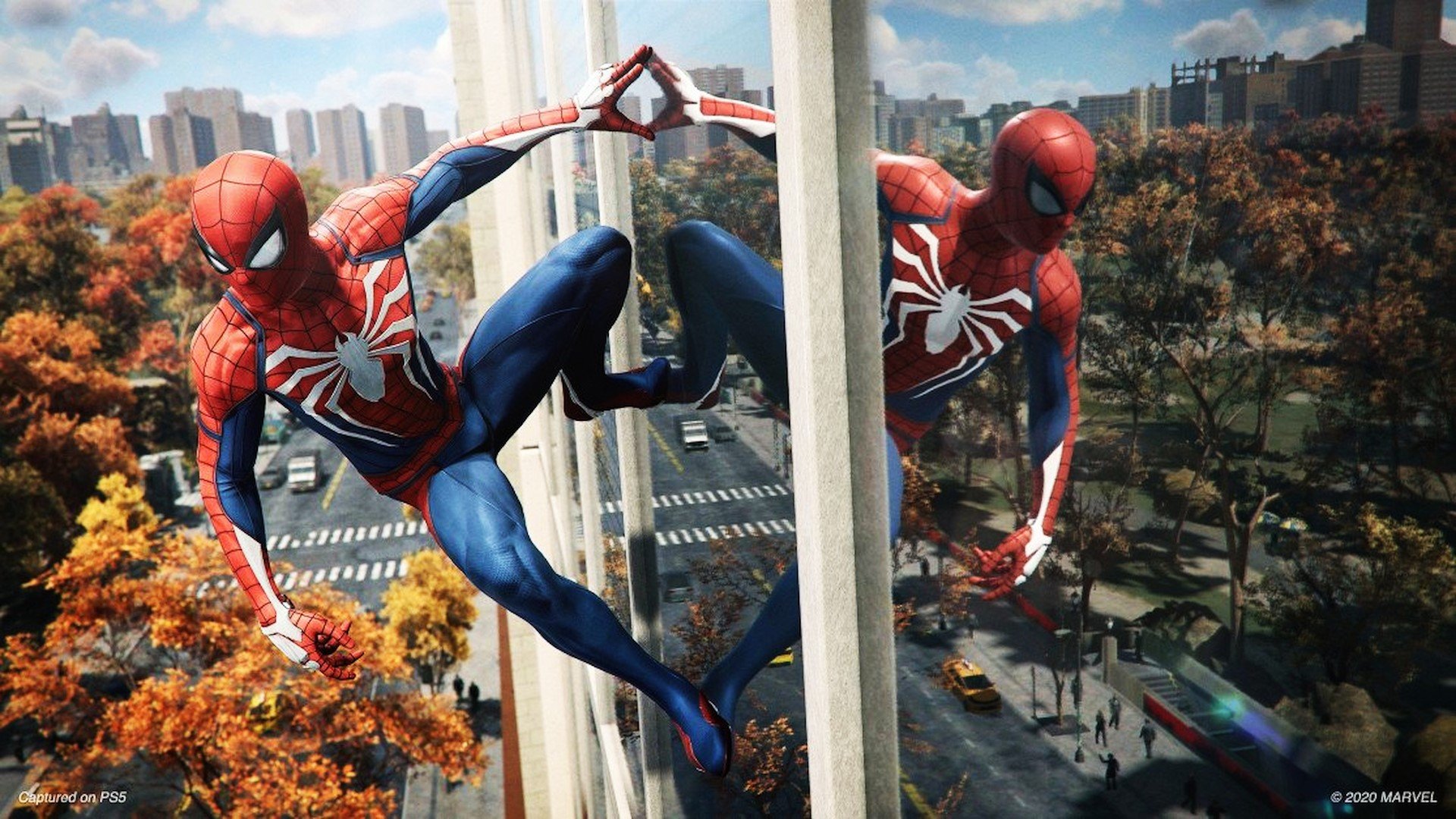 With the arrival of 2023, we are one step closer to Insomniac Games’ sequel Marvel’s Spider-Man 2. Though we’re still waiting for a release date, you can’t help but feel like the web-slinging action is just around the corner. Of course, this will include new missions, new villains such as Venom, who has already been confirmed, and a better, more expansive New York City to explore. One feature, we can’t wait to get our hands on is the new Spidey suits. That’s why we’re calming our excitement by ranking the ten best suits from the original Marvel’s Spider-Man.

If you played the first Marvel’s Spider-Man, you know the game included 28 suits (Before DLC content brought more). Of course, the game featured tons of classic suits from the original Spider-Man comics and movies. That’s why we can’t wait to see what’s up for grabs in Marvel’s Spider-Man 2. But for now, let’s recap the 10 best Spidey suits from Marvel’s Spider-Man at launch. And no, we thankfully did not include the “Undies” suit, which we are still questioning how it made its way into the game. 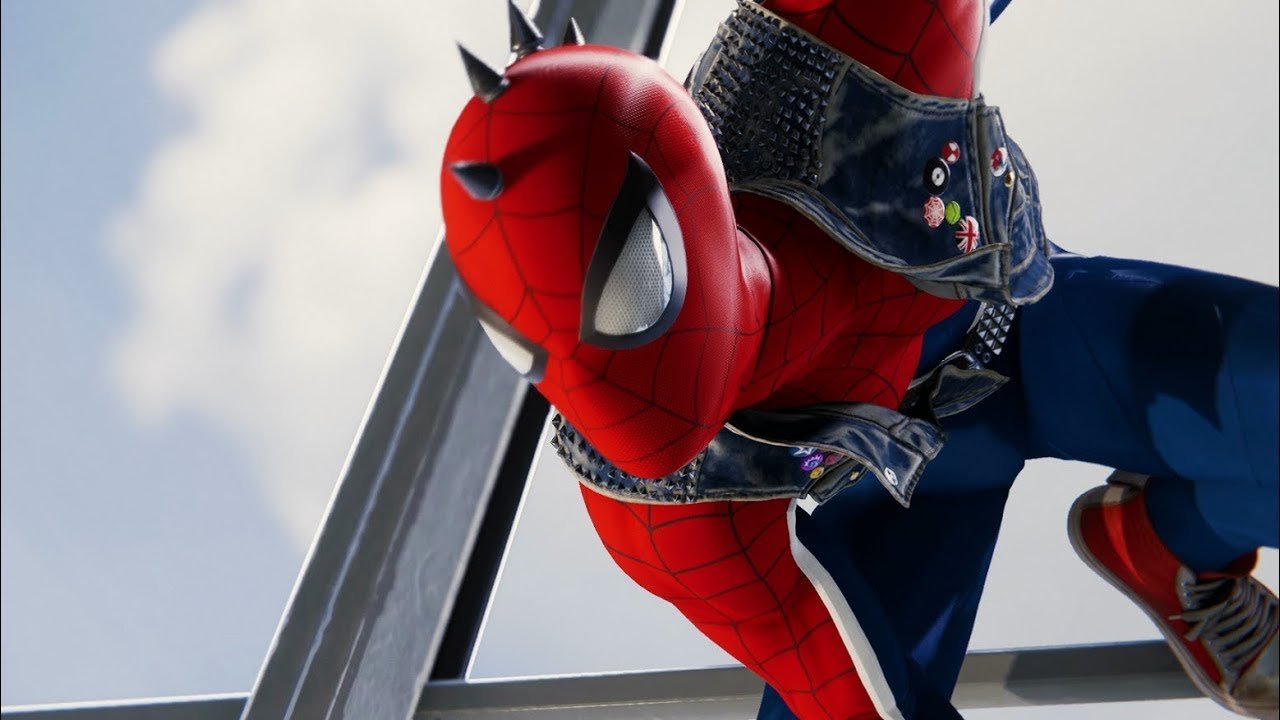 For the true “Masked Vigilante” Spider-Man players, the Punk Rock suit is a go-to choice. Though we never imagined seeing Spider-Man with spikes on his head and in a jean vest Nonetheless, it’s a rebel-esque look we can ride with. So, for the Punk Suit Spider-Man, we say rock on. 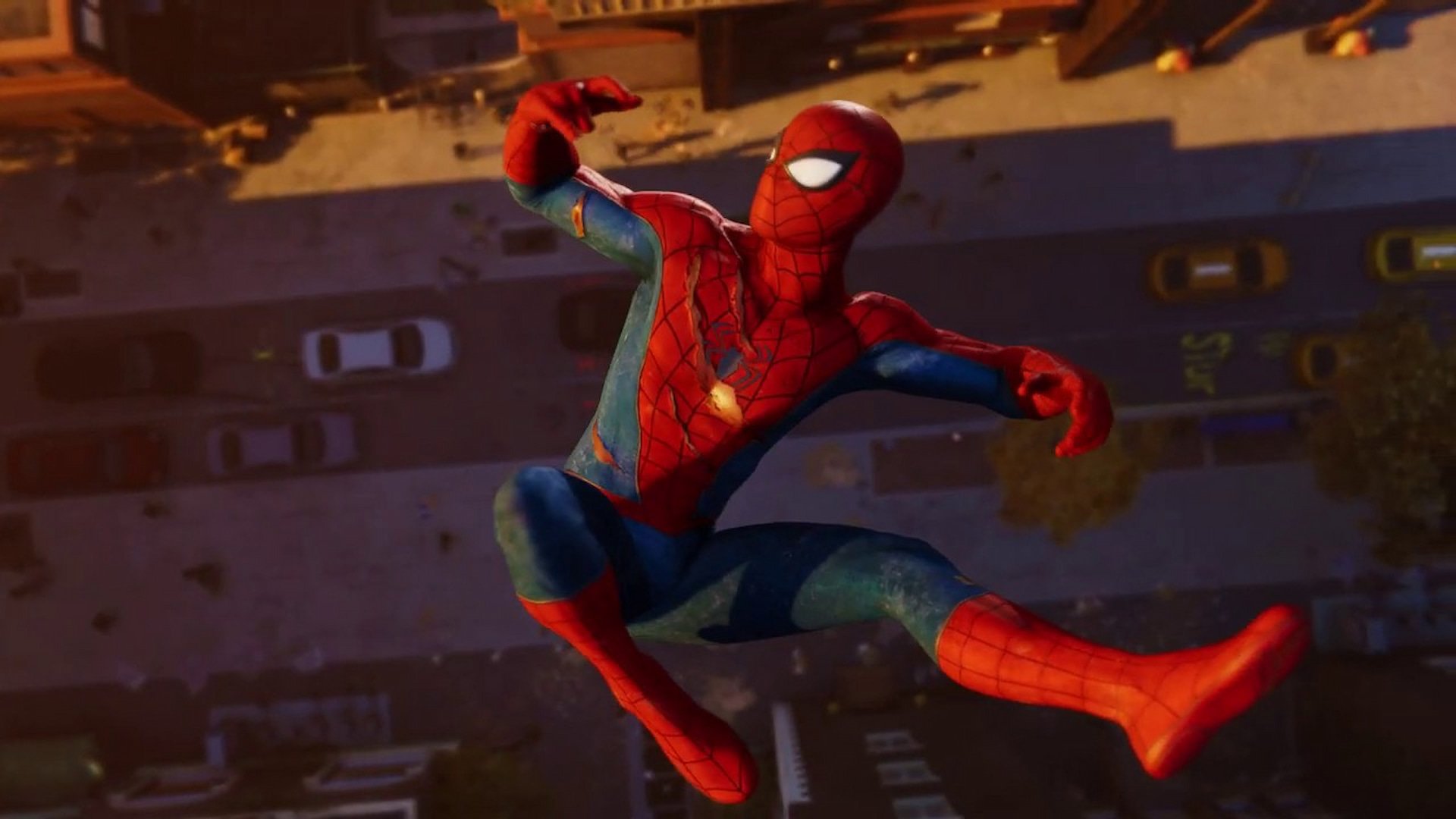 While the Amazing Spider-Man series was not everyone’s favorite film adaptation of the superhero, some of us enjoyed Andrew Garfield’s performance as Peter Parker. We for one vouch for his role as the masked vigilante. And, while the sequel was a flop, you have to admit that the first Amazing Spider-Man film was quite good. It was also the first time the “Lizard,” one of Spider-Man’s most famous villains appeared in the films.

This suit in Marvel’s Spider-Man is a reference to Andrew Garfield’s Amazing Spider-Man. In the first movie, our hero gets his suit ripped by the Lizard (Dr. Curtis Connors), which is the exact suit featured in the game. So, we consider it one of the best suits in the game due to its hidden reference. Spider-Man’s “Iron Spider Suit” was first featured in Infinity War, and it came in to quite literally save Peter Parker’s life in the film. It also called for an iconic line from the Spider-Man actor, Tom Holland, when he say’s “Mr. Stark it smells like a fresh car in here!” But why most players consider this one of the best suits in the game because it’s equipped with the iconic “Spider-legs”. We suspect that in Marvel’s Spider-Man 2, we’ll get more advanced options for how to use this feature along with this suit, which we can’t wait to use. Though the Anti OCK Suit is an original suit crafted for Marvel’s Spider-Man, we quite enjoy the concept. We never thought we’d see the web-slinging superhero in black and yellow, but evidently, he can pull it off. In actuality, this suit is meant to combat DR. Otto Octavious, as the suit is made from the same special material as Doc Ock’s robotic arms. Nonetheless, we see it as one of the sharpest-looking suits in the game. 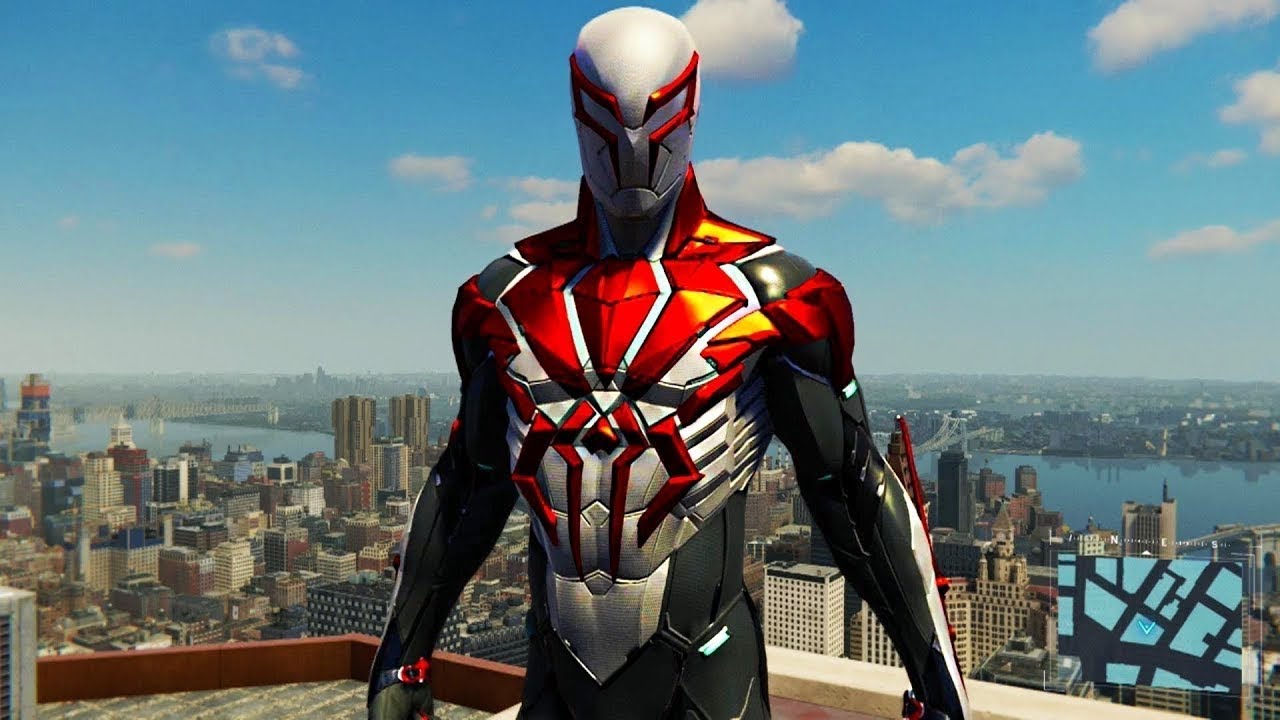 Though we prefer the Spider-Man 2099 White Suit over the black variant, both are very respectable choices. We not only say that because of the flair of each suit but also due to the fact that these suits are taken from the Spider-Man comics. If you couldn’t tell already, spidey suits derived from the original comics have easy access way to our hearts, and evidently why we consider most to be the best suits in the game. In Tom Hollands’ first solo movie as the superhero in Spider-Man Homecoming, we see him inevitably fall back to his homemade suit so he can come to his senses and realize it’s not the suit that makes him super. Needless to say, we’re a sucker for the high schoolers’ homemade suit. Though, Andrew Garfield may have done a bit better job at hand-crafting his homemade suit (Spandex, Spandex, and more Spandex). Regardless, we still give Tom Hollands’ suit credit for its originality.

Plus, hate them or love them, those glasses are a bug-eyed thing of beauty and another reason why we consider the Homemade suit, one of the best suits in the game. Though you may originally think the Spirit Spider is a nod to Nick Cage’s Ghost Rider, this suit is actually derived from the Spider-Man comics. It definitely stems closer to what we would expect to see from the villains of Spidey’s universe, such as Venom and Carnage, but nonetheless, it’s a tough suit to turn a blind eye to. With a skull mask (we hope it’s a mask) and blue flames burning from his head, this suit will have criminals running in the other direction before even thinking of picking a fight. 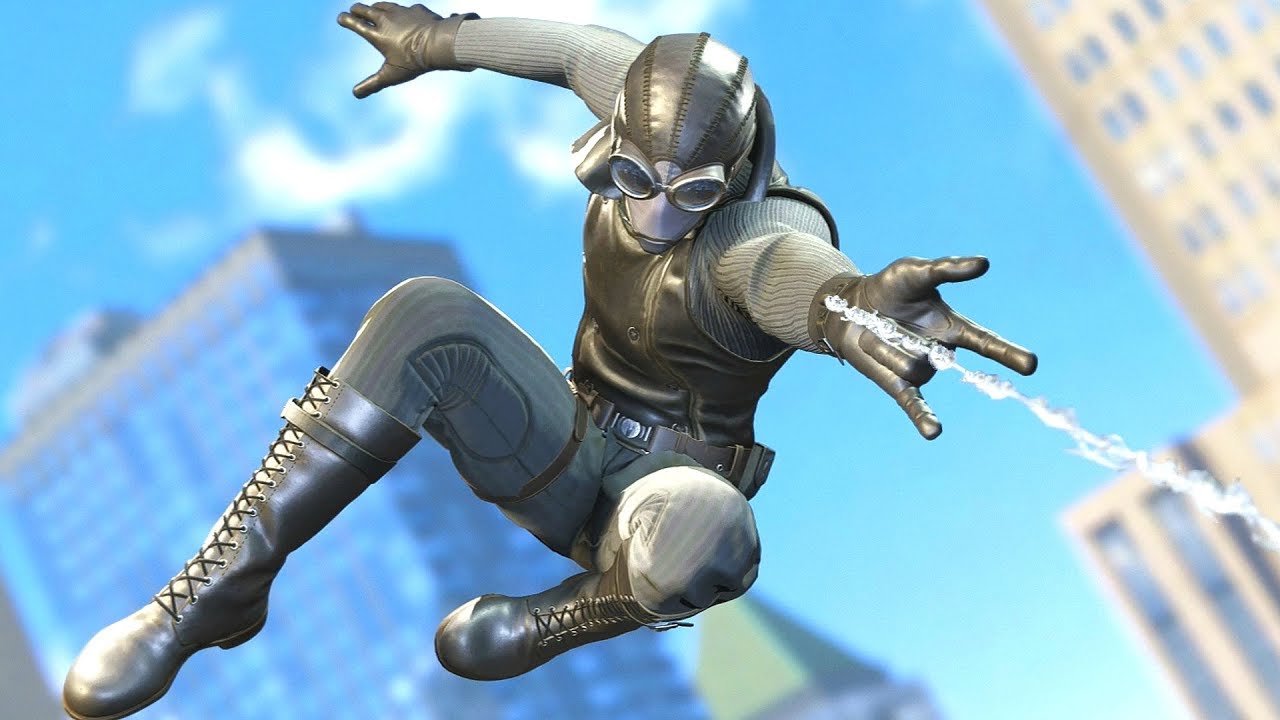 As an absolutely iconic suit and easy fan-favorite, Spidey’s Noir Suit is surely one of the best in the game. Taken straight from the Spider-Man Noir spin-off comics, this suit is a lover for those that like to lurk in the shadows. There have been many renditions of Spider-Mans Noir suit throughout the years. Including some with a cape and gun holsters (that’s right Noir Spider-Man gets pretty dark in this spin-off). Regardless of that fact, Marvel’s Spider-Man rendition of the Noir Suit is easily one of the best suits in the game. 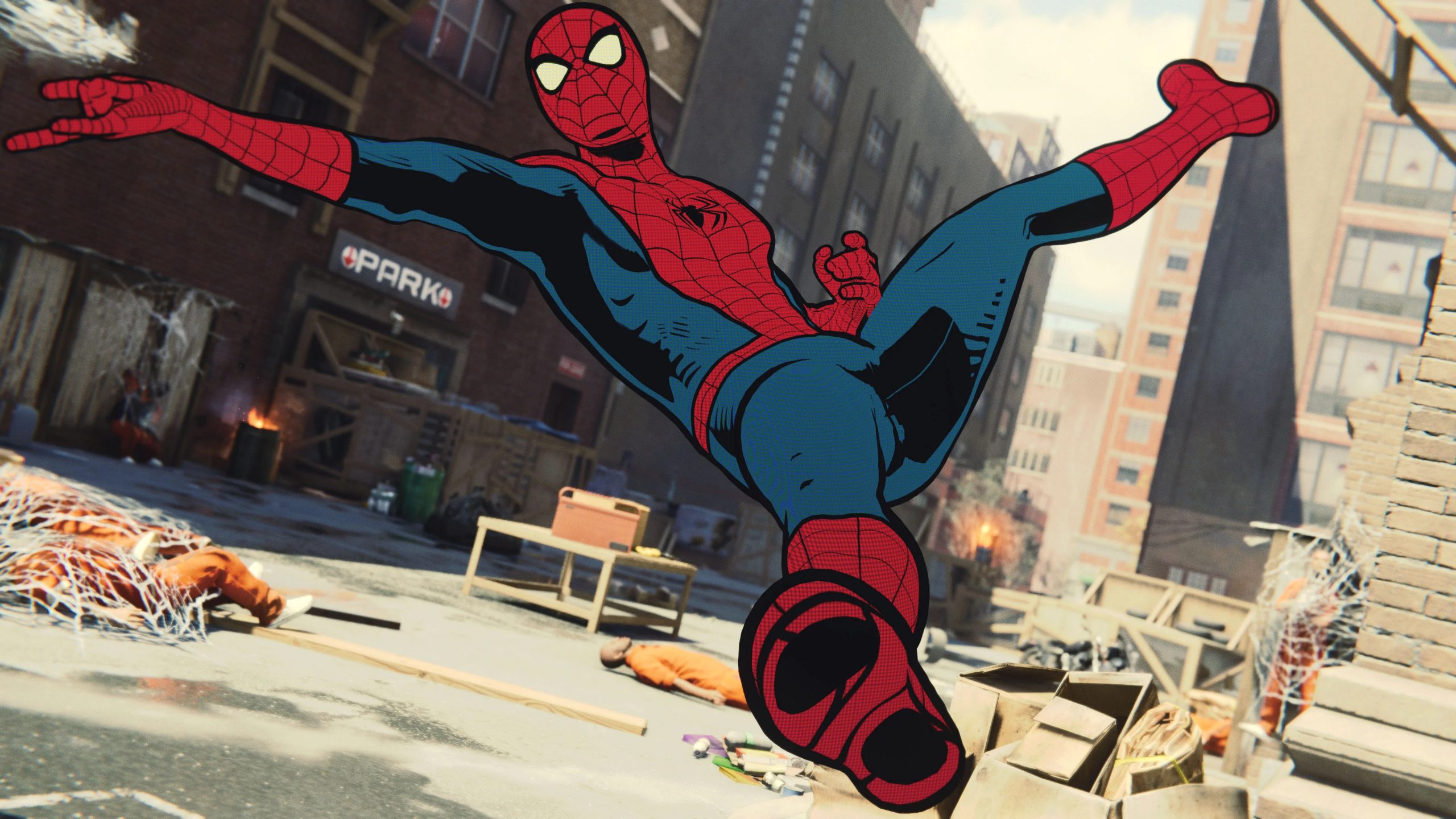 Cue up the original 1967 Spider-Man animated TV Series theme song, because our number suit in Marvel’s Spider-Man is the Vintage Comic Book Suit. In fact, this is the first suit Spider-Man was featured wearing in the first Spider-Man comic. Furthermore, it essentially laid the groundwork for all the suits that came after it. Due to that fact, it’s hard not to consider this one of the best suits in the game.

This suit can be hard to wear for long periods of time due to its animated style, which doesn’t line up with the graphics of the game. But if you played Marvel’s Spider-Man, you can’t deny repping this suit for a period of time. To add to that, most of us couldn’t wait to get our hands on it.

So, what’s your take? Do you agree with our top ten? Are there other suits you think are the best in the game? Let us know in the comments below or over on our socials here!