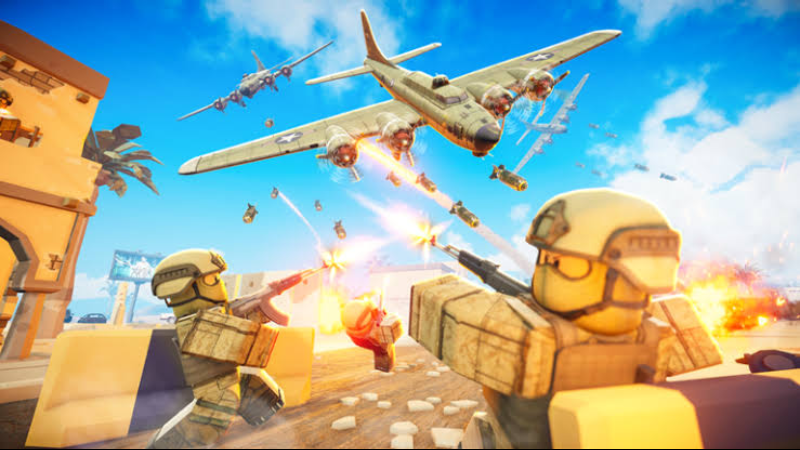 Military Tycoon is a 2021 military simulation on Roblox that lets you take the lead of your platoon and wage war against enemies. You get to choose which country to fight for and set up your base. The game has the thrill and heavy combat action you might expect in a warzone. The major difference is, of course, that it is a simulation. The exciting sensation of capturing fortresses and Islands does indeed pump up your adrenaline. Not to forget the emboldening moment of leading your team to victory.  If you’re a die-hard of the genre, Roblox has plenty of other exciting games for you. So here are the five best Roblox games, like Military Tycoon, that you should check out.

Armored Patrol is an epic military game developed in 2008 by Winman 8, the mastermind behind Galleons. It’s exponentially growing more popular by the day, with over 7.8 million visits and a 91% thumbs-up rate. The game features intense combat action with more focus on military vehicles. Players must join one of the two teams and conquer all bases by capturing the flags.

Unlike other games where you get heavy armor at your disposal, Armored Patrol allows you to steer yourself into action using military vehicles. However, Armored Patrol will enable you to run through the field and shoot down heavy artillery vehicles if you prefer on-foot combat. Your best choice of weapon, of course, should be grenades and rifles.

The game’s environment is a hilly area, complete with safe zones and bases to conquer. Through every round of the match, your driving skills will prove helpful when zoning in enemy bases, but be careful not to get too close, or you’ll easily get nuked. The tanks are ideally the best choice of weapon in the arsenal since they can deal more damage and take more hits. So if you’re looking for the perfect Robloxian warfare that matches up to Military Tycoon, you should check out this game.

Another highly sought-after game that you will undeniably relish is Phantom Forces. Developed by StyLis, the FPS game lets you choose between the two main factions, Phantoms and Ghosts. The two teams go head to head against each other in typical game modes such as King of the Hill and Deathmatch.

Like in every other shooter game, you start at the lowest rank with limited weaponry and rise the ranks to upgrade. The game features a massive load of weaponry, most of which will only be accessible after completing different levels. Alternatively, you can purchase them using your Roblox coins. Moreover, you can also get upgrades through loot or by winning matches.

Phantom Forces’ gameplay is a cross between Call of Duty and Battlefield owing to its spectacular combat engine and unique motion controls. The most exciting part is being able to customize your weapon to the supreme nuking machine and turn the tides of battle. So unleash your inner soldier with this acclaimed shooter game on Roblox.

An iconic recreation of WW2 battles and the invasion of Normandy in Omaha Beach, D-Day features the most intense and wildly unrealistic combat action in the Roblox platform. The game requires much dedication to learning the ropes once you start. However, it will be hard to stop once you start jumping the enemy like a pro.

D-Day is one of the exhilarating games on Roblox that will have you asking for more. You must improve your strategy and combat skills for a competitive edge against your opponents. Moreover, it instills the essential value of teamwork through every match.

Featuring push-and-hold gameplay, you’ll need to move forward by capturing points and maiming enemies on your way. Then you can force your opponents to acquire new spawns such as guns, tanks, or artillery. If you enjoyed Military Tycoon, D-Day has more in store for you.

If you had a chance to rewrite history, would you take it? Roblox offers you such an opportunity with its military games like Military Tycoon and Blood & Iron. Created by CoderQwerty, the game has over 50 million visits and an 86% thumbs-up rate. The game depicts historical Napoleonic factions by featuring the 95th Rifles and the Old Guard from Britain and France.

Blood & Iron has a knack for teamwork. Whether you’ll be conquering new borders, launching guerilla attacks, or setting up s00p stores, teamwork is undeniably the greatest weapon, aside from the sledgehammer. The game greatly rewards tactics and cooperation by adding strength to individual classes.

The game features different classes, such as the rifleman class, to take part in. The classes are designed to ensure that each player maximizes their skills and is duly rewarded. If you decide to venture into a new class, you’ll have to garner the right skills for it. It may help to have different class skills; however, it becomes a drawback when on the frontlines. For instance, as a rifleman, your position shouldn’t be too close to the front lines. Or else you’ll end up being overwhelmed and disadvantaged by your weapon’s long reloading time. Either way, this is a game worth your time.

Events in the Blackhawk Rescue Mission take place after two Blackhawks were hit while patrolling over the war in Mogadishu in 1993. The command rallies more forces to retrieve the fallen soldiers and sends them to the conflict zone. This is where the action begins.

If you’re looking for combat realism, you’ll be right at home with this game. From virus outbreaks to rescuing stranded survivors, the game gives you a life-like glimpse of what it looks and feels like to be at war. Blackhawk Rescue Mission is one of the underrated games on Roblox; however, it features impressive graphics and intense combat action gameplay.

And there you have it. Do you agree with our picks? Have you played any of these games, like Military Tycoon, before? Are there some games we still need to mention? Let us know over on our socials here or down in the comments below.