Another qualifying round for the third week of the Fortnite Champion Series has ended. The seven competitive regions had their results released. After three rounds of intense competition, the pairs begin to shape what will be the next few weeks. With only a week to go from the Fortnite Champion Series, it will be decided on the last battery of points.

With no apparent rule-breaking attacks this week, we saw one of the best teams in Europe claiming their first win at the FNCS. A West NA pair survived their relatively new East NA competition and Oceania continues to produce similar results week by week. You can consult the results of the second week for a complete list of qualified doubles up to that point. Now let’s dive deeply into the action of the third week of FNCS.

The duo Mitr0 and Crr took first place in the third week of the European Fortnite Champion Series. They won 43 points and won their first qualification for the FNCS qualifiers in two weeks. Even without any Victory Royale, Mitr0 and Crr made several eliminations, making a total difference. Each player took home $ 2.5K USD for their efforts in the finals. 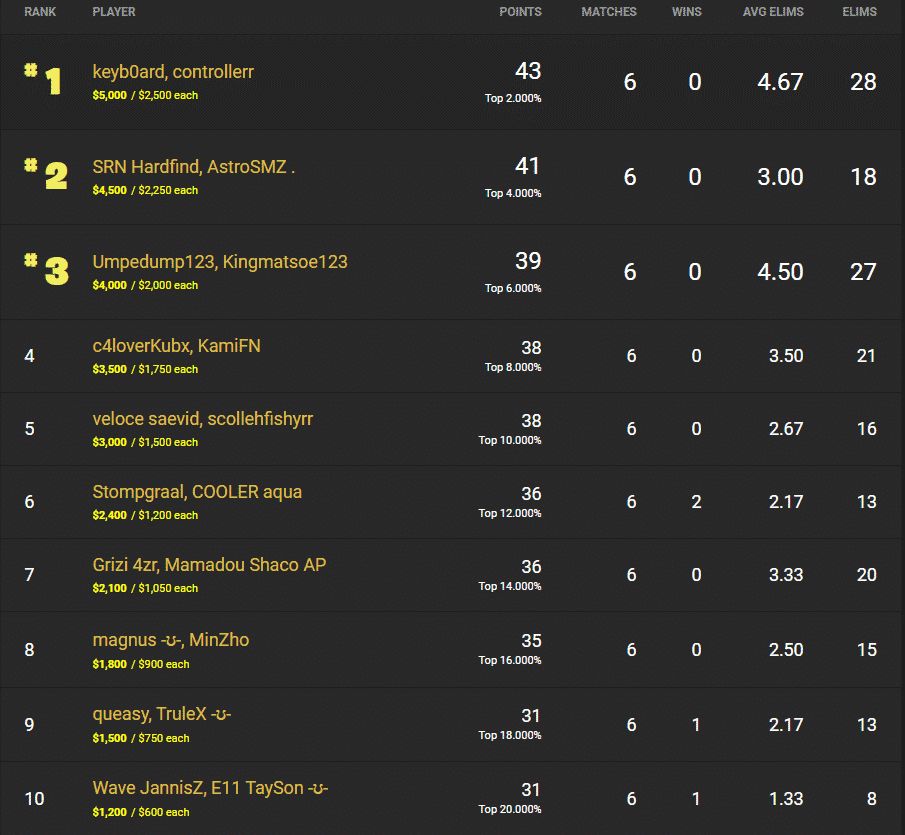 Results from Europe in the Fortnite Champion Series. (Image: Epic)

SRN Hardfind and AstroSMZ closely followed the winners with 41 points. The road to success was a little different, with just 18 eliminations. However, they consistently earned placement points and had only a worse finish than 15th place. This week marks his second qualifying for batteries. The pairs of Sy Kyzen and Sy Clement, c4loverKubx and KamiFN and MCES Andilex and LeStream Nayte won their third qualifying for drums, with a top 20 this week.

The incredible Cented and NRG Edgey showed off their talent in the third week of the Fortnite Champion Series with their first big win in eastern NA. Cented and Edgey will do well in the standings after getting 59 points and a Victory Royale. This pair finished in the top ten in just one game and took home $ 2.25K each and their third battery qualification. 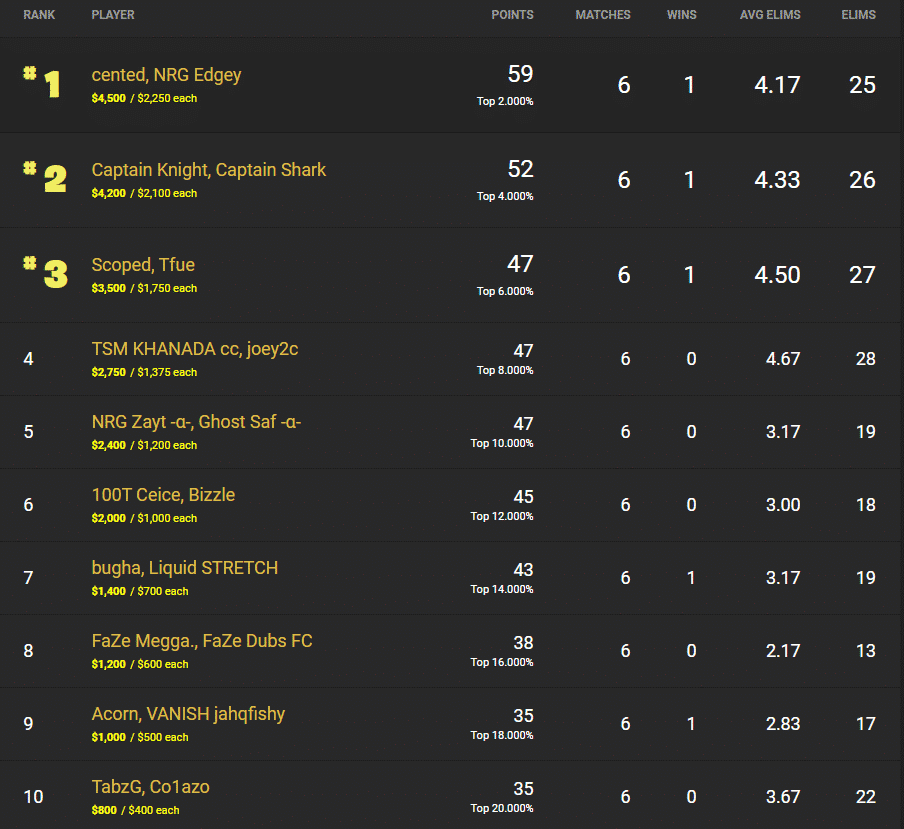 Results from NA in the Fortnite Champion Series. (Image: Epic)

Captain Knight and Captain Shark achieved another impressive result with a second result in the third week. They got 26 eliminations en route to 52 points in total. They will participate in sleeves and continue to impress each week.

Twitch star Tfue and controller spotlight Scoped followed the performance of first place in the semifinals, with third place in the final three of the week. After not qualifying for the finals in weeks one and two, Tfue and Scoped took off and decided to secure a spot in the heats. They did just that with 47 points and a Victory Royale. 100T Ceice and Bizzle join Edgey and Cented as the only two pairs to be in the top 20 in three weeks.

Powur and Favs added 50 points from six games and won the Fortnite Champion Series final three of the week. These two achieved more eliminations than any other duo and did not even need a Victory Royale to take first place. Favs and Powur were in the top ten in five of their six games, proving how much consistency counts in Fortnite. These two won a total of $ 3,000 for their efforts in the finals. 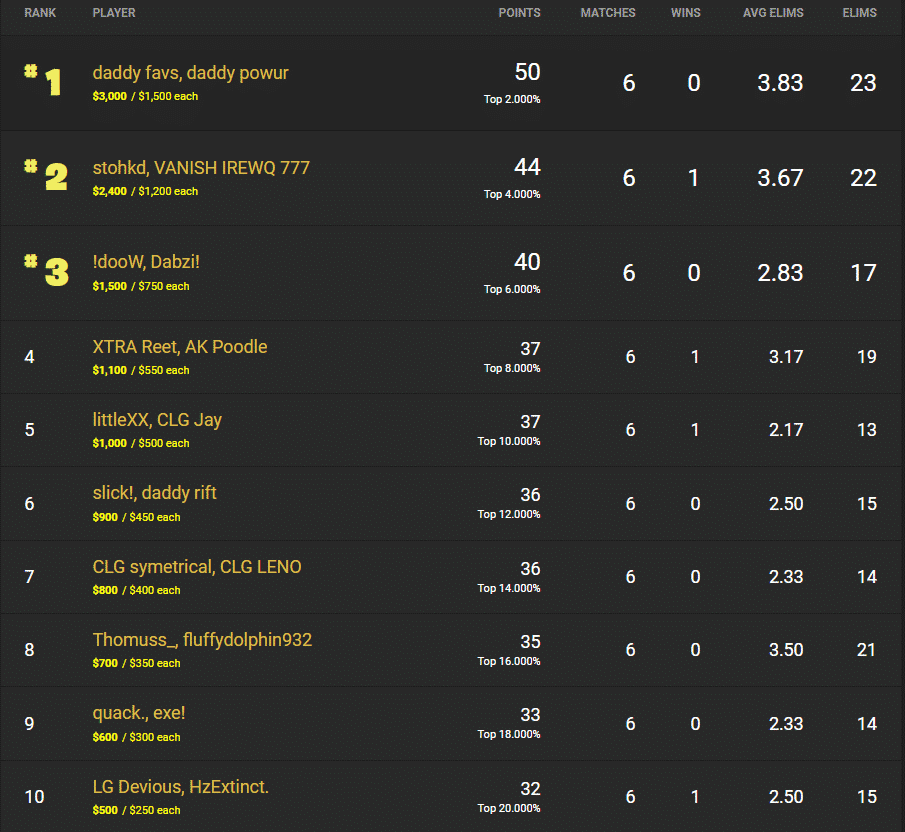 Stohkd and VANISH IREWQ were six points below the first, but ended up winning their first qualification, with a second place. In six matches, Stohkd and IREWQ achieved a Victory Royale and 22 eliminations in total. Several doubles, including Thomuss and wavyjacob, as well as CLG Symetrical and Leno, reached third place in this week’s top 20.

Jahlyn and Parpy won the tiebreaker and took first place in the third week of the Oceania Fortnite Champion Series. Despite combining points with the outstanding Gooboz and dignified, jahlyn and Parpy agreed with the eliminations, which yielded the victory. After qualifying last week, jahlyn and parpy celebrated their first win with 32 eliminations and 53 points. Gooboz and digno took second place for the second time in three weeks, each earning $ 400 USD and their second battery qualification. This week’s top ten players will also join Gooboz and will also be worthy of qualifiers. 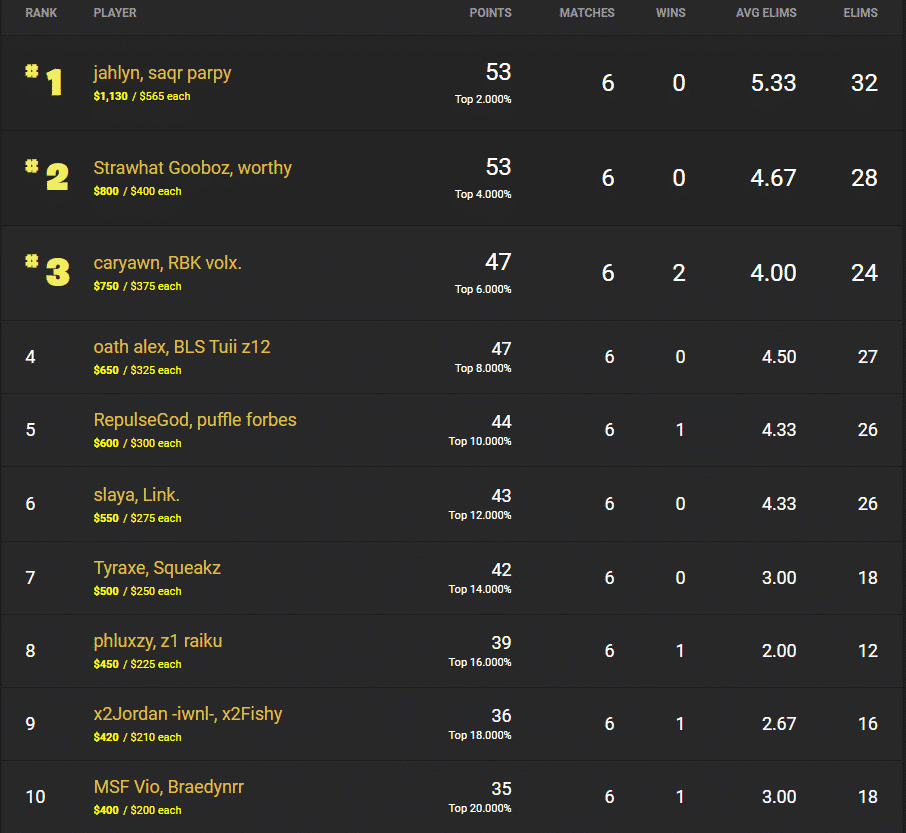 Results from Oceania in the Fortnite Champion Series. (Image: Epic)

R4J4DA and B4 TarzaN combined the OCE winners with 53 points to achieve victory in the region of Brazil. Despite falling slightly behind their competitors in the elimination column, R4J4DA and Tarzan had an average placement of 9.5 in six matches. Their consistent ability to earn placement points has elevated them above competitors. The two players raised $ 1,500 and will join the Brazil FNCS Qualifiers in two weeks. 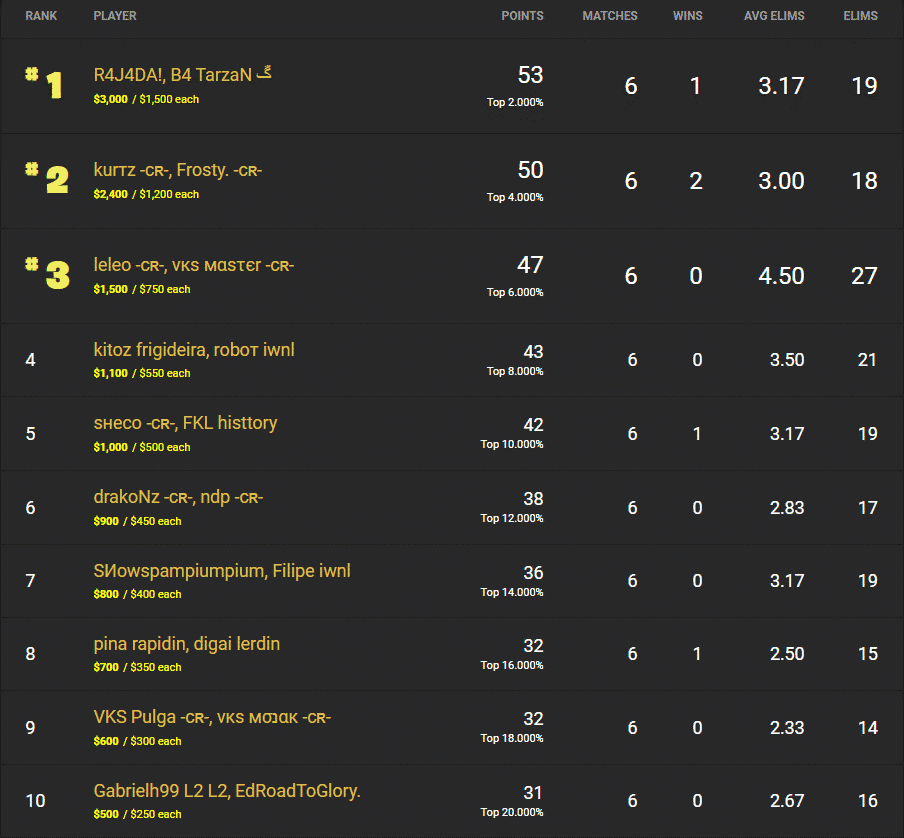 Results from Brazil in the Fortnite Champion Series. (Image: Epic)

After finishing in fifth place last week, Maufin and Bob added an impressive 65 points to win their second qualification in the Asian FNCS Heats qualifiers. Their display included only 28 eliminations, but the two finished no less than 12th in their six matches. With an average placement of 6th, Maufin and Bob did not need a significant amount of eliminations to win. Peterpan and FaxFox, three heats, came in second, while conducting a clinic with 43 eliminations. This week’s top ten players will advance to the next round. 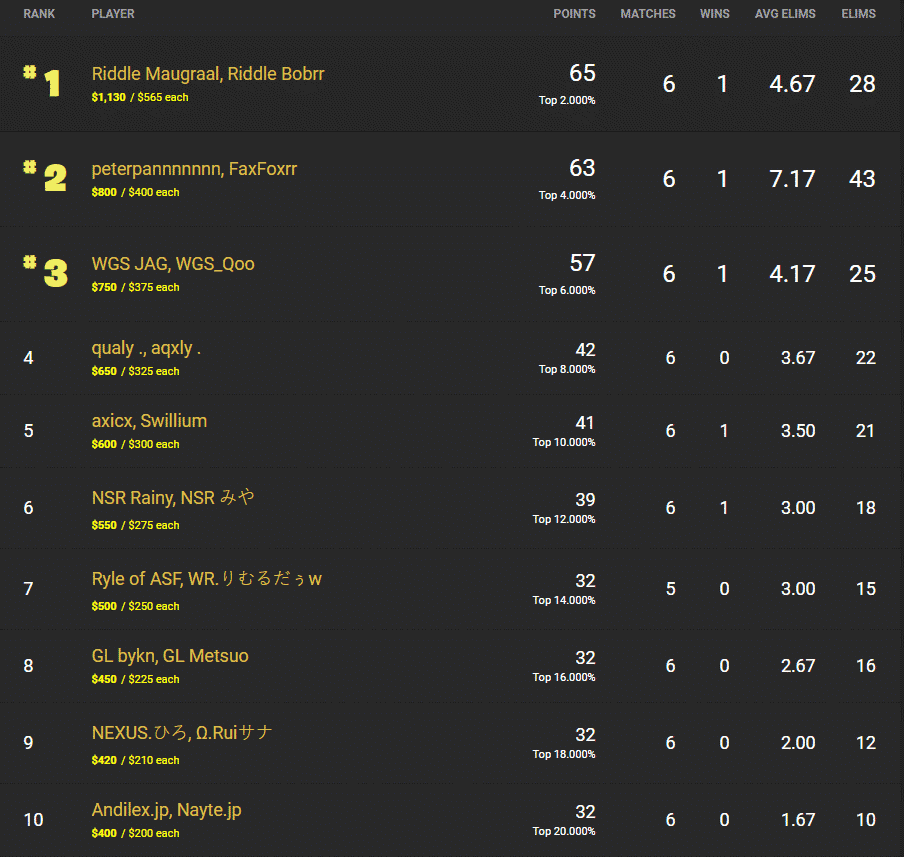 Results from Asia in the Fortnite Champion Series. (Image: Epic)

Spread the love
Related Topics:FortniteFortnite Champion Series
Up Next

Fortnite: the best free agents from the competitive

Fortnite: why are the pros making it competitive? Ninja and SypherPK explain.