The presence of Open Qualifiers is undoubtedly the most exciting feature of this Cash Cup. The first competition guides presented a Duo and Solo Cash Cup, containing two rounds per week. The first round of the Duo Cash Cup will have the top 200 to qualify for the second round. Duos will only win cash prizes if they reach the second round and finish in the top 25. The new format will reward consistency and smart play. Before, he rewarded the teams that were in “bot lobbies” and thus accumulated a huge amount of eliminations.

The Solo Cash Cups that advance to the second and last round, will be 100, will compete for prizes. These two new formats will ensure that the best players are competing in the final tournament session each week. Cash Cups are getting closer to real tournaments as a result. 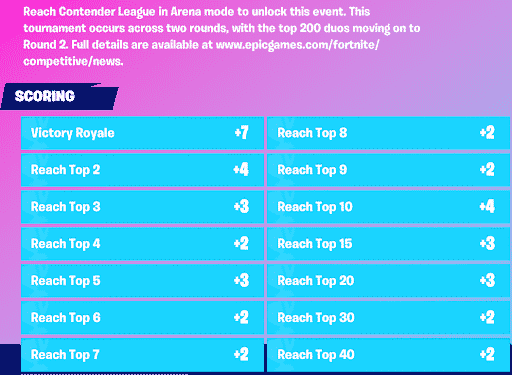 As of April 30, a new scoring system will take effect. The TOP 40 Duos will start accumulating points. These points vary, but the Victory Royale is worth seven additional points. The winning pair per game will earn 41 points in total and four points for elimination. It is very different than before, where the doubles already guaranteed a point for elimination and the placement points started at TOP 15. Epic Games is testing a few different scoring systems, so you can see which one will work best with the Duo Cash Cups.

Epic Games has always been heavily criticized for its approaches to Fortnite Competitive. Cash Cups were clearly not ideas in the previous format. In addition, the lack of communication with competitive players caused a significant reaction from the collective community. The step in the right direction was the application of this new scoring format system. Players are looking forward to competitive cash cup tournaments. The 200 pairs and the 100 best solos each week will be some of the best in each region, which will result in exceptional content. Cash Cup prizes have not increased, but do not need the redesigned FNCS Invitational and weekly Cups.

Update: Sony Has Identified Leakers of The Last of Us Part 2