World of Warcraft Shadowlands is the new expansion of the popular Blizzard MMORPG that arrives on November 23rd. Announced during BlizzCon 2019, the release adds several new features to the game, with changes to its storyline, mechanics and features.

Among its main highlights are the reduction of the maximum level to 60. A new dungeon changeable by instances and a new character progression system, which works through Pacts and guarantees new skills and exclusive rewards. Check out everything about the new expansion of World of Warcraft from Gaming Net below.

What is World of Warcraft?

In World of Warcraft, each player’s character has a specific range of talents and abilities that define their role. For example, Mages are powerful spellcasters who use magic to damage enemies from a distance. But they are very vulnerable to attacks. These characteristics define the role of a mage: Fight from a distance, deal great damage, and wait for enemies to be killed before they get close. 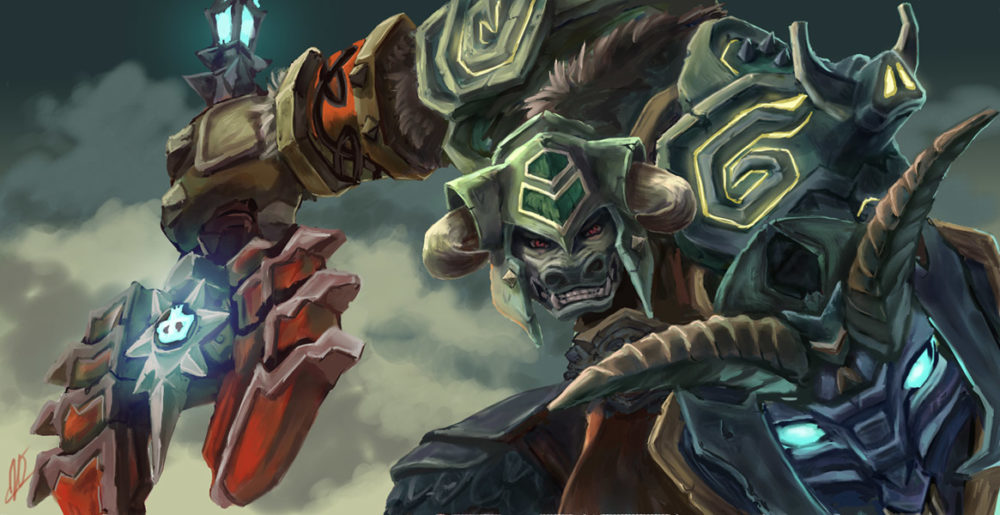 Tank is one of the playable classes in World of Warcraft. (Image: Blizzard)

In the context of a group, there are 3 main roles: Tank, Damage, and Healer. A Warrior can choose to serve as a formidable tank, or protector. Tanks are resilient, and your job is to catch the enemies’ attention and keep them at a distance from the most vulnerable members of the group. Mages are excellent for causing damage. A Priest specializing in healing powers may not do as much damage as other classes, but they can play a vital role in keeping the group alive through healing magic. It is important to note that all classes, regardless of the role they play, are able to play alone. Some classes are limited in the type of role they can play: Warlocks and Rogues are only damage makers. Some classes, such as Druid, can fill all three types of roles.

What is World of Warcraft Shadowlands?

World of Warcraft Shadowlands is the eighth expansion of the game. Its plot takes place shortly after the Battle for Azeroth events, when Sylvanas destroys the Helm of Domination, and the barriers between Azeroth and the Shadowlands are broken down. In this realm of infinite afterlife, players will unravel the fate of Warcraft legends and will be able to ally themselves with one of the four ruling Pact of the Dark Lands to face an evil threat.

The Dark Lands will be a new supernatural world divided into five areas. The Bastion, Ardena, Maldraxxus, Revendreth and The Gor. There is also a new Players Center called Oribos. It will be possible to trade in Ânima, a substance from this world that can be used as a currency or source of energy.

When is the launch?

World of Warcraft Shadowlands will be released on November 23. Originally, the release of Shadowlands was scheduled for late October. But after receiving feedback from the beta, Blizzard Entertainment preferred to postpone the date to make some adjustments and polish. That way, the developer can guarantee an epic experience for players since the expansion’s debut.

What platforms is it available on?

As with the base game, World of Warcraft Shadowlands will be released for the computer only. The expansion is now available for pre-order on the game’s official website, in three editions.

The Base Edition includes the Anciente Wanderer mount and early access to the Death Knights of the Allied Races and pandaren. The Heroic Edition, on the other hand, has the rewards of the Base Edition, with the addition of an instant access to a Character Upgrade to Level 120 and the flying Serpent Hunted flying mount. There is also the Epic Edition, with all the rewards of the Heroic Edition, 30 days of play, the mascot Morelita de Âima, a Return Stone with the effect of the Eternal Traveler and the cosmetic effect of weapons Illusion: Spectral Cold. 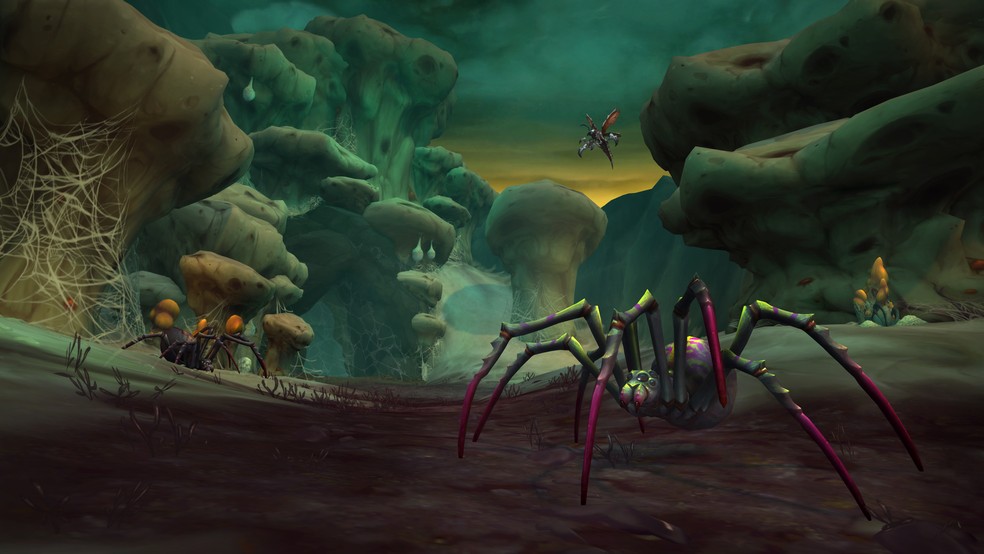 Buyers of the Epic and Heroic editions can take on the Eternal Traveler’s Vestment mission with the Sorceress Serpentine mount. While those who buy the Base Edition should look for players who have the editions mentioned above in order to start the mission. To play, you will need the base game of World of Warcraft, as well as registration on Battle.net. It is also necessary to download the Battle.net application from Blizzard.

The new maximum level will be 60

Unlike previous expansions, Shadowlands will reduce the current maximum level from 120 to 60. The change in the evolution curve was made in order to make each level increase more significant. Offering players more powers and abilities.

For newly created characters from level 1 to 10, there is a new starter zone that shows how the game’s combat and quest system works in a much more intuitive way. Upon reaching level 10, you will be able to choose between the Battle for Azeroth or Mists of Pandaria expansions to go your way. In addition, when the user reaches level 50, they can finally venture into Shadowlands. 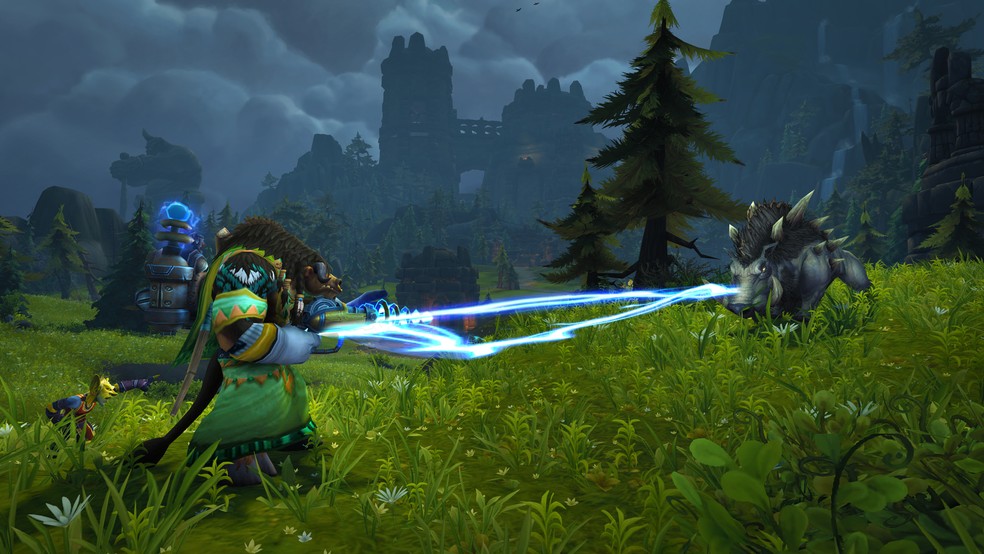 World of Warcraft Shadowlands will have adjustments to the character experience curve. (Image: Blizzard)

Players who are already at level 120 will start Shadowlands at level 50, and must also grind the final 10 levels in order to perform the conversion. With this new evolution system, it will be much faster to go from level 1 to 50. The path between levels 50 and 60, however, will be much longer.

What are the Covenants?

Another great new feature of Shadowlands is the introduction of the Pacts. Each of the Shadowlands zones will be governed by a special purpose Pact. Upon completing the main expansion campaign and reaching the maximum level, the player will be able to join one of these Pacts to do their quests and earn unique rewards. Like mounts, armor sets, cosmetics and two special abilities. 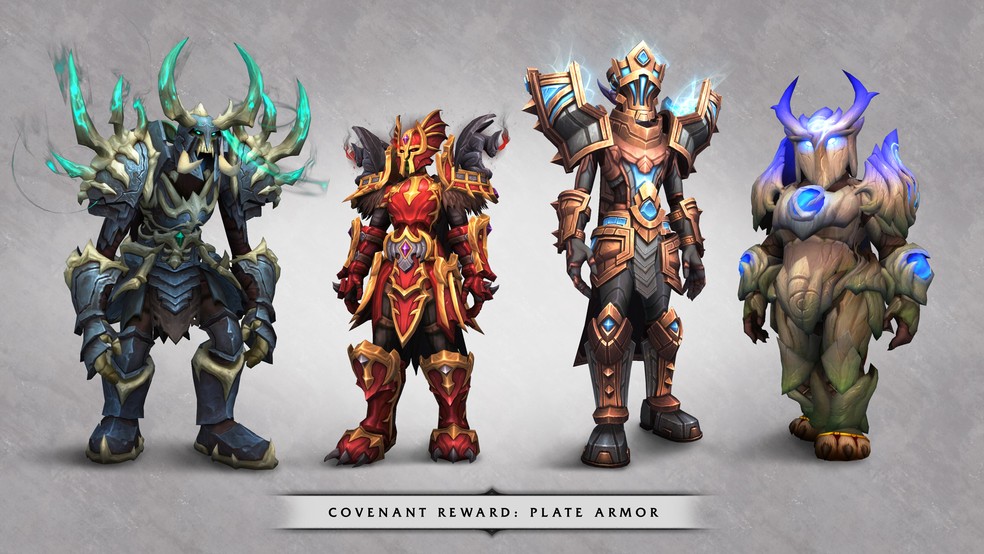 Each Shadowlands Pact will give you a different set of armor. (Image: Blizzard)

Unlike the factions, the Pact does not have to be permanent. If he prefers, the player may leave one Pact and enter another. However, it is important to emphasize that, when leaving one of the affiliations, it will be difficult to be able to return. Therefore, it is recommended to do a thorough research on each Pact before joining them.

With the launch of the expansion, new character customization options also arrive. Now, when creating a new character, you will be able to choose between different skin tones and ethnic characteristics. As well as hairstyles, earrings and more. Players who already have characters created and want to renew their look can visit the disturbing-looking in Oribos, or the barbershop in Azeroth. 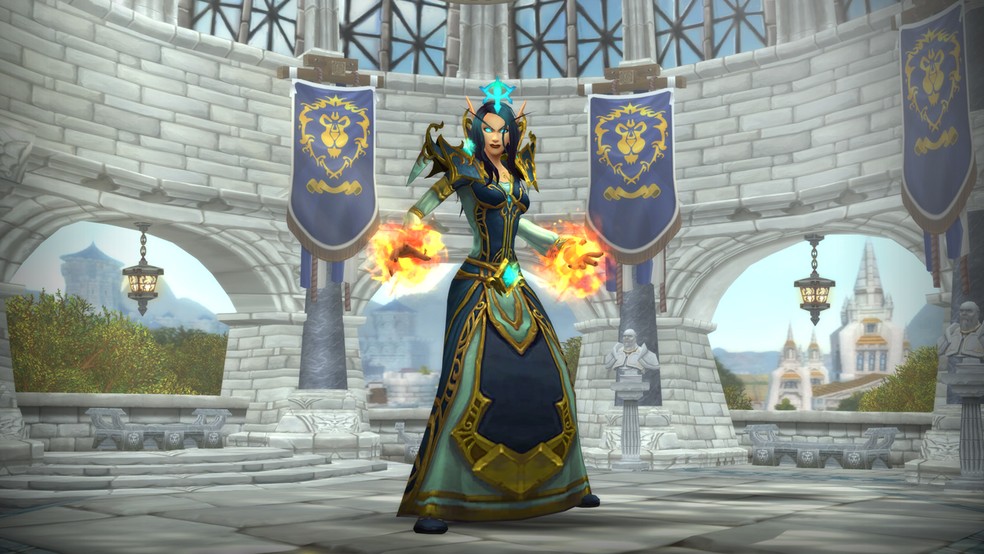 World of Wacraft’s character creation mode will now have many more options with the Shadowlands expansion. (Image: Blizzard)

In addition, all races will now be able to opt for the Death Knight class. Previously only available to those that already existed at the launch of the Wrath of the Lich King expansion.

What Comes After Is An Introspective Indie Adventure Of The Afterlife