Riot Games is responsible for one of the biggest games in the world, the MOBA League of Legends. Now, the developer has decided to venture into the world of free to play FPS. This year, with the launch of Valorant. The game is very similar to Counter-Strike: Global Offensive (CS: GO). This is one of the biggest hits of the genre and the eSports scene. The game has several weapons and maps, numerous characters and abilities as well. 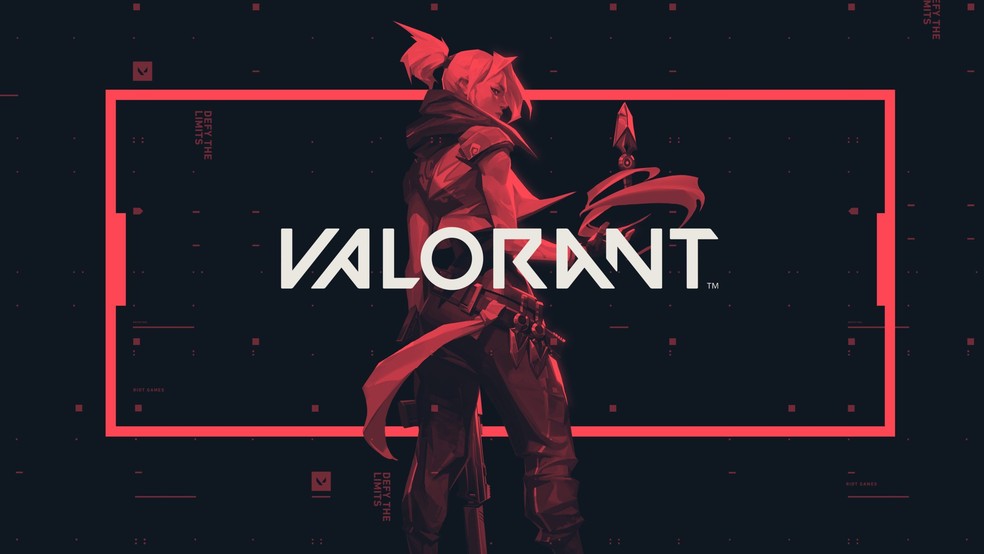 After a period of Closed Beta, Valorant has definitely arrived and is available free of charge for PC. Right at launch, the game received another agent, and a new map, Ascent, set in Italy. With more and more details to learn about FPS, check out a guide with the main information about this Riot Games bet that is already a success.

Valorant is a 5×5 tactical FPS that aims to plant or disarm Spike. Players have only one life per round and the match is won by the team that wins 13 rounds (out of 25) first. In all matches, teams must defend and attack. The attacking team must escort the bomb so that it is planted and detonated at points A, B or C on the map. If the bomb is not defused in time by the defending team, the attacking team wins.

More than weapons and ammunition, Valorant includes agents with versatile, fast and lethal resources. At the beginning of each round, the user can buy weapons and skills by pressing B. Every time the player survives one round, he can go to the next one taking his unused items. 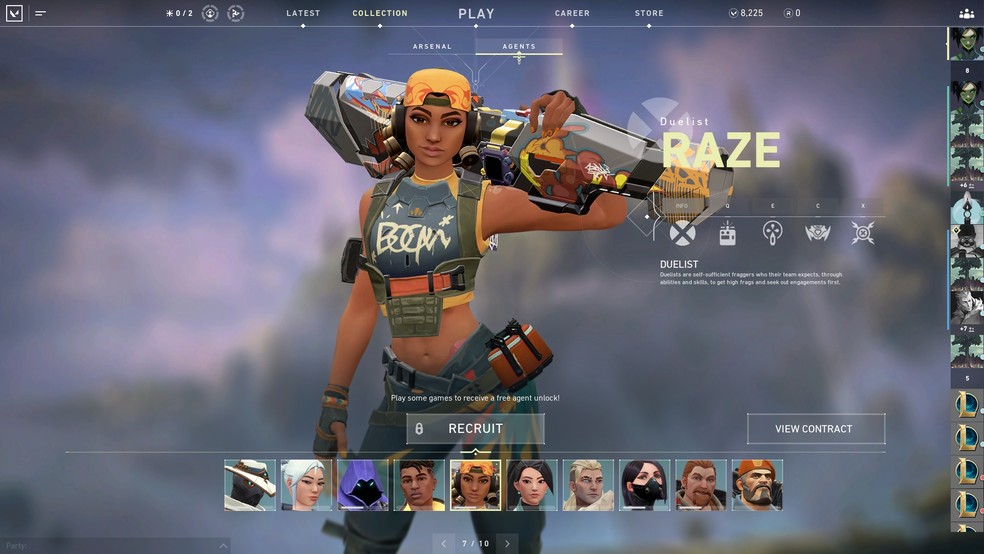 Raze is one of the characters in the game. (Image: Valorant)

Representing Brazil, duelist Raze is able to install and detonate an Explosive Charge (Q). Firing a grenade that splits into smaller bombs (E). And launch a robot (C) that aims and chases any opponent it finds ahead. Ultimate Spoiler-Delivers releases a devastating missile that does extremely high damage to any contact. 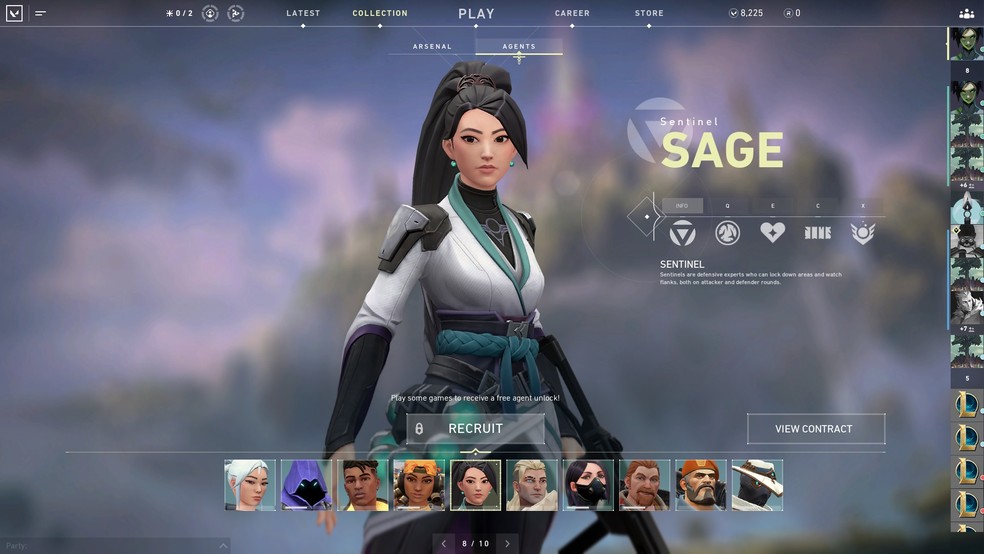 Sage is one of the characters in the game. (Image: Valorant)

China’s sentry Sage releases different orbs, each with a skill. The Barrier Orb (C) creates a wall that can be used to block the view and passage of players. The Slowness (Q) slows characters and the Bandage (E), as the name says, can heal allies and the agent itself. Resurrection, Ultimate of Sage (X), brings a dead ally back to life. 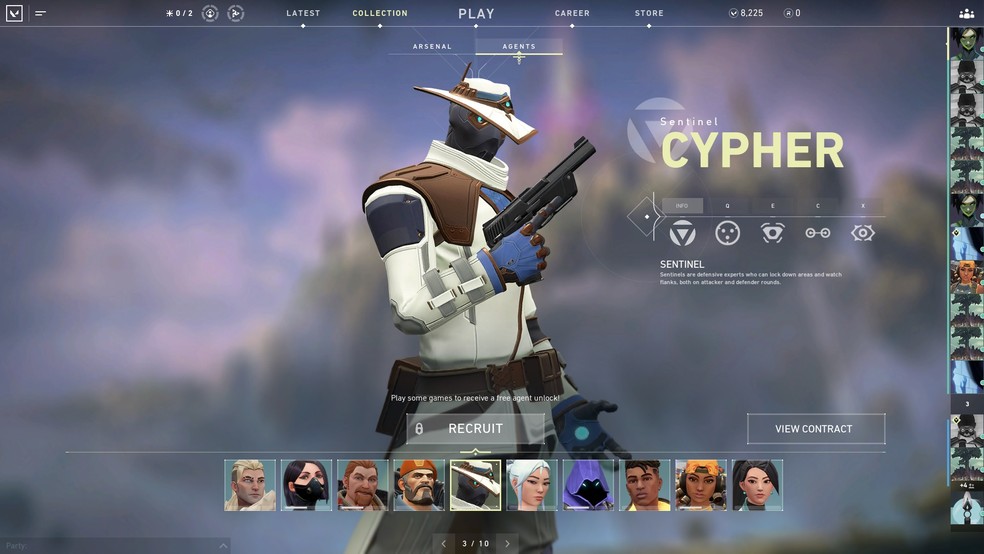 Cypher is one of the characters in the game. (Image: Valorant)

Another sentinel, Moroccan Chyper is the expert on intelligence and data collection. To do this, he uses his Surveillance Camera (E), which can mark enemies with a dart and reveal their position. His Ultimate (X), called Neural Assault, which reveals the position of all opponents still alive. The other two skills of the agent, the Wire-Trap (C) and the Cyber Cage (Q), have the power to immobilize, block vision and cause slowness, making life difficult for opponents. 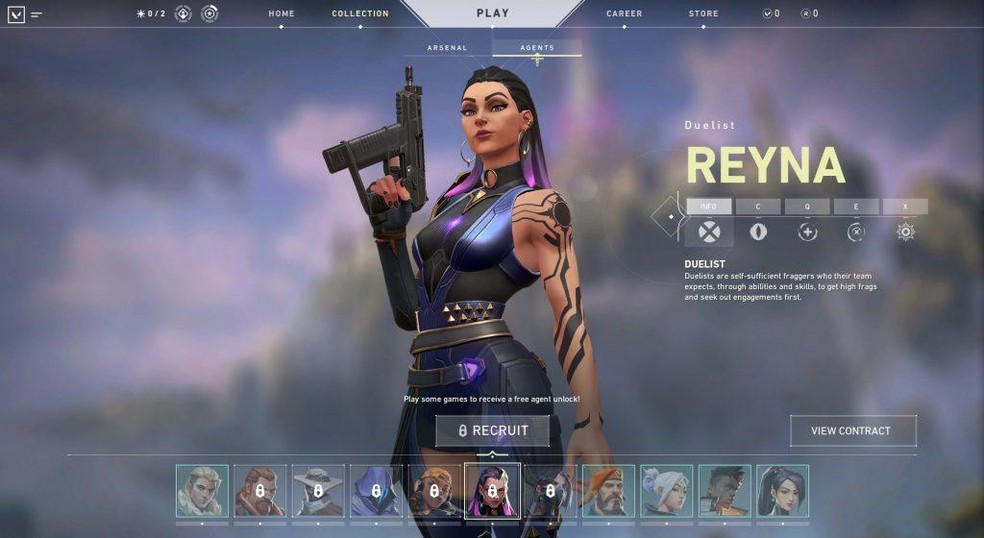 Reyna is one of the characters in the game. (Image: Valorant)

Mexican duelist Reyna has two abilities that require the Soul Orbs, which only appear when the agent kills an enemy. Devour (Q) and Scatter (E). The first can regenerate the life of the agent. The second, in turn, makes the character invulnerable. Reyna’s third ability, the Voracious Look, is able to blind her opponents (C). While the Ultimate Imperatriz improves the duelist’s skills, in addition to buffing Devorar (Q) and Scatter (E). Reyna begins to heal with each slaughter and invulnerability becomes invisibility. 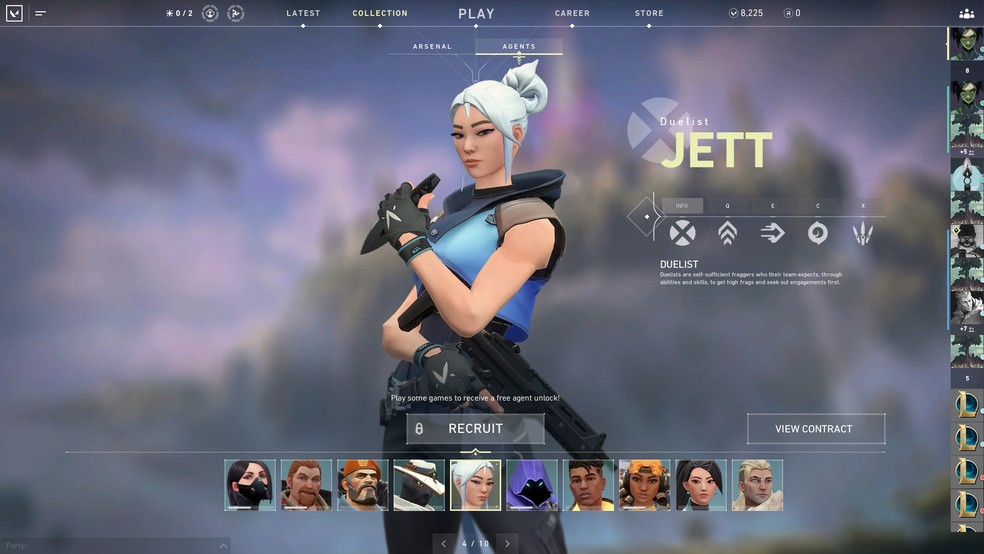 Jett is one of the characters in the game. (Image: Valorant)

Jet is a representative duelist from South Korea. She has two movement skills, the Impulse Breeze (E), capable of propelling Jett quickly in any direction. The Upward Current (Q), a vertical high jump. The duelist’s third ability is the Eruption of Mists (C), a smoke screen that limits the field of view on the map for a brief amount of time. Jett also has a passive, which makes the character soar when the player holds the jump button. An Ultimate, the Steel Storm (X), a set of five sharp knives. Learn how to play Jett better. 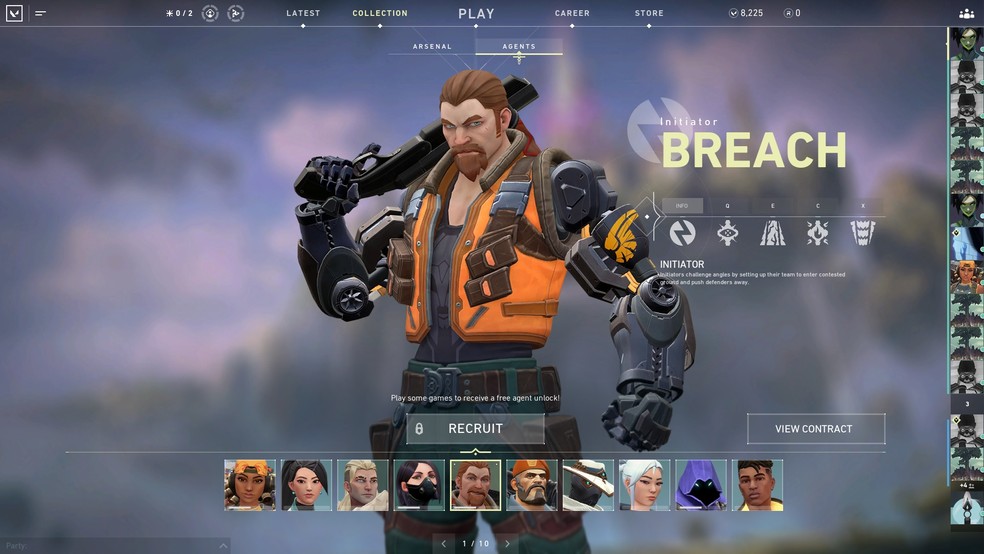 Breach is one of the characters in the game. (Image: Valorant)

The Breach initiator from Sweden is capable of firing a fusion charge that causes damage (Post-Shock, C). A charge that blinds all players who are looking at it (Flash Point, Q). The character is also capable of starting a common earthquake (Tectonic Fault, E). One maximized, cascading across the terrain, which advances continuously (Ultimate, X). 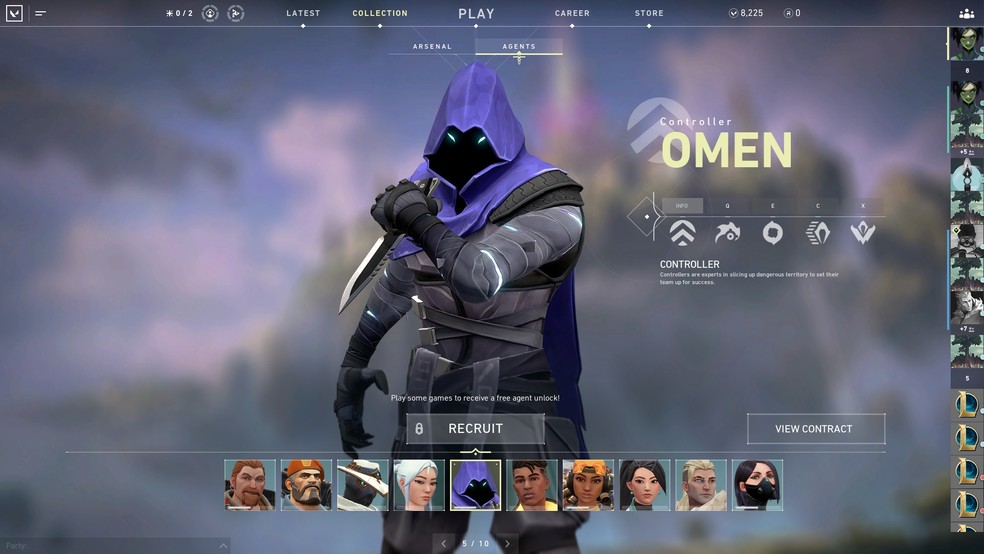 Omen is one of the characters in the game. (Image: Valorant)

Omen is a mysterious controller. Without nationality, he can use his skills to teleport from place to place nearby (Dark Pass, C). Issue a projectile that reduces the vision of the players (Paranoia, Q). Create a dark sphere that also prevents opponents from seeing (Dark Cloak, E). Omen’s Ultimate, the Leap of Shadows (X), causes him to teleport anywhere on the map in Valorant. 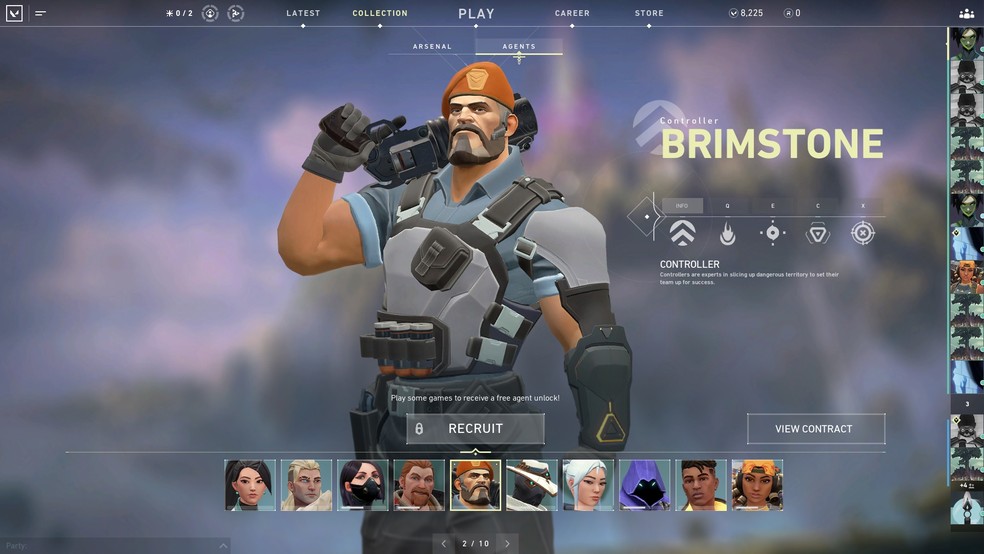 Brimstone is one of the characters in the game. (Image: Valorant)

Coming directly from the United States, Brimstone is a controlling character. It can launch incendiary grenades (Q) and, with the Sky Smoke (E), create long-lasting clouds of smoke that block vision in a selected area. The Stimulating Beacon (C) grants quick shot to players and its Ultimate, Orbital Attack (X), launches a laser coming directly from the sky, causing great damage to players hit by it. 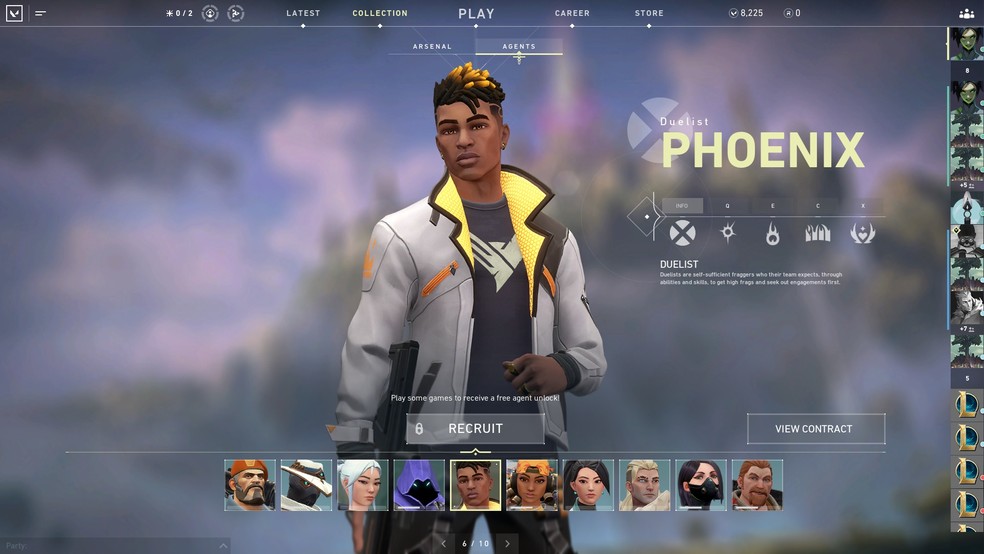 Phoenix is one of the characters in the game. (Image: Valorant)

Representative of the United Kingdom, the duelist Phoenix uses fire techniques as skills. With Flame (C), the agent is able to create a wall of fire that blocks vision and causes damage to anyone trying to cross it. Hot hands (E) also do damage, the Curved Ball (Q) blinds players and Ultimate Rebirth (X) brings the agent back to life. 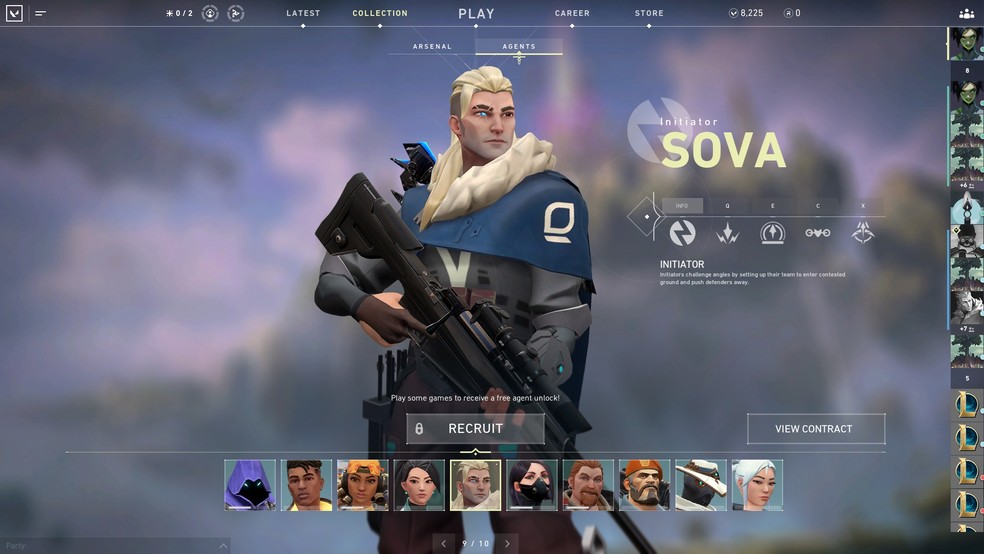 Sova is one of the characters in the game. (Image: Valorant)

Russian initiator Sova is also great for collecting crucial information for your team during the match. The Owl Drone is capable (C) of throwing darts that mark players and reveal their position. While the Tracking Arrow (E) is activated on impact and reveals the location of enemies in your line of sight. The Shock Arrow (Q) explodes on impact and the Hunter’s Fury (X). Your Ultimate, fires an arrow of energy that deals damage and reveals the location of your opponents. 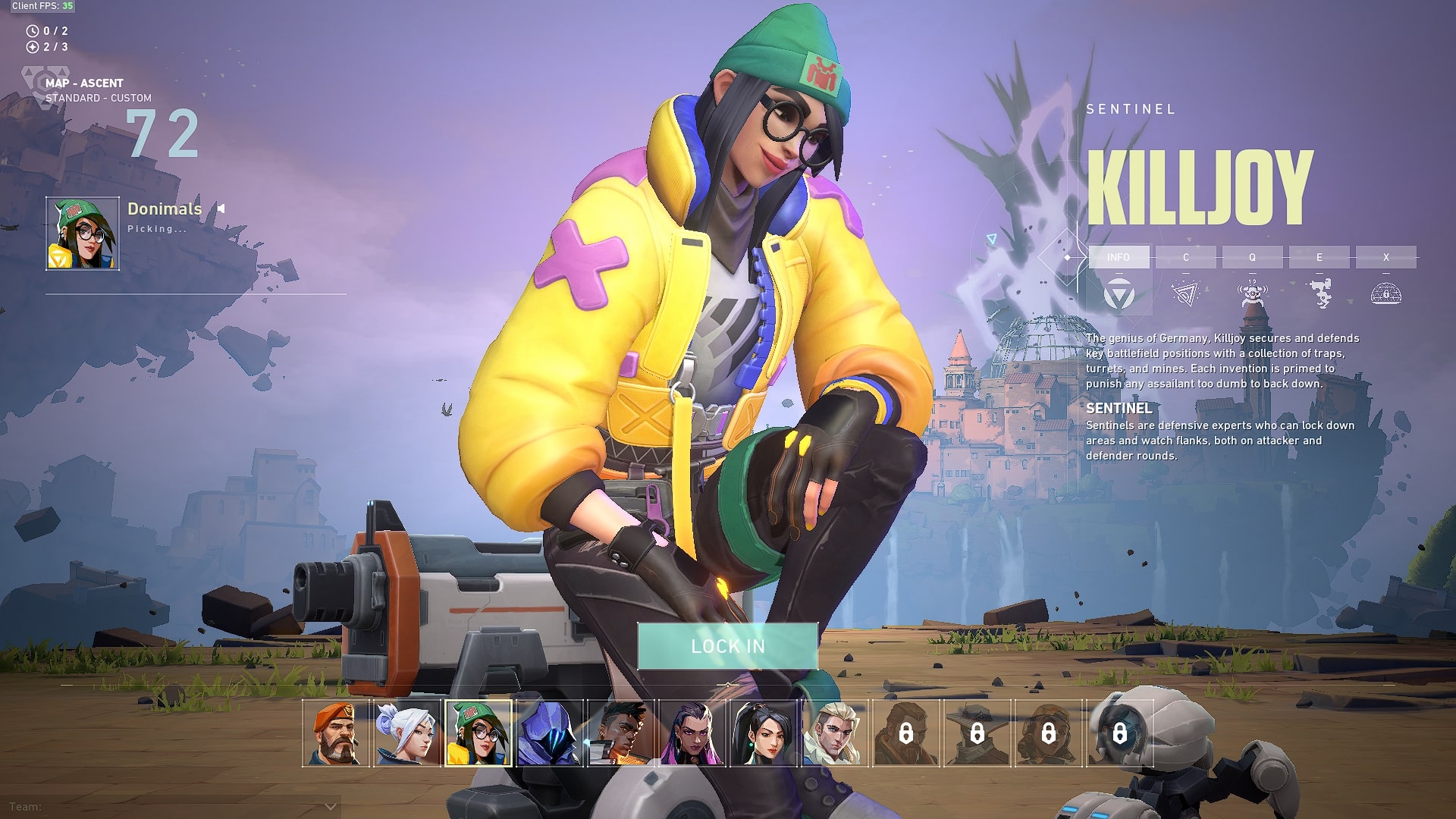 Killjoy is one of the characters in the game. (Image: Valorant)

The 12th Agent added in Valorant, Killjoy is yet another Sentinel type character. That is, its main role is to control areas. Their skills revolve around traps and turrets that can be positioned on the map to deal damage and get opponents’ attention. Like Cypher, Killjoy is a much better character used on the Defender side or, if Attacker, after the bomb is planted.

Within the game Valorant, in addition to choosing your character, the player will also have a variety of weapons to buy, select and defeat his opponents. With some of them inspired by the good old CS:GO and others bringing very unique characteristics. they must be chosen according to the player’s style and strategy for the round.

Bind is one of the maps available in Valorant. (Image: Riot Games)

The Bind map has two teleportation portals, which take players and projectiles instantly to another point in the environment. It also features two large bombsites and no central combat zone. Thus, it is a map with a smaller territory, but it ends up compensating this characteristic with the presence of the two portals.

Split is one of the maps available in Valorant. (Image: Riot Games)

Split is a typical FPS map, with two bombsites and several routes that allow different ways of advancing and that favor duels at certain points in the scenario. A high central area interconnects the two regions available for planting.

Haven is one of the maps available in Valorant. (Image: Riot Games)

On the Haven map, the defending team needs to protect three bombsites and not just two in Valorant. These points are close to each other, requiring less travel time between them. This ends up making life easier for the attackers, who have more fronts available for the plant. But it also gives the defense team more space to plan a counterattack.

Ascent is one of the maps available in Valorant. (Image: Riot Games)

Setting in Italy, the map has elements that refer to the country. Also with two bombsites, the scenario, which is the newest among the Valorant maps, has an open central part, and varied coverings and areas to hide. Learn more about the Valorant game.