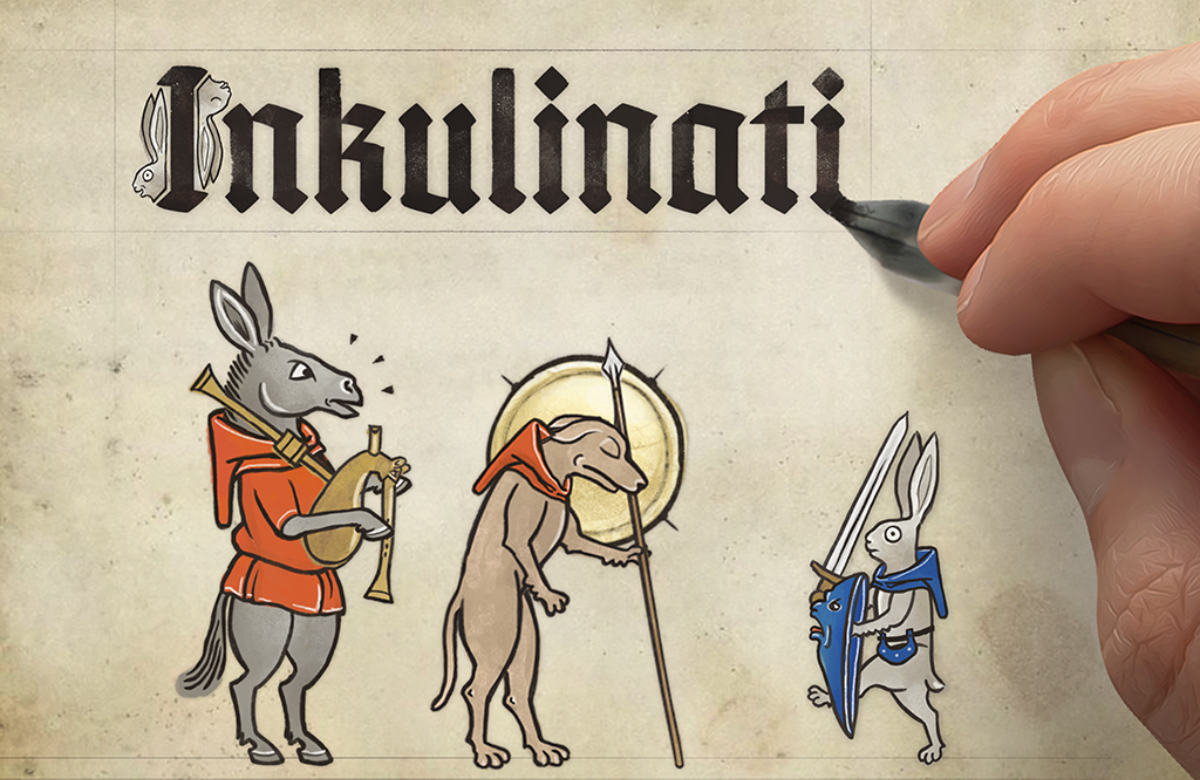 The medieval world just got more interesting, thanks to Yaza Game’s brainchild, Inkulinati. The ink-based strategy game grants you absolute powers as the Master of the Living Ink, where you build your strategy using a quill and a special kind of ink. In a medieval manuscript, anything is possible. The rabbits can be as deadly as knights, or snails devour human flesh. You are the master of the story, so you decide how things play out.

Since strategy is the game’s core, you can build your bestiary from a real-life inspired medieval marginalia and engage in duels. What’s more, the uncanny fights hold some humor. You may encounter dogs wielding spears or trumpets affixed to people’s bottoms. The bottom line, the game lets you relive the golden era of the manuscript with a modern twist. But before the game launches later this January, here are the five games like Inkulinati you can explore.

Roguelike games are never short on adventure. The genre started with a handful of games and now boasts a dozen, sparking the rise of subgenres. One such subgenre is the deckbuilding roguelike, which is the premise of our first game like Inkulinati, Doors of Insanity. Developed by OneShark, Doors Insanity is a hellish adventure into the abyss, which you can easily mistake for the devil’s abode.

The turn-based tactic game combines dice rolling with deck building. You play as an unnamed adventurer who wakes up in a dungeon. You then come across a deck of cards and a weapon to guide you through your trying journey through purgatory. The cards are instrumental in summoning allies and casting spells against peculiar enemies.

Furthermore, the deck has attack, defense, and support cards. Dealing the right set of cards or attacks will earn you a six-sided die reward. You can use the dice for attacks or defense. Moreover, you can play as many cards as you want during your turn. However, you shouldn’t surpass your base mana cost, which stands at 6. And since you don’t know what lies ahead, it’s best to save some for later. Also, there’s plenty for you to encounter in the game. “No sword is too big, no armor too thick, and no ally is too annoying!”.

King Arthur’s: Knight’s Tale is a riveting and solid infusion of an RPG and a turn-based tactical game. Developed by NeocoreGames, players live out the Arthurian fantasy in a modern re-tell of the chivalry era. Right off the bat, King Arthur’s: Knight Tale sells you medieval fantasy. From rescuing maidens, and fighting giants to slaying vicious dragons. The game is no short for action, with your favorite Arthurian characters making an appearance.

You play as Sir Modred, King Arthur’s sworn enemy. After a victorious slaying of King Arthur, he manages to strike, resulting in both your deaths. But is King Arthur really dead? The Lady of the Lake revives you to finish off what you started-kill King Arthur for good.

Aside from the intriguing storyline that bestows you the power to maim one of the greatest fictional characters in history, the game excels at creating the knight fantasy. You choose your knights from a roster of 30 heroes based on their five unique classes. What’s more, each class holds a unique trait. For instance, the heroes have sophisticated character progression and unquestionable loyalty. Then, one turn at a time, you issue commands to heroes in the battleground. Experience Avalon and Camelot in all their glory in this game, like Inkulinati.

The year is 1944. The streets of Warsaw are filled with Nazi occupying forces. You opt to fight back and enlist in the army. What’s more, you manage a group of army members to fight off the forces in this tactical RPG. When the odds are stacked against you, you’ll do pretty much anything to get the upper hand against your oppressor. You’ll need to form unlikely bonds to beat the enemy.

Moreover, you can enlist civilians to help wage war against the enemy. They all possess unique abilities and expertise, which will prove valuable against the German occupiers. Moreover, as a team captain, it is prudent to understand where your team excels and where it falls short. Find the right combination of skills, weapons, and personnel to beat the enemy. Don’t get it twisted; the fight won’t be easy, but don’t underestimate your team.

Furthermore, your primary goal is to turn your heroes into survivors. Traverse the Warsaw map and relive historical and fictional events during the city’s oppression. This act helps you uncover more about your heroes and decide when to stand guard and when to attack.

The realm is under attack. Do you have what it takes to defend your kingdom? Explore the medieval RPG fantasy with roguelike elements in Legend of Kingdom Rush by Ironhide Game Studio. After the kingdom falls under the control of the Dark Army, a greater force is now threatening the realm. This forces an unprecedented truce between the heroes to take down the extraplanar menace.

Legends of Kingdom Rush is the fifth installment in the Kingdom Rush series. The game uses turn-based combat that allows movement on a hex-based grid system. You manage a team of heroes against a nefarious enemy. Moreover, there are plenty of characters in the game awaiting your command. Find the right balance for your battles by matching and switching your companions and heroes.

Furthermore, there’s plenty of treasure to find and riddles to solve. Wage war through forests, mountains, and wastelands with over 100 narratives to explore. But beware; the choices you make have dire consequences.

Venture into the pilgrimage wastelands in this roguelike, turn-based deckbuilding game by Sharkbomb Studios. You play as an influential leader trusted by the bands of refugees and outcasts. Their survival lies in your hands. Scurry through different terrain and encounter enemies using turn-based card combat.

Your aim is to get to the mysterious crypt. Furthermore, the journey won’t be easy. Your best bet for survival is to build a troop of steadfast followers and venture into the unknown. Position your followers on the battleground and use convoy cards to defeat the enemy.

Moreover, you must always keep your team in tip-top shape. You’ll discover loot with resources that’ll make the journey a tad less tedious. Also, the game features procedurally generated maps with each game and over 300 cards up for discovery. This is one game, like Inkulinati, you won’t get tired of.

Inkulinati is set to launch on January 31, 2023. So, what’s your take on our picks for the five best games like Inkulinati? Let us know on our socials here or in the comments below.