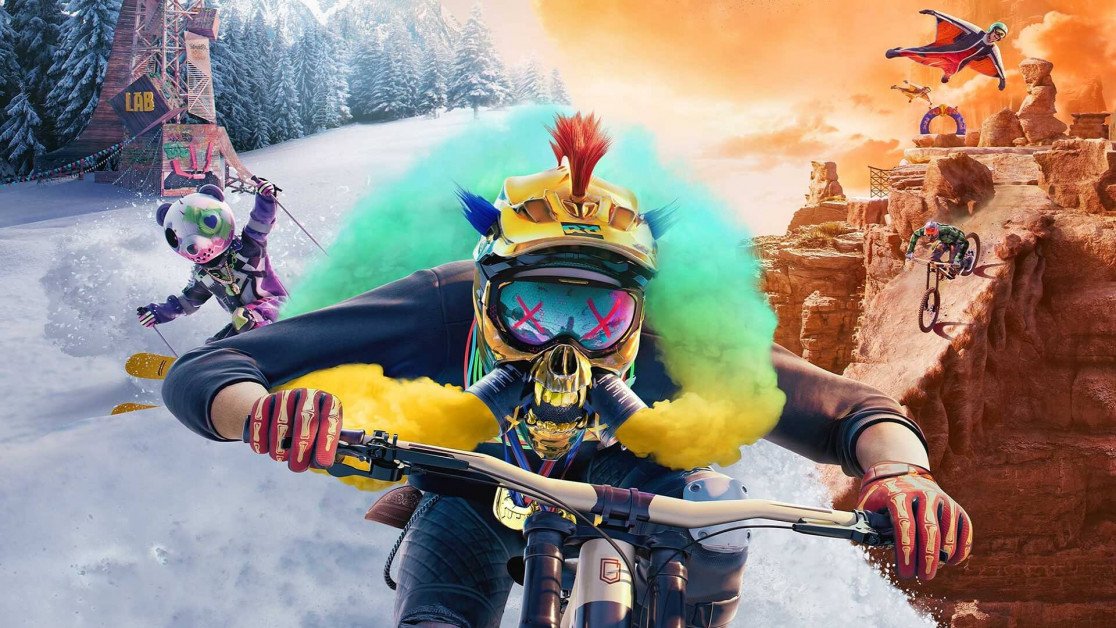 If you’re one for hitting the mud-glazed canyons and reaping the rewards that associate with hazardous trials, then you’re more than likely a keen biker of some sort. Us too, though, not quite as practical as real-life daredevils who risk life and limb for the sake of feeling an adrenaline rush first-hand. Nevertheless, we’re all for biking video games, and we only wish developers would spend more time crafting such worlds for the market.

Admittedly, there isn’t a huge selection to choose from when it comes to playable biking experiences. Perhaps an odd mountain biking chapter here and there, but not a great deal more. Having said that, there are five games that spring to mind when we think of such an extreme sport and its scattered contributions towards our corner of the world. And so, if you’re a genuine biking enthusiast with a shred of time to spare, then be sure to check these out.

Riders Republic is an all-in-one package that boasts an equal mixture of biking, skiing, and gliding. As a newcomer to the vibrant resort, you’re given the freedom to carve a legacy in any way you see fit, be it on dirt, ice, or sand. With an enormous amount of challenges based over a variety of regions, you too can join the revolution and establish roots in the booming community that is the Republic. But of course, it all starts with a handshake, a dream, and a daring sense of adventure.

In this open-world playground, you’ll find yourself flicking between board and bike as you traipse its highs and lows, searching for challenges to conquer as you build a name for yourself as an outside rider. There’s a whole lot of multiplayer madness to get involved in here, and an even greater amount of solo expeditions that range from risky to downright outrageous. All in all, it’s a venture worth taking, especially if you struggle to favor one sport over the other. On that basis, you might as well carve the whole hog.

Descenders is a downhill mountain biking game that shines brightest when slotted into its multiplayer mode. Although, technically, it’s the lobby area that brings the most entertainment, as it is basically a proving ground for players to showcase their skills and perform ludicrously dangerous stunts for bragging rights. Besides that, it’s a pretty stress-free cycling simulator.

While Descenders doesn’t bring that much to the table narrative-wise, it does deliver a pretty nifty progression system, and one that can quite easily consume a lot of your time depending on how far you’re willing to push yourself to reach an admirable spot up on the leaderboard. Of course, each race won is another upgrade in the bag, giving you an additional boost up the ladder. So, if you enjoy gradual progression with a multiplayer twist, then you’ll definitely enjoy this ride.

Downhill Domination was, at least for many, the game that kick-started an entire era of outrageous biking titles. It was an unusual mixture of mountain biking and, well, Road Rash. But that was the beauty of it; it was both rebellious and hazardous, and it brought a whole new level of fast-paced gameplay to the fold. Safety was out, and adrenaline-fueled shenanigans were in.

Unfortunately, playing Downhill Domination in 2022 will involve digging out some old hardware. Specifically, if you can you get your hands on a PlayStation 2, then you’re in the money. Failing that, then others will happily agree that Descenders is as close to an alternative as you’re probably going to get these days. Either way, you’ve got two quality choices right on your doorstep, and both provide an equal amount of nostalgia, period.

Lonely Mountains: Downhill is a—you guessed it—mountain biking game that features a more beginner-friendly approach to controls and visuals. Rather than bogging the game down with complex systems and death-defying downhill attractions, the cutesy title offers an accessible platform that practically anyone can flow with.

Downhill Domination it most certainly is not. But then, it doesn’t have to be, as it brings its own range of quirks and likeable patches to the table. Its simplistic design is compelling in its own way, and it’s made even more intriguing by the fact that it’s unintentionally built from Roblox and Trials, two very different strands that, when meshed together, create a spark unlike anything we’ve ever seen in the genre before.

After bathing in the success of its debut chapter, ASBO Interactive finally followed up with a sequel, Shred 2 – ft Sam Pilgrim. Like its original, the second part puts you in an open nexus comprised of over 40 jaw-droppingly beautiful settings, all of which beckon you to bust out a variety of gnarly combos for perks and points.

Being the creators that eventually went on to develop Descenders and Lonely Mountain: Downhill, fans can know what to expect when sinking into the world of Shred. It’s impressively authentic in its own special way, and it brings one of the most engaging MTB experiences of all-time, no doubt about it. With that, you should definitely devote some time to it, as it is arguably one of ASBO’s finest creations in the book to date.

Summer Game Fest 2022: 5 Games We Wish We Could Have Seen

FIFA vs PES: Which one is the Better?